The 1976 Republican presidential primaries were the selection process by which voters of the Republican Party chose its nominee for President of the United States in the 1976 U.S. presidential election. Incumbent President Gerald Ford was selected as the nominee through a series of primary elections and caucuses culminating in the 1976 Republican National Convention held from August 16 to August 19, 1976, in Kansas City, Missouri. 1976 was the first time that Republican primaries or caucuses were held in every state; the Democrats had previously done so in 1972.

Ford, the incumbent President, faced a very strong primary challenge from Ronald Reagan. The former California Governor was popular among the GOP's conservative wing. The race for the nomination was the last one by the Republicans not to have been decided by the start of the party convention.

Ford had been appointed to the vice-presidency after the resignation of Spiro Agnew in 1973 and then elevated to the presidency by the resignation of Richard Nixon in August 1974. His policy goals were often frustrated by Congress, which was heavily Democratic after the 1974 mid-term election. Democrats were especially infuriated by President Ford's decision to pardon Nixon for any criminal acts he committed or might have committed as part of the Watergate Scandal. Because Ford had not won a national election as President or Vice-President, he was seen by many politicians as being unusually vulnerable for an incumbent President, and as not having a strong nationwide base of support.

Reagan and the conservative wing of the Republican Party faulted Ford for failing to do more to assist South Vietnam (which finally collapsed in April 1975 with the fall of Saigon) and for his signing of the Helsinki Accords, which they took as implicit U.S. acceptance of Soviet domination over Eastern Europe. Conservatives were also infuriated by Ford's negotiations with Panama to hand over the Panama Canal.

Reagan began to criticize Ford openly starting in the summer of 1975, and formally launched his campaign in the autumn. Initially, it appeared as though Ford would easily win the GOP nomination; defying expectations, Ford narrowly defeated Reagan in the New Hampshire primary, and then proceeded to beat Reagan in the Florida and Illinois primaries by comfortable margins. By the time of the North Carolina primary in March 1976, Reagan's campaign was nearly out of money, and it was widely believed that another defeat would force Reagan to quit the race. However, assisted by the powerful political organization of U.S. Senator Jesse Helms, Reagan upset Ford in North Carolina and then proceeded to win a string of impressive victories, including Texas, where he carried all twenty-four congressional districts and won all ninety-six delegates at stake in the state's first binding primary. Four other delegates chosen at the Texas state convention went to Reagan and shut out U.S. Senator from Texas John G. Tower, who had been named to manage the Ford campaign on the convention floor. Ford bounced back to win in his native Michigan, and from there the two candidates engaged in an increasingly bitter nip-and-tuck contest for delegates. By the time the Republican Convention opened in August 1976 the race for the nomination was still too close to call.

This was the last time during the 20th century that a primary season had ended without a prohibitive nominee.

Before President Richard Nixon's resignation and the elevation of Gerald Ford to the presidency, a number of politicians were mentioned as possible Republican nominees to be Nixon's successor, most notably his first Vice President Spiro T. Agnew, before he resigned due to a separate scandal[3] or former Governor of Texas and Secretary of the Treasury John B. Connally (reportedly Nixon's favorite).[4]

After Ford's accession, many thought that he would not run in 1976, as he previously promised. Ford's vice president, Nelson Rockefeller, was mentioned as a possible nominee and reportedly seriously considered the idea.[5] Ford, however, decided to seek the nomination, and Rockefeller was replaced as vice presidential nominee.

Maryland Senator Charles Mathias expressed concerns with the state of his party leading up to the election, specifically its shift further to the right. Referring to the nomination contest between Ford and Ronald Reagan, Mathias remarked that the party leadership was placed "in further isolation, in an extreme—almost fringe—position". On November 8, 1975, he hinted at entering some presidential primary elections to steer the party away from what he saw as a strong conservative trend.[6] Over the next few months, Mathias continued to show signs of entering the election, but never campaigned aggressively and lacked any political organization.[7] Columnist George Will commented that Mathias was "contemplating a race—a stroll, really—for the presidency", in reference to his staid campaign.[8]

After four months of consideration, Mathias decided in March 1976 not to seek the presidency, and asked for his name to be withdrawn from the Massachusetts primary ballot, where it had been added automatically. He had also been considering an independent bid, but said raising money would be too difficult under campaign finance laws. Upon his withdrawal, Mathias stated he would work with the Republican Party in the upcoming elections.[9] However, despite his pledge to support the Republican candidate, Mathias' criticism of the party did not wane, stating that "over and over again during the primaries, I have felt uncomfortably like a member of the chorus in a Greek tragedy".[10]

Mathias' short candidacy did not endear him to the conservative wing of the Maryland Republican Party organization. In June 1976, he lost a vote by state Republicans to determine who would represent Maryland on the platform committee at the 1976 Republican National Convention. Instead, the group chose George Price, a conservative member of the Maryland House of Delegates from Baltimore County. At one point, Mathias was close to being denied attendance to the convention altogether as an at-large delegate, but a last minute compromise ensured all Republican congressional representatives seats as at-large delegates.[10] Mathias maintained a low profile during the convention, and received harsh criticism from some of the conservative delegates from Maryland who attended.[11] 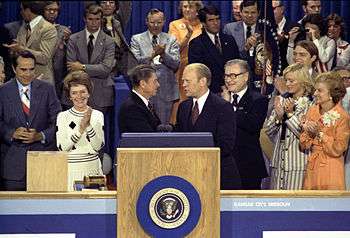 The 1976 Republican National Convention at Kemper Arena in Kansas City. Vice-Presidential Candidate Bob Dole is on the far left, then Nancy Reagan, former Governor Ronald Reagan is at the center shaking hands with President Gerald Ford, Vice-President Nelson Rockefeller is just to the right of Ford, followed by Susan Ford and First Lady Betty Ford. 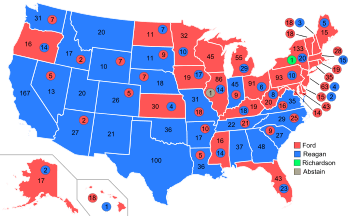 First ballot vote for the presidential nomination by state delegation.

The 1976 Republican National Convention was held in Kansas City. As the convention began, Ford was seen as having a slight lead in delegate votes, but still shy of the 1130 delegates he needed to win. Reagan and Ford both competed for the votes of individual delegates and state delegations. In a bid to woo moderate Northern Republicans, Reagan shocked the convention by announcing that if he won the nomination, Senator Richard Schweiker of Pennsylvania, from the northern liberal wing of the party, would be his running mate. The move backfired, however, as few moderates switched to Reagan, while many conservative delegates were outraged. The key state of Mississippi, which Reagan needed, narrowly voted to support Ford; it was believed that Reagan's choice of Schweiker had led Clarke Reed, Mississippi's chairman, to switch to Ford. Ford then won the nomination, narrowly, on the first ballot. He chose Senator Robert Dole of Kansas as his running mate. After giving his acceptance speech, Ford asked Reagan to come and say a few words to the convention; Reagan proceeded to give an eloquent address which virtually overshadowed Ford's speech.