The 1980 Republican presidential primaries were the selection process by which voters of the Republican Party chose its nominee for President of the United States in the 1980 U.S. presidential election. Former California Governor Ronald Reagan was selected as the nominee through a series of primary elections and caucuses culminating in the Republican National Convention held from July 14 to July 17, 1980, in Detroit, Michigan.

As the 1980 presidential election approached, incumbent Democratic President Jimmy Carter appeared vulnerable. High gas prices, economic stagflation, a renewed Cold War with the Soviet Union following the invasion of Afghanistan, and the Iran hostage crisis that developed when Iranian students seized the American embassy in Tehran all contributed to a general dissatisfaction with Carter's presidency. Likewise, the president faced stiff primary challenges of his own from Senator Ted Kennedy and California Governor Jerry Brown. A large field of Republican challengers soon emerged. Former Governor Ronald Reagan was the early odds-on favorite to win his party's nomination for president after nearly beating incumbent President Gerald Ford just four years earlier. He was so far ahead in the polls that campaign director John Sears decided on an "above the fray" strategy. He did not attend many of the multicandidate forums and straw polls in the summer and fall of 1979.

George H. W. Bush, the former director of the Central Intelligence Agency and chairman of the Republican National Committee, taking a page from the George McGovern/Jimmy Carter playbook, did go to all the so-called "cattle calls", and began to come in first at a number of these events. Along with the top two, a number of other Republican politicians entered the race.

In January 1980, the Iowa Republicans decided to have a straw poll as a part of their caucuses for that year. Bush defeated Reagan by a small margin. Bush declared he had "the Big Mo", and with Reagan boycotting the Puerto Rico primary in deference to New Hampshire, Bush won the territory easily, giving him an early lead going into New Hampshire.

With the other candidates in single digits, the Nashua Telegraph offered to host a debate between Reagan and Bush. Worried that a newspaper-sponsored debate might violate electoral regulations, Reagan subsequently arranged to fund the event with his own campaign money, inviting the other candidates to participate at short notice. The Bush camp did not learn of Reagan's decision to include the other candidates until the debate was due to commence. Bush refused to participate, which led to an impasse on the stage. As Reagan attempted to explain his decision, the editor of the Nashua Telegraph ordered the sound man to mute Reagan's microphone. A visibly angry Reagan responded, "I am paying for this microphone, Mr. Green!" [sic] (referring to the editor Jon Breen).[1][2][3] Eventually the other candidates agreed to leave, and the debate proceeded between Reagan and Bush. Reagan's quote was often repeated as "I paid for this microphone!" and dominated news coverage of the event; Reagan sailed to an easy win in New Hampshire.[4] 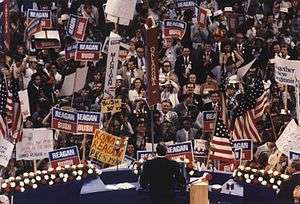 Ronald Reagan delivering his acceptance speech at the Republican National Convention in Detroit, Michigan, on July 17, 1980.

Heading into the South Carolina primary, political operative Lee Atwater worked to engineer a victory for Reagan. "Lee Atwater figured that Connally was their biggest threat here in South Carolina. So Lee leaked a story to me that John Connally was trying to buy the black vote. Well, that story got out, thanks to me, and it probably killed Connally. He spent $10 million for one delegate. Lee saved Ronald Reagan's candidacy", said Lee Bandy, a writer for the South Carolina newspaper The State.[5]

Reagan swept the South, and although he lost five more primaries to Bush—including the Massachusetts primary in which he came in third place behind John B. Anderson—the former governor had a lock on the nomination very early in the season. Reagan said he would always be grateful to the people of Iowa for giving him "the kick in the pants" he needed.

Reagan was an adherent to a policy known as supply-side economics, which argues that economic growth can be most effectively created using incentives for people to produce (supply) goods and services, such as adjusting income tax and capital gains tax rates. Accordingly, Reagan promised an economic revival that would benefit all sectors of the population. He said that cutting tax rates would actually increase tax revenues because the lower rates would cause people to work harder as they would be able to keep more of their money. Reagan also called for a drastic cut in "big government" and pledged to deliver a balanced budget for the first time since 1969. In the primaries Bush memorably called Reagan's economic policy "voodoo economics" because it promised to lower taxes and increase revenues at the same time.

The following potential candidates declined to run for the Republican nomination in 1980.[6][7]

The Republican National Convention was held in Detroit, Michigan, from July 14 to July 17, 1980.