The 2002 Nobel Peace Prize was awarded to Jimmy Carter "for his decades of untiring effort to find peaceful solutions to international conflicts".[1] 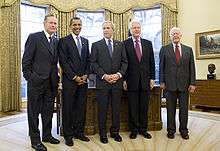 Carter has been involved in a variety of national and international public policy, conflict resolution, human rights and charitable causes. In 1982, he established The Carter Center in Atlanta to advance human rights and alleviate human suffering. The non-profit, nongovernmental Center promotes democracy, mediates and prevents conflicts, and monitors the electoral process in support of free and fair elections. It also works to improve global health through the control and eradication of diseases such as Guinea worm disease, river blindness, malaria, trachoma, lymphatic filariasis, and schistosomiasis. It also works to diminish the stigma of mental illnesses and improve nutrition through increased crop production in Africa.

A major accomplishment of The Carter Center has been the elimination of more than 99 percent of cases of Guinea worm disease, from an estimated 3.5 million cases in 1986 to 148 reported cases in 2013.[2] The Carter Center has monitored 96 elections in 38 countries since 1989.[3] It has worked to resolve conflicts in Haiti, Bosnia, Ethiopia, North Korea, Sudan and other countries. Carter and the Center support human rights defenders around the world and have intervened with heads of state on their behalf.

In 2002, President Carter received the Nobel Peace Prize for his work "to find peaceful solutions to international conflicts, to advance democracy and human rights, and to promote economic and social development" through The Carter Center.[4] Three sitting presidents, Theodore Roosevelt, Woodrow Wilson, and Barack Obama, have received the prize; Carter is unique in receiving the award for his actions after leaving the presidency. He is, along with Martin Luther King, Jr., one of only two native Georgians to receive the Nobel.

This article is issued from Wikipedia - version of the 10/8/2014. The text is available under the Creative Commons Attribution/Share Alike but additional terms may apply for the media files.