This article is about the Northern Ireland political leader. For the US politician, see David Trimble (congressman).

Trimble began his career as a Professor of Law at The Queen's University of Belfast in the 1970s, during which time he began to get involved with the paramilitary-linked Vanguard Progressive Unionist Party. He was elected to the Northern Ireland Constitutional Convention in 1975, and joined the UUP in 1978 after the VPUP disbanded.[3] Remaining at Queen's University, he continued his academic career until being elected as the MP for Upper Bann in 1990. In 1995 he was unexpectedly elected as the leader of the UUP.[3] He was instrumental in the negotiations that led to the Good Friday Agreement in 1998, and (along with John Hume) won the Nobel Peace Prize that year for his efforts. He was later elected to become the first First Minister of Northern Ireland, although his tenure was turbulent and frequently interrupted by disagreements over the timetable for Provisional Irish Republican Army decommissioning.

After being defeated at the 2005 general election, Trimble resigned the leadership of the UUP soon afterwards. In June 2006, he accepted a life peerage in the House of Lords, taking the title of Baron Trimble, of Lisnagarvey in the County of Antrim.[4] He did not stand again for the Assembly, which finally reconvened in 2007, instead leaving the UUP to join the Conservative Party.[5]

Trimble was the son of William and Ivy Trimble, lower-middle class Presbyterians who lived in Bangor, County Down.[6][7] He attended Bangor Grammar School (1956–63).[8] Trimble's paternal grandfather George was a native of County Longford.

He studied at Queen's University of Belfast (QUB) from 1964 to 1968, where he was awarded the McKane Medal for Jurisprudence.[8] He received a first class honours degree (the first at Queen's in three years), becoming a Bachelor of Laws (LL.B).[9][10]

Trimble qualified as a barrister in 1969. He began that year as a Queen's University of Belfast lecturer, subsequently becoming Assistant Dean of the law faculty from 1973–75, a Senior Lecturer in 1977, and Head of the Department of Commercial and Property Law from 1981 to 1989.[8][11][12][13] He resigned from the university in 1990 when he was elected to Parliament.[8]

In 1983, as he sat in his office at the university, he heard gunshots which turned out to be those of IRA killers of Edgar Graham, a friend and fellow law professor.[13] He was asked to identify the body.[13] In 1994 he was told by the Royal Ulster Constabulary that he had been targeted for assassination.[13]

Trimble became involved with the right-wing, paramilitary-linked Vanguard Progressive Unionist Party (known as Vanguard) in the early 1970s. He ran unsuccessfully for the party in the 1973 Assembly election for North Down, coming last.[14] In 1974, he was a legal adviser to the Ulster Workers' Council during the successful UWC strike against the Sunningdale Agreement.[15]

He was elected to the Northern Ireland Constitutional Convention in 1975 as a Vanguard member for Belfast South, and for a time he served as the party's joint deputy leader, along with the Ulster Defence Association's Glenn Barr.[16] The party had been established by Bill Craig to oppose sharing power with Irish Nationalists, and to prevent closer ties with the Republic of Ireland; however Trimble was one of those to back Craig when the party split over Craig's proposal to allow voluntary power sharing with the SDLP.

He joined the mainstream Ulster Unionist Party (UUP) in 1978 after Vanguard disbanded, and was elected one of the four party secretaries.[10][16] He served as Vice Chairman of the Lagan Valley Unionist Association from 1983–85, and was named chairman in 1985.[11] In, He served as chairman of the UUP Legal Committee from 1989–1995 and as honorary secretary of the Ulster Unionist Council in 1990–96.[11]

He was elected to Parliament with 58% of the vote in a by-election in Upper Bann in 1990.[16][17][18] He was one of the few British politicians who urged support for the Islamic government of Bosnia and Herzegovina during the civil war in the 1990s.

Leader of the Ulster Unionist Party

On 8 September 1995, Trimble unexpectedly won election as Leader of the UUP, defeating the front-runner John Taylor and three other candidates.[12][19]

A mural in Northern Ireland supporting the Portadown Orangemen

Trimble's election as Leader came in the aftermath of his role in the Drumcree conflict, in which he led a controversial 1995 Orange Order Protestant march, amidst Nationalist protest, down the predominantly Roman Catholic Nationalist Garvaghy Road in Portadown, County Armagh.[6][12] Trimble and Democratic Unionist Party Leader Ian Paisley walked hand-in-hand as the march, banned since 1997, proceeded down the road.[20] Many Irish Catholics viewed it as insensitive, while many Protestants felt that it was a sign that Trimble was defending them.[12]

Shortly after the election, Trimble became the first UUP Leader in 30 years to meet with the Taoiseach in Dublin.[12] In 1997, he became the first unionist leader since the partitioning of Ireland in 1922 to agree to negotiate with Sinn Féin.[21]

Later, in the All Party negotiations, he led the UUP delegation and sat at the table with Sinn Féin, though in the eight months of the negotiations he never spoke directly to their leader, Gerry Adams.[6][11] The talks were successful, culminating in the Belfast Agreement of 10 April 1998, which resulted in power-sharing with Nationalists.[10][11] On 22 May 1998, voters in Northern Ireland approved the agreement, with 71 per cent in favour.[11]

Trimble was appointed to the Privy Council of the United Kingdom in the 1998 New Year Honours.[22][23]

Trimble at first opposed the appointment of former U.S. Senator George J. Mitchell as the chairman of multi-party talks, but eventually accepted him. The talks resulted in the Belfast (Good Friday) Agreement (GFA) of April 1998.[24] Trimble was subsequently seen as instrumental in getting his party to accept the accord.[25] 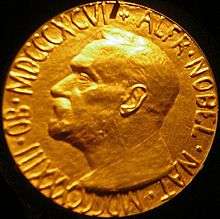 In October 1998, Trimble and John Hume were awarded the Nobel Peace Prize for their efforts to find a peaceful solution to the conflict in Northern Ireland.[27] The Nobel Institute noted:

As the leader of the traditionally predominant party in Northern Ireland, David Trimble showed great political courage when, at a critical stage of the process, he advocated solutions which led to the [Belfast (Good Friday)] peace agreement.[27]

Arguments over the extent of Provisional Irish Republican Army decommissioning led to repeated disruptions during Trimble's tenure as First Minister. In particular:

In 1998, Tony Blair announced a new judicial inquiry, the Bloody Sunday Inquiry, into the killing of 14 unarmed civil rights marchers in Derry in 1972. A previous investigation, the Widgery Tribunal, into the same event had been discredited. During the debate in the House of Commons, Trimble was one of few dissenting voices. He said "I am sorry to have to say to the Prime Minister that I think that the hope expressed by the hon. Member for Foyle (Mr. Hume) that this will be part of the healing process is likely to be misplaced. Opening old wounds like this is likely to do more harm than good. The basic facts of the situation are known and not open to dispute."[30] Reporting in 2010, The Saville Inquiry confirmed that all of the 14 killings and 13 woundings were unjustified.

The House of Lords meets in the Palace of Westminster

On 11 April 2006, it was announced that Trimble would take a seat in the House of Lords as a working life peer, as an appointed member of the Peerage whose title may not be inherited.[31] On 21 May 2006 it was announced that he had chosen the geographical designation Lisnagarvey, the original name for his adopted home town of Lisburn. Subsequently, on 2 June 2006, he was created Baron Trimble, of Lisnagarvey in the County of Antrim.[32]

On 18 December 2006, he announced that he would be standing down from the Northern Ireland Assembly at the next election.[33]

On 17 April 2007, Trimble announced he had decided to join the Conservative Party in order to have greater influence in politics in the United Kingdom.[5] At the same time, however, he stated that he did not intend to campaign against the Ulster Unionist Party, and proposed the idea of a future alliance between the Conservatives and the Ulster Unionists, similar to that which had existed prior to 1974 and the fallout of the Sunningdale Agreement. This idea became reality with the formation of Ulster Conservatives and Unionists – New Force in late 2008. It was reported that if the Conservatives won the 2010 general election, Trimble would receive a "significant" ministerial role, possibly in the Cabinet.[34] In the event, however, Trimble was not offered any governmental or front bench position following the formation of the Conservative-Liberal Democrat coalition government.

In 2016 Trimble supported the Leave side in the UK referendum on EU membership. He said that if he had ever had any doubts about the issue, 'his eight years on the EU Select Committees in the House of Lords – which scrutinise the EU’s operations – had convinced him of the need to cut ties with Brussels'. He cited a study which found that economic growth in the UK reduced after the decision to enter the Common Market, and reduced further when the UK went into the Single Market.[37] 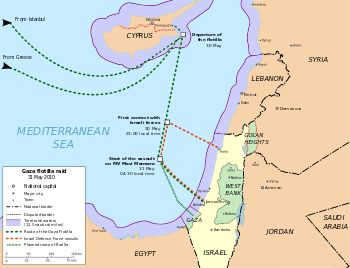 Routes of Gaza-bound flotilla (green) and Israeli Navy (orange)
For more details on this topic, see Legal assessments of the Gaza flotilla raid.

On 14 June 2010, he was appointed as an observer to the Israeli special independent public Turkel Commission of Inquiry into the Gaza flotilla raid.[38][39]

On the Commission were former Israeli Supreme Court Justice, Jacob Turkel, and former Technion University President, Amos Horev, as well two other members added in July 2010. (Bar Ilan University Professor of International Law Shabtai Rosenne also served on the Commission from its establishment until his death on 21 September 2010.[40]) In addition, the Commission had two foreign observers, Trimble and former head of the Canadian military's judiciary, Judge Advocate General, Ken Watkin, who took part in hearings and discussions, but did not vote on the final conclusions.[41][42] The panel, in January 2011, concluded both Israel’s naval blockade of Gaza and the interception of the flotilla “were found to be legally pursuant to the rules of international law”.[43]

Trimble's first marriage, to Heather McComb in August 1968, ended in divorce in 1976. There were no children from his first marriage. Trimble married a former student, Daphne Elizabeth (née Orr), in August 1978. They have two sons and two daughters (Richard, Victoria, Nicholas, and Sarah).[7] Lady Trimble served as a member of the Equality Commission for Northern Ireland, and later the Northern Ireland Human Rights Commission, before standing unsuccessfully in the UK Parliamentary election of May 2010 for the UCUNF.

His son Nicholas is active within the Ulster Unionist Party. In 2016 Nicholas Trimble was co-opted to replace Alexander Redpath as a Councillor representing Downshire West on Lisburn and Castlereagh City Council.