The Nansen International Office for Refugees (French: Office International Nansen pour les Réfugiés) was an organization established in 1930 by the League of Nations and named after Fridtjof Nansen, soon after his death, which was internationally in charge of refugees from war areas between 1930 and 1939. It is noted for developing the Nansen passport which allowed stateless people to travel between countries. It received the Nobel Peace Prize in 1938.[1][2] 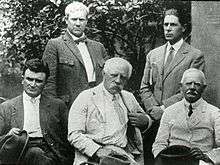 The Armenia commission of the League of Nations. From left, on the first row are G. Carle, Fridtjof Nansen and C.E. Dupuis. In the background are Vidkun Quisling (left) and Pio Le Savio (right).

The Office International Nansen pour les Réfugiés was established in 1930 by the League of Nations, shortly after the death of its name patron Fridtjof Nansen to continue his successful work in international aid for refugee. It thus continued the organization in Geneva, Switzerland, founded by Nansen in 1921.[3] The League also provided the administrative expenses for the Nansen Office though only for fees charged for the Nansen passport since its revenues for welfare and relief were obtained from private contributions.

The organization was to supply material and political support to refugees. For refugees from the Third Reich or from the civil war-torn Spain, the Nansen aid was not applicable, though many countries refused to accept the refugees.

In spite of such problems, the Nobel Peace Prize was awarded to the organization in 1938 for its work, but due to its dissolution shortly afterwards, the prize money was received by a newly founded refugee organization of the League of Nations. The office was dissolved at the same time as the League dissolved the High Commission (established in 1933) because of the problems surrounding German refugees after the dissolution of the Third Reich.

The Nansen Office accomplished numerous tasks while it existed. One example is that the Office was responsible for the adoption by fourteen countries of the 1933 Refugee Convention which was a modest charter of human rights.

The Nansen Office was instrumental in finding shelter in specially constructed houses in villages in Syria and Lebanon for 40,000 Armenians, after the resettlement of another 10,000 in Erivan.

The Office was also responsible for the successful settlement of the Saar refugees in Paraguay after 1935.