This article is about the Prime Minister of Japan. For the governor of Fukushima Prefecture of Japan of the same name, see Eisaku Satō (governor).
In this Japanese name, the family name is Satō. 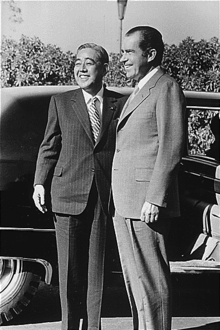 Satō negotiated with U.S. president Richard M. Nixon for the repatriation of Okinawa.

Satō was born in Tabuse, Yamaguchi Prefecture, on 27 March 1901 and studied German law at Tokyo Imperial University. In 1923, he passed the senior civil service examinations, and in the following year, upon graduation, became a civil servant in the Ministry of Railways. He served as Director of the Osaka Railways Bureau from 1944 to 1946 and Vice-Minister for Transportation from 1947 to 1948.[1]

Satō entered the Diet in 1949 as a member of the Liberal Party.

After the Liberal Party merged with the Japan Democratic Party to form the Liberal Democratic Party, Satō served as chairman of the party executive council from December 1957 to June 1958. Satō became minister of finance in the cabinets of Nobusuke Kishi (his brother) and Hayato Ikeda.

From July 1961 to July 1962, Satō was minister of international trade and industry. From July 1963 to June 1964 he was concurrently head of the Hokkaidō Development Agency and of the Science and Technology Agency, and was also state minister in charge of organizing the 1964 Summer Olympics held in Tokyo.

Satō succeeded Ikeda after the latter resigned due to ill health. His government was longer than many, and by the late 1960s he appeared to have single-handed control over the entire Japanese government. He was a popular prime minister due to the growing economy; his foreign policy, which was a balancing act between the interests of the United States and China, was more tenuous. Student political radicalization led to numerous protests against Satō’s support of the United States–Japan Security Treaty, and Japanese tacit support for American military operations in Vietnam. These protests expanded into massive riots, which eventually forced Satō to close the prestigious University of Tokyo for a year in 1969.[2]

After three terms as prime minister, Satō decided not to run for a fourth. His heir apparent, Takeo Fukuda, won the Sato faction's support in the subsequent Diet elections, but the more popular MITI minister, Kakuei Tanaka, won the vote, ending the Satō faction's dominance.

Relations with mainland China and Taiwan

Satō is the last Prime minister of Japan to visit Taiwan during his term. In 1965, Satō approved a US$150 million loan to Taiwan. He visited Taiwan in 1967. In 1969, Satō insisted that the defense of Taiwan was necessary for the safety of Japan. Satō followed the United States in most major issues, but Satō opposed the Nixon visit to China.[3] Satō also bitterly opposed the entry of the PRC into the United Nations in 1971.

Satō introduced the Three Non-Nuclear Principles on 11 December 1967, which means non-production, non-possession, and non-introduction of nuclear weapons. He later suggested the "Four-Pillars Nuclear Policy". During the prime ministership of Satō, Japan entered the Nuclear Non-Proliferation Treaty. The Diet passed a resolution formally adopting the principles in 1971. For this he received the Nobel Peace Prize in 1974.

However, recent inquiries show that behind the scenes, Satō was more accommodating towards US plans of stationing nuclear weapons on Japanese soil. In December 2008, the Japanese government declassified a document showing that during a visit to the US in January 1965, he was discussing with US officials the possibility of using nuclear weapons against the People's Republic of China.[4] In December 2009, his son reported that his father agreed in a November 1969 conversation with US President Nixon to allow the stationing of nuclear warheads in Okinawa once it was restored to Japanese sovereignty.[5]

Since the end of the Second World War, Okinawa had been occupied by the United States. While visiting the United States in January 1965, Satō openly asked President Lyndon Johnson to return Okinawa to Japan. In August 1965, Satō became the first post-war prime minister of Japan to visit Okinawa.

In 1969, Satō struck a deal with U.S. president Richard Nixon to repatriate Okinawa and remove its nuclear weaponry: this deal was controversial because it allowed the U.S. forces in Japan to maintain bases in Okinawa after repatriation.[6] Okinawa was formally returned to Japan on 15 May 1972, which also included the Senkaku Islands (also known as the Diaoyu Islands in China and the subject, since 1971, of a Sino-Japanese sovereignty dispute; see Senkaku Islands dispute).

During Satō's term, Japan participated in the creation of the Asian Development Bank in 1966 and held a ministerial level conference on Southeast Asian economic development.[7] It was the first international conference sponsored by the Japanese government in the postwar period. In 1967, he was also the first Japanese prime minister to visit Singapore. He was largely supportive of the South Vietnamese government during throughout the Vietnam War.

Satō shared the Nobel Peace Prize with Seán MacBride in 1974. He was awarded for representing the Japanese people's will for peace, and for signing the nuclear arms Non-Proliferation Treaty in 1970.[8] He was the first Asian to accept the Nobel Peace Prize. (In 1973, Vietnamese politician Le Duc Tho had become the first Asian to win the prize, but Tho had rejected it.[9])

While at a restaurant on 19 May 1975, Satō suffered a massive stroke, resulting in a coma. He died at 12:55 a.m. on 3 June at the Jikei University Medical Center, aged 74. After a public funeral, his ashes were buried in the family cemetery at Tabuse.

Satō was posthumously honored with the Collar of the Order of the Chrysanthemum, the highest honor in the Japanese honors system.

Satō married Hiroko Matsuoka, the daughter of diplomat Yōsuke Matsuoka, in 1926 and had two sons, Ryūtarō and Shinji. In a 1969 Shukan Asahi interview with novelist Shūsaku Endō, his wife accused him of being a rake and a wife-beater.[11] His hobbies included golf, fishing, and the Japanese tea ceremony.[1] The 37th prime minister of Japan, Nobusuke Kishi was his older brother and the current prime minister, Shinzō Abe was his great-nephew.[12] Both prime minister Satō and his wife, Hiroko Matsuoka, are descendants of samurai.