The 2014-15 Oman Professional League (known as the Omantel Professional League for sponsorship reasons) was the 39th edition of the top football league in Oman. The season began on 11 September 2014, and concluded on 28 May 2015.[1][2] Al-Nahda Club were the defending champions, having won their third title in the previous 2013–14 season.[3] On Saturday, 9 May 2015, Al-Oruba SC were crowned the champions of the 2014–15 Oman Professional League with three games to spare after Sur SC was held to a 2-2 draw by Al-Suwaiq Club at the Al-Seeb Stadium. Al-Oruba who had beaten Sohar SC, 1-0 on Friday took their tally to 48 points from 23 matches, gaining an unassailable lead of eight points ahead of second-placed Sur. Sur, which needed to win on Saturday to keep their title hopes alive, and settled for one point to take its tally to 40 points, helping the fierce rivals from Sur city to win their 4th domestic title.[4][5][6][7][8]

This season the league has 14 teams. Majees SC and Al-Ittihad Club were relegated to the First Division League after finishing in the relegation zone in the 2013–14 season. Al-Nasr S.C.S.C. however again managed to play in the top division as they won the Relegation/Promotion playoff against Al-Mudhaibi Club. The two relegated teams were replaced by First Division League winners Al-Khabourah SC, runners-up Bowsher Club. 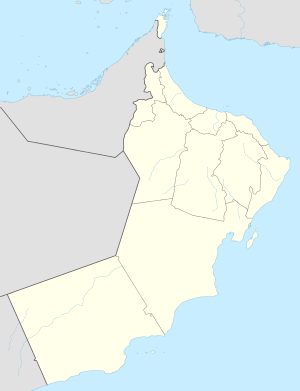 Bowsher
Locations of teams in the 2014–15 Omani League

Note: Flags indicate national team as has been defined under FIFA eligibility rules. Players may hold more than one non-FIFA nationality.

Source: League Table
Rules for classification: 1) points; 2) goal difference; 3) number of goals scored
1On 11 December 2014, defending champions Al-Nahda failed to turn up against Dhofar in an OPL match at the Al-Saada Stadium in Salalah; the Oman Professional League's Disciplinary Committee handed the result of the abandoned match in favour of Dhofar (3-0) and docked Al-Nahda a total of nine points - three for skipping the December 11 fixture and six more as penalty.[52] However, on 21 May 2015, OFA's Court of Arbitration announced the verdict to reinstate Al-Nahda's six points that were docked after it pulled out of the OPL match against Dhofar and also announced that a rematch must be played between the two teams on 28 May 2015 at the Al-Saada Stadium in Salalah.[53][54][55][56][57]

2On 20 May 2015, Dhofar's club management, showing a friendly and supportive nature, requested the Oman Football Association to shift their last home game of the season against Al-Seeb from Al-Saada Stadium in Salalah to Muscat Club's home ground in Muscat so that Al-Seeb team gets adequate time to prepare themselves for the finals of the 2015 GCC Champions League and thus consequently the date of the fixture was changed from 25 May 2015 to 24 May 2015.[58]
(C) = Champion; (R) = Relegated; (P) = Promoted; (E) = Eliminated; (O) = Play-off winner; (A) = Advances to a further round.
Only applicable when the season is not finished:
(Q) = Qualified to the phase of tournament indicated; (TQ) = Qualified to tournament, but not yet to the particular phase indicated; (RQ) = Qualified to the relegation tournament indicated; (DQ) = Disqualified from tournament.

Source: Results
1 ^ The home team is listed in the left-hand column.
Colours: Blue = home team win; Yellow = draw; Red = away team win.
For coming matches, an a indicates there is an article about the match.

The league was the subject of controversies like the refusal of Omani referees to officiate in the league matches and boycott of the Professional League by clubs.

Before the beginning of the 2014-15 season, 9 top clubs of the Oman Professional League demanded the cancellation of the Professional League. It was reported that the presidents of the 9 clubs (Al-Oruba, Dhofar, Al-Seeb, Al-Nahda, Fanja, Bowsher, Sohar, Al-Shabab and Sur) held a meeting in the head office of Sur SC on 7 June 2014 in order to discuss the experience of different clubs of the professional league. The statement released by the clubs after this meeting sparked a wave of controversy as all these 9 clubs decided to hold a meeting with Sayyid Khalid Al-Busaidi, Chairman of the Oman Football Association and demand the cancellation of the 2014-15 season of the Oman Professional League. The reason given out was that the clubs were unable to meet the financial demands laid out by the association and also that the association failed to fulfill the promises made before the beginning of the pro-league system.[65]

In a major embarrassment for the Oman Football Association (OFA), all its top-division referees boycotted the three-day opening round of the prestigious Omantel Professional League (OPL), which began on 11 September 2014, over a payment issue. This was the first ever instance in Oman of OFA-accredited referees boycotting top-flight domestic league matches over a stand-off. The referees refused to officiate in the opening-round matches on 11 September 2014, 12 September 2014 and 13 September 2014 over long-standing bonus payments from the OFA. The row over pending bonus payments for the referees had been brewing since the conclusion of the inaugural edition of OPL last season. The first round match between Sur SC and Al-Seeb Club was postponed from the scheduled time to another time and the match between Dhofar S.C.S.C. and Al-Khaboora SC which was also scheduled to be held on the 11th of September was postponed to the next day because of the refusal of Omani referees to officiate in the league matches. The OFA, under the chairmanship of Sayyid Khalid al Busaidy, managed to defuse the crisis by requesting the UAE football body to send match officials to get the OPL started. UAE duly responded, sending 16 officials - eight referees and eight linesmen - who officiated in the seven opening-round matches that went ahead as scheduled from Thursday to Saturday at various venues in Oman.[66][67][68]

On 11 December 2014, defending champions Al-Nahda failed to turn up against Dhofar in an OPL match at the Al-Saada Stadium in Salalah; the Oman Professional League's Disciplinary Committee handed the result of the abandoned match in favour of Dhofar (3-0) and docked Al-Nahda a total of nine points - three for skipping the December 11 fixture and six more as penalty.[69]

On 11 February 2015, 4 (Al-Musannah, Al-Seeb, Bowsher and Fanja) out of the 14 clubs participating in the 2014–15 Oman Professional League along with 8 other Omani clubs decided to go ahead with their demand for an Extraordinary General Meeting (EGM) with the aim of introducing a no-confidence motion against the association's board members.[70]

On 7 March 2015, 10 out of 39 clubs attending a consultative meeting of the OFA walked out in protest midway into the proceedings. walkout was triggered by the OFA's decision to call off an Extraordinary General Meeting (EGM), which was originally scheduled for 7 March 2015. However, the OFA which had previously agreed for an EGM, on 6 March 2015 shelved the summit, citing a letter from the FIFA, football’s world governing body.[71] On the very next day, the OFA cancelled the membership of 11 clubs (Ahli Sidab, Al-Ittifaq, Al-Kamel Wa Al-Wafi, Al-Musannah, Al-Seeb, Bowsher, Dhofar, Fanja, Ibri, Ja'lan and Nizwa) for illegally withdrawing from the consultative meeting conducted by the OFA.[72][73]