Guangzhou Evergrande won the final 1–0 on aggregate and earned the right to represent the AFC at the 2015 FIFA Club World Cup, entering at the quarterfinal stage.

The Al-Rashid Stadium hosted first leg of the final. 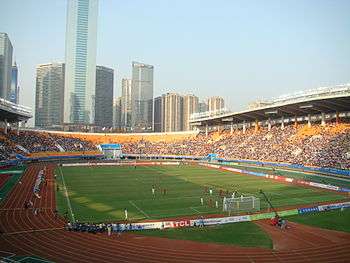 The Tianhe Stadium hosted second leg of the final.

The 2015 AFC Champions League Final is contested in two-legged home-and-away format, held at the home of both finalists. It is the third consecutive year that the AFC adopted such an arrangement.

Al-Ahli's home venue, Al-Rashid Stadium, is a 9,415 seated stadium located in the city of Dubai.[3]

Guangzhou Evergrande's home venue, Tianhe Stadium, is a 58,500 seated stadium located in the city of Guangzhou.

In the history of the competition, two finals have been held in China and this final will be the third, and the second that Guangzhou hosted. The first final hosted by a Chinese city in 1989–90, which was won by Chinese side Liaoning FC 3–2 against Nissan Yokohama in the city of Shenyang. The next final, the 2013 and second leg of the 2013, was hosted in Guangzhou. The 2013 final was won by Guangzhou Evergrande on the away goals rule with 3–3 on aggregate.

Road to the final

For more details on this topic, see 2015 AFC Champions League.

Note: In all results below, the score of the finalist is given first (H: home; A: away).

The final was played on a home-and-away two-legged basis, with the order of legs decided by draw. The away goals rule, extra time (away goals do not apply in extra time) and penalty shoot-out were used to decide the winner if necessary.[4]