The 2K22 Tunguska (Russian: 2К22 "Тунгуска"; English: Tunguska) is a Russian tracked self-propelled anti-aircraft weapon armed with a surface-to-air gun and missile system. It is designed to provide day and night protection for infantry and tank regiments against low-flying aircraft, helicopters, and cruise missiles in all weather conditions. Its NATO reporting name is SA-19 "Grison".

Development of the 2K22 anti-aircraft system began on 8 June 1970. At the request of the Soviet Ministry of Defence, the KBP Instrument Design Bureau in Tula, under the guidance of the appointed Chief Designer A. G. Shipunov, started work on a 30mm anti-aircraft system as a replacement for the 23mm ZSU-23-4.[3]

The project, code-named "Tunguska", was undertaken to improve on the observed shortcomings of the ZSU-23-4 (short range and no early warning) and a counter to new ground attack aircraft in development, such as the A-10 Thunderbolt II, which was designed to be highly resistant to 23 mm cannons.[4] Studies were conducted and demonstrated that a 30 mm cannon would require from a third to a half of the number of shells that the 23 mm cannon of the ZSU-23-4 would need to destroy a given target, and that firing at a MiG-17 (or similarly at, in case of war, NATO's Hawker Hunter or Fiat G.91) flying at 300 m/s, with an identical mass of 30 mm projectiles would result in a kill probability 1.5 times greater than with 23 mm projectiles. An increase in the maximum engagement altitude from 2,000 to 4,000 m and increased effectiveness when engaging lightly armoured ground targets were also cited.[5]

The initial requirements set for the system were to achieve twice the performance in terms of range, altitude and combat effectiveness of the ZSU-23-4, additionally the system should have a reaction time no greater than 10 seconds.[3] Due to the similarities in the fire control of artillery and missiles, it was decided that the Tunguska would be a combined gun and missile system.[3] A combined system is more effective than the ZSU-23-4, engaging targets at long-range with missiles, and shorter range targets with guns.

In addition to KBP as the primary contractor, other members of the Soviet military-industrial complex were involved in the project; the chassis was developed at the Minsk tractor factory, the radio equipment at the Ulyanovsk Mechanical Factory, central computer at NIEMI ("Antey"), guidance and navigational systems by VNII "Signal", and optics were developed by the Leningrad Optical Mechanical Association (LOMO).[6]

However, development was slowed between 1975 and 1977 after the introduction of the 9K33 Osa missile system, which seemed to fill the same requirement but with greater missile performance. After some considerable debate, it was felt that a purely missile-based system would not be as effective at dealing with very low flying attack helicopters attacking at short range with no warning as had been proven so successful in the 1973 Arab-Israeli War. Since the reaction time of a gun system is around 8–10 seconds, compared to approximately 30 seconds for a missile-based system, development was restarted.[5]

The initial designs were completed in 1973, with pilot production completed in 1976 at the Ulyanovsk Mechanical Factory.[3] System testing and trials were conducted between September 1980 and December 1981 on the Donguzskiy range.[3] It was officially accepted into service on 8 September 1982 and the initial version, which was designated 2K22/2S6, had four missiles in the ready to fire position (two on each side). The Tunguska entered into limited service from 1984, when the first batteries were delivered to the army.[3]

After a limited production run of the original 2K22, an improved version designated 2K22M/2S6M entered service in 1990.[3] The 2K22M featured several improvements with eight ready-to-fire missiles (four on each side) as well as modifications to the fire control programs, missiles and the general reliability of the system.

Tunguska underwent further improvement when, in 2003, the Russian armed forces accepted the Tunguska-M1 or 2K22M1 into service.[3] The M1 introduced the new 9M311-M1 missile, which made a number of changes allowing the 2K22M1 to engage small targets like cruise missiles by replacing the eight-beam laser proximity fuze with a radio fuse. An additional modification afforded greater resistance to infrared countermeasures by replacing the missile tracking flare with a pulsed IR beacon. Other improvements included an increased missile range from 8 to 10 km, improved optical tracking and accuracy, improved fire control co-ordination between components of a battery and the command post. Overall, the Tunguska-M1 has a combat efficiency 1.3–1.5 times greater than the Tunguska-M.[7]

The Tunguska family was until recently a unique and highly competitive weapons system, though in 2007 the Pantsir gun and missile system entered production at KBP[8]—a descendant of the Tunguska, the Pantsir system offers even greater performance than its predecessor.

The GRAU index lists the "Tunguska" system as 2K22,[3] although the army designation 9K22 is also a valid reference.[9] A complete system or battery consists of six 2S6 combat vehicles armed with the 9M311 "Treugol'nik" (triangle) surface-to-air missile and two 2A38 30 mm cannons. These are accompanied by up to three 2F77 transloader trucks. The 2K22 is also associated with a variety of support facilities including the 2F55, 1R10 and 2V110 repair and maintenance vehicles, the MTO-AGZ workshop and the 9V921 test vehicle and others.[10] These facilities provide maintenance for the 2K22 battery in the field as well as scheduled overhauls. Each system can attack six targets simultaneously (1 for each machine 2S6) limited in height of 3.5 km and a height of from -9 (gun)/-10(rocket) to +87 degrees.[11][12] Minimum height of defeat 0 meters for guns and rockets to 15 meters (original 2K22).[11]

The 2S6 combat vehicle uses the GM-352 and later GM-352M chassis developed and produced by the Minsk Tractor Plant (MTZ) which has six road wheels with hydropneumatic suspension on each side, a drive sprocket at the rear and three return rollers. An NBC system is also integrated into the chassis, which is protected -as the entire vehicle- from small arms fire (7,62)[11] and shell splinters by the armor, as well as an automatic fire suppression system,[13] an automatic gear change and diagnostic capability are available with latest Tunguska-M1 which uses the new GM-5975 chassis developed and produced by MMZ. GM-5975.25 has a cruising range of 500 km and a maximum speed of 65 km per hour. It can function at a relative humidity of 98 per cent at 35 degrees C, in ambient temperatures of -50 degrees C to 50 degrees C and up to an altitude of 3,000 m. It has an ability of climb up to 35 degrees, can cross slopes of 25 degrees, 2 m width ditch, 1 m depth ford.[14][15] Overall, the layout is similar to the previous ZSU-23-4 with a large central 360-degree rotating turret (designated the 2A40) containing the armament, sensors and three of the crew: the commander, gunner and radar operator. The driver sits in the front left of the hull, with a gas turbine APU to his right and the multi-fuel diesel engine in the rear of the hull.

An electromechanically scanned parabolic E-band (10 kW power) target acquisition radar is mounted on the rear top of the turret that when combined with the turret front mounted J-band (150 kW power) monopulse tracking radar forms the 1RL144 (NATO:Hot Shot) radar system, which can detect and track targets flying high as 3,500 m. Alongside the 1A26 digital computer and the 1G30 angle measurement system form the 1A27 radar complex. Tunguska-M has the 1RL144M radar with detection range 18 km and tracking range 16 km-near of the original system's. The mechanically scanned target acquisition radar for the Tunguska-M1 offers a 360-degree field of view, a detection range of around 18 km and can detect targets flying as low as 15 m, the target acquisition radar can be stowed when in transit. Its tracking radar has a range of 16 km. A C/D-band IFF system is also fitted and designated 1RL138.[16] The radar system is highly protected against various types of interference, and can work if there are mountains on the horizon, regardless of the background. The radar can sees due to the rotation the helicopter of screws.[17] The system is able to fire on the move using 30 mm cannons, although it must be stationary to fire missiles. The maximum target speed can be up to 500 m/s; reaction time 6–8 seconds.[18] Each 2S6 has all facilities for independent warfare.[12]

Standard equipment of the 2S6 and 2S6M includes a computerized fire control system, heating, ventilation, NBC system, an automatic fire detection and suppression system, navigational equipment, night vision aids, 1V116 intercom, external communications system with an R-173 receiver -modernized in the 2S6M for better communication with the command post- and monitoring equipment.[19] The vehicle also has protection against the effects of nuclear, biological and chemical weapons.[12]

A battery of six Tunguska can automatically receive fire control information via an encrypted radio link, this allows targets to be distributed between individual units from a Ranzhir or PPRU battery command post, which can receive target information from either AWACS or early warning radar or in the case of the PPRU its own radar equipment.[7]

The dual 2A38 30 mm cannons (as well as the later 2A38M) were designed by the KBP Instrument Design Bureau and manufactured by the Tulamashzavod Joint Stock Company. The cannons are fired alternatively with a combined rate of fire of between 3,900 and 5,000 rounds per minute (1,950 to 2,500 rpm for each gun), and have a muzzle velocity of 960 m/s.[23] Bursts of between 83 and 250 rounds are fired as determined by the target type, with an engagement range between 0.2 and 4.0 km and to an altitude of about 3 km. HE-T and HE-I shells are used and fitted with a A-670 time and impact fuze which includes an arming delay and self destruct mechanism.[10] Sources vary on elevation capabilities (one estimate gives +85 to −9 degrees, while another +87 to −10 degrees), though this range allows the system to engage ground as well as aerial targets. The 2K22 can fire its cannons in two primary modes of operation, radar and optical. In radar mode, the target tracking is fully automatic, with the guns aimed using data from the radar. In optical mode, the gunner tracks the target through the 1A29 stabilized sight, with the radar providing range data.[16] The 2K22 is reported to have a kill probability of 0.8 with cannon. The height of defeat for guns is 0–2000 meters—for missiles 10–3500 meters.[24]

The system is able to fire on the move using 30 mm cannons, although it must be stationary to fire missiles, the maximum target speed can be up to 500 m/s, reaction time 6–8 seconds.[18] Each 2S6 has all facilities for independent warfare.[25]

Illustration of the 9M311

Guidance is performed by the target tracking radar, it constantly relays target range, elevation and bearing to the fire-control computer, and on the basis of this data the computer generates the laying commands for the guns or the trajectory corrections for the missiles. A back-up tracking method can be used by the gunner, who uses the 8× magnification (8 degree field of view) 1A29 stabilized sight of the Tunguska to track the target in elevation and azimuth, the altitude or range of the target being set manually.[16] The gunner is initially cued towards the target by the system's search radar. Once the missile is steered to within 5 m of the target, an active laser or radio fuse (9M311-M1) is triggered. A contact fuse is also fitted. The warhead weighs about 9 kg, and is a continuous-rod system, consisting of 600 mm long, 6 to 9 mm diameter rods with a flower-like cross section. The cross section ensures the rods break into fragments weighing 2–3 grams. The rods form a complete ring about 5 m from the missile. Outside the rods is a fragmentation layer of steel cubes weighing 2–3 grams.[5] The 9K22 is reported to have a kill probability of 0.6 with missiles (9M311).[5][24] 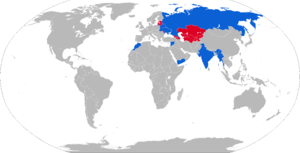