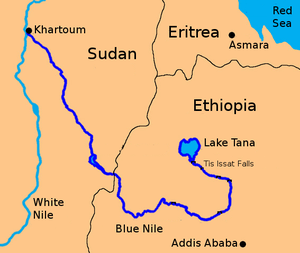 Map of the Blue Nile 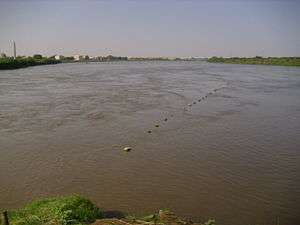 Confluence of Blue and White Nile near Khartoum 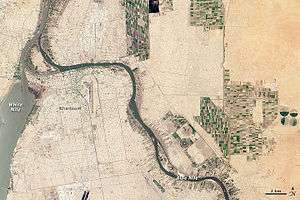 The Blue Nile (Amharic: ዓባይ?; transliterated: ʿAbbay but pronounced Abbai, Arabic: النيل الأزرق‎‎ an-Nīl al-Azraq) is a river originating at Lake Tana in Ethiopia. With the White Nile, the river becomes one of the two major tributaries of the Nile. The upper course of the river is called the Abbay in Ethiopia, where many regard it as holy. Some Ethiopians have long identified the Blue Nile as the River Gihon mentioned as flowing out of the Garden of Eden in Genesis 2[1] and "encircling the entire land of Cush".

The Blue Nile is so-called because floods during the summer monsoon erode a vast amount of fertile soil from the Ethiopian Highlands and carry it downstream as silt, turning the water dark brown or almost black.[2] In the local Sudanese language, the word for black is also used for the colour blue.

The distance of the river from its source to its confluence has been variously reported as being between 1,460 kilometres (910 mi) and 1,600 kilometres (990 mi). This uncertainty over the length might partially result from the fact that the river flows through a series of virtually impenetrable gorges cut in the Ethiopian Highlands to a depth of some 1,500 metres (4,900 ft)—a depth comparable to that of the Grand Canyon of the Colorado River in the United States.

According to materials published by the Central Statistical Agency, the Blue Nile has a total length of 1,450 kilometres (900 mi), of which 800 kilometres (500 mi) are inside Ethiopia.[3] The Blue Nile flows generally south from Lake Tana and then west across Ethiopia and northwest into Sudan. Within 30 km (19 mi) of its source at Lake Tana, the river enters a canyon about 400 km (250 mi) long. This gorge is a tremendous obstacle for travel and communication from the north half of Ethiopia to the southern half. The power of the Blue Nile may best be appreciated at the Blue Nile Falls, which are 45 metres (148 ft) high, located about 40 kilometres (25 mi) downstream of Lake Tana.

Although there are several feeder streams that flow into Lake Tana, the sacred source of the river is generally considered to be a small spring at Gish Abay, situated at an altitude of approximately 2,744 metres (9,003 ft). This stream, known as the Lesser Abay River, flows north into Lake Tana. Other affluents of this lake include, in clockwise order from Gorgora, the Magech River, the Northern Gumara, the Reb River, the southern Gumara River, and the Kilte.[4] Lake Tana's outflow then flows some 30 kilometres (19 mi) before plunging over the Blue Nile Falls. The river then loops across northwest Ethiopia through a series of deep valleys and canyons into Sudan, by which point it is only known as the Blue Nile.

After flowing past Er Roseires inside Sudan, and receiving the Dinder on its right bank at Dinder, the Blue Nile joins the White Nile at Khartoum and, as the Nile, flows through Egypt to the Mediterranean Sea at Alexandria.

The flow of the Blue Nile reaches maximum volume in the rainy season (from June to September), when it supplies about two thirds of the water of the Nile proper. The Blue Nile was a major source of the flooding of the Nile that contributed to the fertility of the Nile Valley and the consequent rise of Ancient Egypt and Egyptian mythology. With the completion in 1970 of the Aswan Dam in Egypt, the Nile floods ended.

The Blue Nile is vital to the livelihood of Egypt. The Blue Nile, the most significant tributary of the Nile, contributes more than half of the Nile's streamflow.[5] Though shorter than the White Nile, 59% of the water that reaches Egypt originates from the Blue Nile branch of the great river. The river is also an important resource for Sudan, where the Roseires Dam and Sennar Dams produce 80% of the country's power. These dams also help irrigate the Gezira Scheme, which is most famous for its high quality cotton. The region also produces wheat and animal feed crops.

In November 2012, Ethiopia began a six-year project for the construction of the Grand Ethiopian Renaissance Dam, a 6000-megawatt hydroelectric dam on the river. The dam is expected to be a boost for the Ethiopian economy. Sudan and Egypt, meanwhile, voiced their concern over a potential reduction in water available to them.[6] 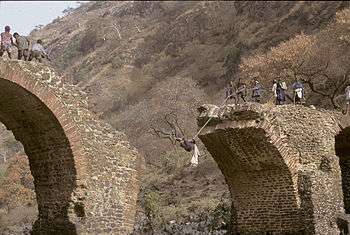 The first European to have seen the Blue Nile in Ethiopia and the river's source was Pedro Páez, a Spanish Jesuit who reached the river's source 21 April 1613.[7] Nevertheless, the Portuguese João Bermudes, the self-described "Patriarch of Ethiopia", provided the first description of the Blue Nile Falls in his memoirs published in 1565, and a number of Europeans who lived in Ethiopia in the late 15th century such as Pêro da Covilhã could have seen the river long before Páez, but not reached its places of source.

The source of the Blue Nile was also reached in 1629 by the Portuguese Jesuit missionary Jerónimo Lobo and in 1770 by James Bruce.

Although a number of European explorers contemplated tracing the course of the Blue Nile from its confluence with the White Nile to Lake Tana, its gorge, which begins a few kilometres inside the Ethiopian border, has discouraged all attempts since Frédéric Cailliaud's attempt in 1821. The first serious attempt by a non-local to explore this reach of the river was undertaken by the American W.W. Macmillan in 1902, assisted by the Norwegian explorer B.H. Jenssen; Jenssen would proceed upriver from Khartoum while Macmillan sailed downstream from Lake Tana. However, Jenssen's boats were blocked by the rapids at Famaka short of the Sudan-Ethiopian border, and Macmillan's boats were wrecked shortly after they had been launched. Macmillan encouraged Jenssen to try to sail upstream from Khartoum again in 1905, but he was forced to stop 500 kilometres (300 mi) short of Lake Tana.[8] R.E. Cheesman, who records his surprise on arriving in Ethiopia at finding that the upper waters of "one of the most famous of the rivers of the world, and one whose name was well known to the ancients" was in his lifetime "marked on the map by dotted lines", managed to map the upper course of the Blue Nile between 1925–1933. He did this not by following the river along its banks and through its impassable canyon, but following it from the highlands above, travelling some 8,000 km (5,000 mi) by mule in the adjacent country.[9] 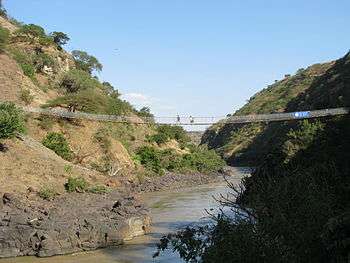 New Blue Nile River suspended bridge completed in 2009. It is the only pedestrian cable bridge over the Blue Nile in Ethiopia.

In 1968, at the request of Haile Selassie of Ethiopia, a team of 60 British and Ethiopian servicemen and scientists made the first descent of the Blue Nile from Lake Tana to a point near the Sudan border led by the explorer John Blashford-Snell.[10] The team used specially-built Avon Inflatables and modified Royal Engineers assault boats to navigate the formidable rapids. This expedition made many important scientific discoveries..

In 1999, writer Virginia Morell[11] and photographer Nevada Wier made the journey by raft from Lake Tana to the Sudan, afterwards publishing a documentary about their journey.[12] In 2000, American and National Geographic reader, Kenneth Frantz, saw a photo taken by Nevada Wier for National Geographic which would lead him to found the charity Bridges to Prosperity. This photo showed a bridge broken during World War II, with 10 men on either side of the broken span pulling each other across the dangerous gap by rope. This historic bridge was built by Emperor Fasilides in approximately 1660 with Roman bridge technology brought to Ethiopia by Portuguese soldiers during the battle with the Muslim invaders in 1507.[13] In both 2001 and 2009, Bridges to Prosperity volunteers travelled from the United States to repair the broken bridge across the Blue Nile river and later build a new suspension bridge not susceptible to flood.[14]

On April 28, 2004, geologist Pasquale Scaturro and his partner, kayaker and documentary filmmaker Gordon Brown, became the first known people to navigate the Blue Nile. Though their expedition included a number of others, Brown and Scaturro were the only ones to remain on the expedition for the entire journey. They chronicled their adventure with an IMAX camera and two handheld video cams, sharing their story in the IMAX film Mystery of the Nile and in a book of the same title.[15] The team was forced to use outboard motors for most of their journey, and it was not until January 29, 2005, when Canadian Les Jickling and New Zealander Mark Tanner reached the Mediterranean Sea, that the river had been paddled for the first time in recorded history with human power from source to sea.