Achondroplasia is a common cause of dwarfism. It occurs as a sporadic mutation in approximately 80% of cases (associated with advanced paternal age) or it may be inherited as an autosomal dominant genetic disorder.

People with achondroplasia have short stature, with an average adult height of 131 centimeters (52 inches) for males and 123 centimeters (48 inches) for females. Achondroplastic adults are known to be as short as 62.8 cm (24.7 in). If both parents of a child have achondroplasia, and both parents pass on the mutant gene, then it is very unlikely that the homozygous child will live past a few months of its life. The prevalence is approximately 1 in 25,000.[3] 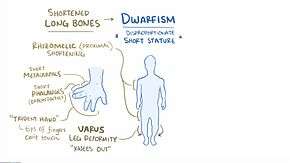 Achondroplasia is caused by a mutation in fibroblast growth factor receptor 3 (FGFR3). In normal development FGFR3 has a negative regulatory effect on bone growth. In achondroplasia, the mutated form of the receptor is constitutively active and this leads to severely shortened bones. The effect is genetically dominant, with one mutant copy of the FGFR3 gene being sufficient to cause achondroplasia, while two copies of the mutant gene are invariably fatal (recessive lethal) before or shortly after birth (known as a lethal allele). A person with achondroplasia thus has a 50% chance of passing dwarfism to each of their offspring. People with achondroplasia can be born to parents that do not have the condition due to spontaneous mutation.[4]

There are two other syndromes with a genetic basis similar to achondroplasia: hypochondroplasia and thanatophoric dysplasia.

Achondroplasia can be detected before birth by the use of prenatal ultrasound. A DNA test can be performed before birth to detect homozygosity, wherein two copies of the mutant gene are inherited, a lethal condition leading to stillbirths. Clinical features include megalocephaly, short limbs, prominent forehead, thoracolumbar kyphosis and mid-facial hypoplasia.[6] Complications like dental malocclusion, hydrocephalus and repeated otitis media can be observed.[6] The risk of death in infancy is increased due to the likelihood of compression of the spinal cord with or without upper airway obstruction.

A skeletal survey is useful to confirm the diagnosis of achondroplasia. The skull is large, with a narrow foramen magnum, and relatively small skull base. The vertebral bodies are short and flattened with relatively large intervertebral disk height, and there is congenitally narrowed spinal canal. The iliac wings are small and squared,[7] with a narrow sciatic notch and horizontal acetabular roof. The tubular bones are short and thick with metaphyseal cupping and flaring and irregular growth plates. Fibular overgrowth is present. The hand is broad with short metacarpals and phalanges, and a trident configuration. The ribs are short with cupped anterior ends. If the radiographic features are not classic, a search for a different diagnosis should be entertained. Because of the extremely deformed bone structure, people with achondroplasia are often "double jointed".

The diagnosis can be made by fetal ultrasound by progressive discordance between the femur length and biparietal diameter by age. The trident hand configuration can be seen if the fingers are fully extended.

Another distinct characteristic of the syndrome is thoracolumbar gibbus in infancy.

Usually, the best results appear within the first and second year of therapy.[9] After the second year of growth hormone therapy, beneficial bone growth decreases.[10] Therefore, GH therapy is not a satisfactory long term treatment.[9]

Gene based therapy may possibly serve as a future treatment option. BioMarin Pharmaceutical Inc. announced in 2012 the initiation of a Phase 1 study in healthy volunteers for vosoritide (BMN-111), an analog of C-type Natriuretic Peptide (CNP), for the treatment of achondroplasia. In June 2015, BioMarin announced positive results of their Phase 2 study, stating that 10 children experienced a mean increase of 50% in their annualized growth velocity.[11]

Achondroplasia is one of 19 congenital conditions with similar presentations, such as osteogenesis imperfecta, multiple epiphyseal dysplasia tarda, achondrogenesis, osteopetrosis, and thanatophoric dysplasia. This makes estimates of prevalence difficult, with changing and subjective diagnostic criteria over time. One detailed and long-running study in the Netherlands found that the prevalence determined at birth was only 1.3 per 100,000 live births.[12] Another study at the same time found a rate of 1 per 10,000.[12]

Based on their disproportionate dwarfism, some dog breeds traditionally have been classified as "achondroplastic." This is the case for the dachshund, basset hound, corgi and bulldog breeds.[13][14][15] Data from whole genome association studies in short-limbed dogs reveal a strong association of this trait with a retro-gene coding for fibroblast growth factor 4 (FGF4).[16] Therefore, it seems unlikely that dogs and humans are achondroplastic for the same reasons. However, histological studies in some achondroplastic dog breeds have shown altered cell patterns in cartilage that are very similar to those observed in humans exhibiting achondroplasia.[17]

A similar form of achondroplasia was found in a litter of piglets from a phenotypically normal Danish sow. The dwarfism was inherited dominant in the offspring from this litter. The piglets were born phenotypically normal but became more and more symptomatic as they reached maturity.[18] This involved a mutation of the protein Collagen, type X, alpha 1, encoded by the COL10A1 gene. In humans a similar mutation (G595E) has been associated with Schmid metaphyseal chondrodysplasia (SMCD), a relatively mild skeletal disorder that is also associated with dwarfism.

The now-extinct Ancon sheep was created by humans through the selective breeding of common domestic sheep with achondroplasia. The average-sized torso combined with the relatively smaller legs produced by achondroplasia was valued for making affected sheep less likely to escape without affecting the amount of wool or meat each sheep produced.[19]