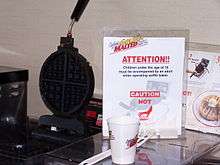 An age restriction on operating a waffle baker independently

Adultism has been defined as "the power adults have over children".[1] More narrowly, 'adultism is prejudice and accompanying systematic discrimination against young people'.[2] On a more philosophical basis, the term has also been defined as "bias towards adults... and the social addiction to adults, including their ideas, activities, and attitudes."[3]

The word adultism was used by Patterson Du Bois in 1903,[4] and appears in French psychology literature in 1929, describing the influence of adults over children. It was seen as a condition wherein a child possessed adult-like "physique and spirit", and was exemplified by,

A boy of 12 and a girl of 13 who had the spirit and personality of adults.... They were placed in institutions because of stealing and prostitution. These forms of precocity lead the individual into difficulties and should be recognized early in the development of the individual.[5]

This definition was superseded by a late 1970s journal article proposing that adultism is the abuse of the power that adults have over children. The author identified examples of adultism not only in parents but in teachers, psychotherapists, the clergy, police, judges, and juries.[1]

Adultism is defined as the "behaviors and attitudes based on the assumptions that adults are better than young people, and entitled to act upon young people without agreement".[6][7] It is also seen as, "an addiction to the attitudes, ideas, beliefs, and actions of adults."[8] Adultism is popularly used to describe any discrimination against young people and is distinguished from ageism, which is simply prejudice on the grounds of age; not specifically against youth. Adultism is ostensibly caused by fear of children and youth.[9] It has been suggested that 'adultism, which is associated with a view of the self that trades on rejecting and excluding child-subjectivity, has always been present in Western culture'.[10]

Fletcher[11] suggests that adultism has three main expressions throughout society:

A study by the Crisis Prevention Institute of the prevalence of adultism found an increasing number of local youth-serving organizations addressing the issue.[12] For instance, a local program in Oakland, California, describes the impact of adultism, which "hinders the development of youth, in particular, their self-esteem and self-worth, ability to form positive relationships with caring adults, or even see adults as allies", on their website.[13]

Adultism is used to describe the oppression of children and young people by adults, which is seen as having the same power dimension in the lives of young people as racism and sexism.[14] It is treated as a generalization of paternalism, allowing for the broad force of adulthood beyond males, and may be witnessed in the infantalization of children and youth. Pedophobia (the fear of children) and ephebiphobia (the fear of youth) have been proposed as the antecedents to adultism.[15] Tokophobia, the fear of childbirth, may also be a precursor; gerontophobia, or its antonym, gerontocracy, may be extensions of adultism.

Similar terms such as adult privilege, adultarchy, and adultcentrism have been proposed as alternatives which are more morphologically parallel.[16] Some activists alternatively call adultism "youthism," or "childism" equating it to sexism and heterosexism.[17] The opposite of adultism is jeunism, which is defined as the preference of young people and adolescents over adults.

In his seminal 1978 article, Flasher explained that adultism is born of the belief that children are inferior, professing that adultism can be manifested as excessive nurturing, possessiveness, or over-restrictiveness, all of which are consciously or unconsciously geared toward excessive control of a child.[21] It has been associated with psychological projection and splitting, a process whereby 'the one with the power attributes his or her unconscious, unresolved sexual and aggressive material' to the child - 'both the dark and the light side...hence the divine child/deficit child'[22] split.

Recently, theologians Heather Eaton and Matthew Fox proposed, "Adultism derives from adults repressing the inner child."[23] John Holt stated, "An understanding of adultism might begin to explain what I mean when I say that much of what is known as children's art is an adult invention."[24] That perspective is seemingly supported by Maya Angelou, who remarked:

A 2006/2007 survey conducted by the Children's Rights Alliance for England and the National Children's Bureau asked 4,060 children and young people whether they have ever been treated unfairly based on various criteria (race, age, sex, sexual orientation, etc.). A total of 43% of British youth surveyed reported experiencing discrimination based on their age, substantially more than other categories of discrimination like sex (27%), race (11%), or sexual orientation (6%).[26]

In a publication published by the W. K. Kellogg Foundation, University of Michigan professor Barry Checkoway asserts that internalized adultism causes youth to "question their own legitimacy, doubt their ability to make a difference" and perpetuate a "culture of silence" among young people.[29]

"Adultism convinces us as children that children don't really count," reports an investigative study, and it "becomes extremely important to us [children] to have the approval of adults and be 'in good' with them, even if it means betraying our fellow children. This aspect of internalized adultism leads to such phenomena as tattling on our siblings or being the 'teacher's pet,' to name just two examples."[30]

Other examples of internalized adultism include many forms of violence imposed upon children and youth by adults who are reliving the violence they faced as young people, such as corporal punishment, sexual abuse, verbal abuse, and community incidents that include store policies prohibiting youth from visiting shops without adults, and police, teachers, or parents chasing young people from areas without just cause.[6]

Institutional adultism may be apparent in any instance of systemic bias, where formalized limitations or demands are placed on people simply because of their young age. Policies, laws, rules, organizational structures, and systematic procedures each serve as mechanisms to leverage, perpetuate, and instill adultism throughout society. These limitations are often reinforced through physical force, coercion or police actions and are often seen as double-standards.[31] This treatment is increasingly seen as a form of gerontocracy.[32][33]

Institutions perpetuating adultism may include the fiduciary, legal, educational, communal, religious, and governmental sectors of a community. Social science literature has identified adultism as "within the context of the social inequality and the oppression of children, where children are denied human rights and are disproportionately victims of maltreatment and exploitation."[34]

Cultural adultism is a much more ambiguous, yet much more prevalent, form of discrimination or intolerance towards youth. Any restriction or exploitation of people because of their young age, as opposed to their ability, comprehension, or capacity, may be said to be adultist. These restrictions are often attributed to euphemisms afforded to adults on the basis of age alone, such as "better judgment" or "the wisdom of age". A parenting magazine editor comments, "Most of the time people talk differently to kids than to adults, and often they act differently, too."[38] This summarizes cultural adultism. For examples see:

Discrimination against age is increasingly recognized as a form of bigotry in social and cultural settings around the world. An increasing number of social institutions are acknowledging the positions of children and teenagers as an oppressed minority group.[40] Many youth are rallying against the adultist myths spread through mass media from the 1970s through the 1990s. [41][42]

Research compiled from two sources (a Cornell University nationwide study, and a Harvard University study on youth) has shown that social stratification between age groups causes stereotyping and generalization; for instance, the media-perpetuated myth that all adolescents are immature, violent and rebellious.[43] Opponents of adultism contend that this has led to growing number of youth, academics, researchers, and other adults rallying against adultism and ageism, such as organizing education programs, protesting statements, and creating organizations devoted to publicizing the concept and addressing it.[44]

Simultaneously, research shows that young people who struggle against adultism within community organizations have a high rate of impact upon said agencies, as well as their peers, the adults who work with them, and the larger community to which the organization belongs[45]

There may be many negative effects of adultism, including ephebiphobia and a growing generation gap. A reactive social response to adultism takes the form of the children's rights movement, led by young people who strike against being exploited for their labor. Numerous popular outlets are employed to strike out against adultism, particularly music and movies. Additionally, many youth-led social change efforts have inherently responded to adultism, particularly those associated with youth activism and student activism, each of which in their own respects have struggled with the effects of institutionalized and cultural adultism.[44]

A growing number of governmental, academic, and educational institutions around the globe have created policy, conducted studies, and created publications that respond to many of the insinuations and implications of adultism. Much of popular researcher Margaret Mead's work can be said to be a response to adultism.[46] Current researchers whose work analyzes the effects of adultism include sociologist Mike Males[47] and critical theorist Henry Giroux. The topic has recently been addressed in liberation psychology literature, as well.[48]

Any inanimate or animate exhibition of adultism is said to be "adultist". This may include behaviors, policies, practices, institutions, or individuals.

Educator John Holt proposed that teaching adults about adultism is a vital step to addressing the effects of adultism,[49] and at least one organization[50] and one curriculum[51] do just that. Several educators have created curricula that seek to teach youth about adultism, as well.[52] Currently, organizations responding to the negative effects of adultism include the United Nations, which has conducted a great deal of research[53] in addition to recognizing the need to counter adultism through policy and programs. The CRC has particular Articles (5 and 12) which are specifically committed to combating adultism. The international organization Human Rights Watch has done the same.[54]

Common practice accepts the engagement of youth voice and the formation of youth-adult partnerships as essential steps to resisting adultism.[55]

Some ways to challenge adultism also include youth-led programming and participating in youth-led organizations. These are both ways of children stepping up and taking action to call out the bias towards adults. Youth-led programming allows the voices of the youth to be heard and taken into consideration.[56] Taking control of their autonomy can help children take control of their sexuality, as well. Moving away from an adultist framework leads to moving away from the idea that children aren't capable of handling information about sex and their own sexuality. Accepting that children are ready to learn about themselves will decrease the amount of misinformation spread to them by their peers and allow them to receive accurate information from individuals educated on the topic.[57]

In its most extreme form, the target of the advocates of addressing adultism is 'the more or less conscious, uncontrolled, and covert exercise of power over the child by the adult...this wielding of power by adults'[58] per se. Such an attack on any adult power may be fuelled by what has been called 'the homunculus idea about children...to many grown-ups a child is a Small Adult. They do not understand that a child carries different kinds of problems than an adult does'.[59]

In its milder form, 'adultism is about the misuse of power and does not refer to the normal responsibilities of adults in relation to children'.[60] Therefore, 'addressing adultism is not about reversing the power structure...[or] completely eradicating it': rather, 'shedding adultism involves a negotiation of decisions'.[61]