Akita Station is served by the following lines.

The central ticket barrier entrance and concourse in April 2012 2008

Akita Station is an elevated station, consisting of four island platforms serving eight tracks for regular trains, and two bay platforms for the Akita Shinkansen. The station has a "Midori no Madoguchi" staffed ticket office and a View Plaza travel agency.[1] 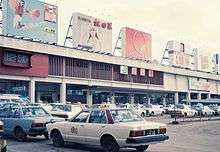 The station in December 1987

Akita Station opened on 21 October 1902.[2] The station was absorbed into the JR East network upon the privatization of JNR on 1 April 1987. A new station building was completed in 1997.

In fiscal 2012, the station was used by an average of 11,143 passengers daily (boarding passengers only).[3] The passenger figures for previous years are as shown below.