East Japan Railway Company (東日本旅客鉄道株式会社, Higashi-Nihon Ryokaku Tetsudo Kabushiki-gaisha) is a major passenger railway company in Japan and one of the seven Japan Railways Group companies. The company name is officially abbreviated as JR-EAST[9] or JR East in English, and as JR Higashi-Nihon (JR東日本, Jeiāru Higashi-Nihon) in Japanese. The company's headquarters are in Yoyogi, Shibuya, Tokyo.[2]

Commuter trains on the Chūō Line in Tokyo 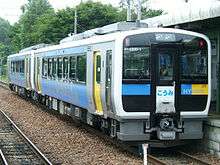 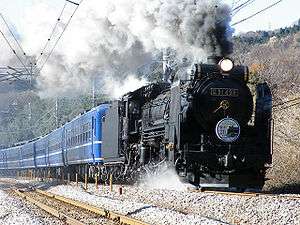 Special steam train on the Jōetsu Line in Gunma Prefecture

Ticket machines in a station in Tokyo 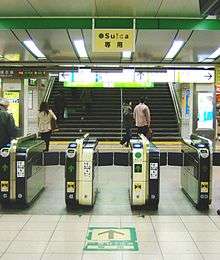 JR East was incorporated on 1 April 1987 after being spun off from the government-run Japanese National Railways (JNR). The spin-off was nominally "privatization", as the company was actually a wholly owned subsidiary of the government-owned JNR Settlement Corporation for several years, and was not completely sold to the public until 2002.

Following the breakup, JR East ran the operations on former JNR lines in the Greater Tokyo Area, the Tohoku region, and surrounding areas.

JR East operates all of the Shinkansen, high-speed rail lines, north of Tokyo.

The Tokyo–Osaka Tokaido Shinkansen is owned and operated by the Central Japan Railway Company (JR Central), although it stops at several JR East stations.

These lines have sections inside the Tokyo Suburban Area (東京近郊区間) designated by JR East. This does not necessarily mean that the lines are fully inside the Greater Tokyo Area.

Other lines in Kanto

Below is the full list of limited express (including Shinkansen) and express train services operated on JR East lines as of 2011.

During fiscal 2014, the busiest stations in the JR East network by average daily passenger count were:[10] 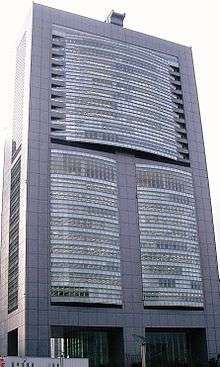 JR East aims to reduce its carbon emissions by half, as measured over the period 1990-2030. This would be achieved by increasing the efficiency of trains and company-owned thermal power stations and by developing hybrid trains.[12]

The Tokyo Metropolitan Police Department has stated that JR East's official union is a front for an organized crime syndicate called the Japan Revolutionary Communist League (Revolutionary Marxist Faction). An investigation of this is ongoing.[13]

The East Japan Railway Culture Foundation is a non-profit organization established by JR East for the purpose of developing a "richer railway culture".[14] The Railway Museum in Saitama is operated by the foundation.

EJRC have bidded for the London Midland franchise in the United Kingdom. Winners will be announced on June 2017 and will start operating on October 2017. [15]