Sweety Shetty (born 7 November 1981), better known by her stage name Anushka Shetty, is an Indian actress and model who works predominantly in Telugu and Tamil films.

She made her acting debut through the 2005 Telugu film Super. She went on to star in a number of Telugu films such as Vikramarkudu (2006), Arundhati (2009), Vedam (2010), Rudramadevi (2015) and Baahubali: The Beginning (2015). After starring in a series of high-budget productions, she established herself as one of the leading actresses in Telugu cinema.[4] She received critical acclaim for her portrayal of the title character in Arundhati (2009),[5] as Saroja in Vedam (2010),[6] and as Queen Rudramadevi which fetched her three Filmfare, one Nandi and three CineMAA Awards. In the 2010s, Anushka also achieved success in Tamil cinema with the action films Singam (2010),[4] its sequel Singam II (2013) and Yennai Arindhaal (2015). All three of them were big commercial successes, while her performances in Vaanam (2011), Deiva Thirumagal (2011) and Inji Iduppazhagi (2015) won her critical praise.

Born in Mangalore, Karnataka, Anushka is an ethnic Tuluva hailing from the landed Bellipady Uramalu Guthu family.[8] Her parents are Prafulla and A.N. Vittal Shetty.[8] She has two brothers Gunaranjan Shetty and Sai Ramesh Shetty who is a cosmetic surgeon.[8] Anushka did her schooling in Bangalore and her Bachelor of Computer Applications at the Mount Carmel College, Bangalore. She was also a yoga instructor, trained under Bharat Thakur.[9]

Anushka made her acting debut in Puri Jagannath's 2005 Telugu film Super, where she featured alongside Akkineni Nagarjuna and Ayesha Takia. IndiaGlitz said "The two girls, Ayesha and Anushka, are cool and chic. Their angles and curves provide all the glamour and keep you engrossed. What about their acting? Well, they are in this film for it."[10] and Sify stated, "The sexy girls Ayesha and Anushka show off their bodies."[11] The same year, she acted in another film Maha Nandi, opposite Srihari and Sumanth. IndiaGlitz said, "Anushka looks comely ---and that is what she seems to be in for." but added, "The script has been stitched and the seams look frayed."[12] Sify stated that it "starts promisingly with a racy first half but goes awry and the tempo slackens post interval." and added, "Anushka looks ravishing thanks to Vasu’s camera which is a major plus for the film."[13]

In 2006, she had four releases, the first being S. S. Rajamouli's Vikramarkudu, where she was paired with Ravi Teja. The film went on to become very successful and got her much recognition, making her very popular in Telangana and Andhra Pradesh.[14][15] Kishore of Nowrunning.com said "The high points of the movie are the flawless acting of Raviteja and the lusciousness of Anushka. Raviteja has got all the ingredients that an actor should have and Anushka has all the assets to that a woman ought to have."[16] and Sify said that Anushka "is definitely a highlight."[17]

She next starred in the film Astram, a remake of the 1999 Hindi film Sarfarosh, following which she debuted in the Tamil film industry, acting in the Sundar C.-directed action flick Rendu, sharing screen space with R. Madhavan. Later that year, she made a special appearance alongside Mega star Chiranjeevi in A. R. Murugadoss' directorial debut in Telugu, Stalin.

Her first release in 2007 was Lakshyam which was a success in box office, after which she starred in Raghava Lawrence's Don opposite Nagarjuna again. The former, in particular, succeeded at the box office.[18] In 2008 she had appeared in six films. Okka Magaadu was the first release, in which she played one of three female leads. Nandamuri Balakrishna was the actor opposite her in Okka Magaadu. Her next releases Swagatam alongside Jagapati Babu and Bhumika Chawla and Baladur opposite Ravi Teja garnered poor reviews and box office returns.[19][20] She next appeared in the film Souryam with Gopichand which became a box office hit.

In 2009, Anushka first starred in the blockbuster hit, the fantasy film Arundhati. In this heroine-centric film, she essayed two roles for the first time.[4] It was a critical as well as commercial success. Critics heaped praise on Anushka for her performance. Idlebrain's Jeevi wrote that she was "simply amazing in two roles" and that she did "exceptionally well with subtle yet impact creating performance",[21] while Rediff claimed that she was "brilliant and breathtaking in parts", labelling Arundhati as "totally Anushka's film".[22] Sify noted that she was "at her best with great performance".[23] She went on to win the Nandi Special Jury Award[24] and the Filmfare Best Actress Award.[25] Her next film was Billa, a remake of the 2007 Tamil film of the same name. The film received mixed reviews, with Rediff stating "Anushka has a super-toned body and indulges in quite a bit of skin show" but had "nothing much to do",[26] while Sify stated "Anushka was there to show her oomph and glamour which she has done full justice".[27] Her final release in 2009 was her second Tamil feature film, the action masala film Vettaikkaran with actor Vijay and it received generally unfavourable reviews. Rediff said, "Anushka, fresh from her success with Arundhathi, has been relegated to pretty bimbette again and appears conveniently during the romantic numbers of which Oru Chinna Thamarai takes the cake."[28] and Sify said, "Anushka has nothing much to do and hence goes unnoticed."[29]

She had a string of releases in 2010. She portrayed a prostitute in Krish's critically acclaimed anthology film Vedam.[6] For her performance, she won the Filmfare Award for Best Actress, her second consecutive Filmfare Award.[30] Her next Telugu film, Panchakshari, was another heroine-centric film where she again performed double roles.[6] This was followed by the action comedy Khaleja, where she starred opposite Mahesh Babu for the first time in her career, Nagavalli, the Telugu remake of the Kannada film Aptharakshaka in which she portrayed the famous role of Chandramukhi and Ragada. She also made special appearances in the movies Kedi and Thakita Thakita. However all these 2010 releases failed to make an impact at the box office.[6] Her sole Tamil release of 2010, the police story Singam co-starring Suriya was a high commercial success. Sify claimed, "Anushka is there only for glamour and songs, but does a decent job".[31] while Pavithra Srinivasan of Rediff stated, "Anushka, thankfully, has more to do than just prance around in skimpy clothes (which she does very well). She romances dutifully, but her part picks up when both she and Suriya are in Chennai, tangling with villains."[32]

She reprised the role she played in Vedam in its Tamil remake, Vaanam (2011), which was also critically acclaimed. Malathi Rangarajan of The Hindu said, "Boldness and daring mark Anushka's role—the actor's eyes effectively convey joy, helplessness, agony and anger."[33] A critic from Sify wrote that "Anushka is outstanding as the commercial sex worker as she is able to bring out a life-like performance."[34] She next starred in A. L. Vijay's Deiva Thirumagal. The drama centers on the characters of Krishna (Vikram), an intellectually disabled father and his daughter Nila. The film became a critical and commercial success, fetching her laurels for her portrayal as Anuradha, an advocate.[35] Oneindia stated, "Anushka Shetty's character in the film had good scope for performance without being glamorous".[36] She received her first Filmfare nomination in the Tamil category, besides the Vijay Award for Favourite Heroine. 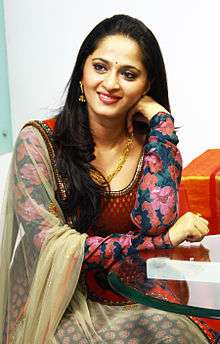 In 2012, Anushka recollabored with in A. L. Vijay and Vikram in the action drama Thaandavam. Malathi Rangarajan stated that "the romance between Vikram and Anushka is a beautiful feature of Thaandavam."[37] She later appeared alongside Akkineni Nagarjuna in the fantasy film Dhamarukam, which was her first Telugu release after two years. Karthik Pasupulate from The Times of India said that Anushka "has little to do as far as performance goes and does a good job of upping the glam quotient".[38] Radhika Rajamani of Rediff claimed, "Anushka looks sweet. Nag and Anushka have good onscreen chemistry".[39] Oneindia claimed, "Anushka Shetty has less scope for acting, but she impresses you in song sequences.[40]

Her first release in 2013 was Alex Pandian, an action-masala film, directed by Suraj, co-starring Karthi.[41] The film was a critical and commercial failure.[42] Her second release was Koratala Siva's Mirchi opposite Prabhas. Idlebrain claimed, "Anushka is adorable in a naughty village belle, the dubbing also seems great and the character Vennela is the best role among her recent role in movies".[43] Rediff wrote, "Anushka is bubbly and peps up the film considerably".[44] Sify wrote, "Anushka looks beautiful and livens up the moments and praised her chemistry with Prabhas".[45] She was next seen in Singam II, the sequel to Singam (2010), reprising her role from the first part. Sify said, "Anushka looks jaded, has nothing to do but sizzle with Suriya in two songs"[46] while The Times of India stated, "Anushka is forced to take a back seat even as she reprises her role of Kavya."[47]

Anushka next release was Selvaraghavan's fantasy adventure film Irandam Ulagam opposite Arya,[48] that saw her playing a dual role again, the third time in her career. Anushka played Ramya, a doctor and Varna, a high spirited, warrior-like character, in a parallel world. Rediff wrote, "Anushka not only shares equal screen space with Arya, but also plays quite a significant role. In fact, the story revolves around her and she has performed admirably".[49] Behindwoods wrote, "As the shy doctor Ramya and as the fierce warrior Varna, Anushka is simply at her best showcasing a wide range of emotions and stunts. It is her performance that stands as a pivot for the rest of the story to take shape".[50] Her latest release is the Tamil film Lingaa opposite Rajinikanth, released in December 2014.[51] She starred opposite Rajnikanth in Lingaa which opened to mixed reviews.[52][53][54][55][56][57][58]

In 2015, She starred opposite Ajith Kumar in Yennai Arindhaal which opened to positive reviews.[59][60] Her second release in 2015, is the first part of Baahubali directed by S. S. Rajamouli which became one of the top-grossing films in the Indian film industry.The Hindu noted that, Anushka Shetty is gutsy to take on such a role and emotes through her powerful eyes. Her third release in 2015 was Gunashekar's bilingual Rudhramadevi in which she portrays the title role of Kakatiya dynasty queen Rudrama Devi opposite Rana Daggubati and Allu Arjun.[61] AP Herald wrote, "Anushka Shetty was very believable and appreciable as a royal torrid and an honorable woman. Hers is a dual character, that of next to kin 'Rudhradeva' and of powerful 'Rudhramadevi' are superb. She plays her dual role in her characters in style and lends credibility to both the characters."[62] Her Final release in 2015,Size Zero where she played as plus-sized women.The Hindu Claimed,A lot lies on Anushka Shetty’s shoulders. Utterly charming and a treat to watch, she comes up with one of her best performances.[63]