The four main valves in the heart are:

There are also the coronary sinus and the inferior vena cava valves. 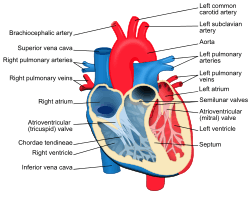 Structure of the heart valves

Blood flow through the valves

The heart valves and the chambers are lined with endocardium. Heart valves separate the atria from the ventricles, or the ventricles from a blood vessel. Heart valves are situated around the fibrous rings of the cardiac skeleton. The valves incorporate leaflets or cusps, which are pushed open to allow blood flow and which then close together to seal and prevent backflow. The mitral valve has two cusps, whereas the others have three. There are nodules at the tips of the cusps that make the seal tighter.

3D - loop of a heart viewed from the apex, with the apical part of the ventricles removed and the mitral valve clearly visible. Due to missing data, the leaflets of the tricuspid and aortic valves are not clearly visible, but the openings are; the pulmonary valve is not visible. On the left are two standard 2D views (taken from the 3D dataset) showing tricuspid and mitral valves (above) and aortal valve (below).

These are the mitral and tricuspid valves, which are situated between the atria and the ventricles and prevent backflow from the ventricles into the atria during systole. They are anchored to the walls of the ventricles by chordae tendineae, which prevent the valves from inverting.

The mitral valve is also called the bicuspid valve because it contains two leaflets or cusps. The mitral valve gets its name from the resemblance to a bishop's mitre (a type of hat). It is on the left side of the heart and allows the blood to flow from the left atrium into the left ventricle.

The tricuspid valve has three leaflets or cusps and is on the right side of the heart. It is between the right atrium and the right ventricle, and stops the backflow of blood between the two.

The aortic and pulmonary valves are located at the base of the aorta and the pulmonary trunk respectively. These are also called the "semilunar valves". These two arteries receive blood from the ventricles and their semilunar valves permit blood to be forced into the arteries, and prevent backflow from the arteries into the ventricles. These valves do not have chordae tendineae, and are more similar to the valves in veins than they are to the atrioventricular valves. The closure of the semilunar valves causes the second heart sound.

In the developing heart, the valves between the atria and ventricles, the bicuspid and the tricuspid valves, develop on either side of the atrioventricular canals.[7] The upward extension of the bases of the ventricles causes the canal to become invaginated into the ventricle cavities. The invaginated margins form the rudiments of the lateral cusps of the AV valves. The middle and septal cusps develop from the downward extension of the septum intermedium.

In general, the motion of the heart valves is determined using the Navier–Stokes equation, using boundary conditions of the blood pressures, pericardial fluid, and external loading as the constraints. The motion of the heart valves is used as a boundary condition in the Navier–Stokes equation in determining the fluid dynamics of blood ejection from the left and right ventricles into the aorta and the lung. 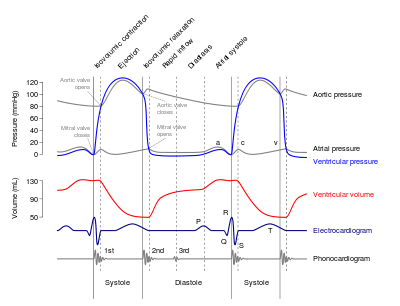 Wiggers diagram, showing various events during a cardiac cycle, with closures and openings of the aortic and mitral marked in the pressure curves. 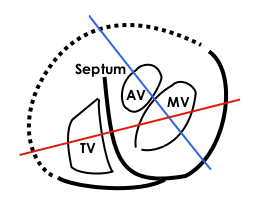 Relationship between pressure and flow in open valves

, across an open heart valve relates to the flow rate, Q, through the valve:

Valves with a single degree of freedom

Equations for the aortic valve in this case:

Valvular heart disease is a general term referring to dysfunction of the valves, and is primarily in two forms, either regurgitation, where a dysfunctional valve lets blood flow in the wrong direction, or stenosis, when a valve is narrow.[8]

Regurgitation occurs when a valve becomes insufficient and malfunctions, allowing some blood to flow in the wrong direction. This insufficiency can affect any of the valves as in aortic insufficiency, mitral insufficiency, pulmonary insufficiency and tricuspid insufficiency. The other form of valvular heart disease is stenosis, a narrowing of the valve. This is a result of the valve becoming thickened and any of the heart valves can be affected, as in mitral valve stenosis, tricuspid valve stenosis, pulmonary valve stenosis and aortic valve stenosis. Stenosis of the mitral valve is a common complication of rheumatic fever. Inflammation of the valves can be caused by infective endocarditis , usually a bacterial infection but can sometimes be caused by other organisms. Bacteria can more readily attach to damaged valves.[9] Another type of endocarditis which doesn't provoke an inflammatory response, is nonbacterial thrombotic endocarditis. This is commonly found on previously undamaged valves.[9] A major valvular heart disease is mitral valve prolapse, which is a weakening of connective tissue called myxomatous degeneration of the valve. This sees the displacement of a thickened mitral valve cusp into the left atrium during systole.[8]

Disease of the heart valves can be congenital, such as aortic regurgitation or acquired, for example infective endocarditis. Different forms are associated with cardiovascular disease, connective tissue disorders and hypertension. The symptoms of the disease will depend on the affected valve, the type of disease, and the severity of the disease. For example, valvular disease of the aortic valve, such as aortic stenosis or aortic regurgitation, may cause breathlessness, whereas valvular diseaes of the tricuspid valve may lead to dysfunction of the liver and jaundice. When valvular heart disease results from infectious causes, such as infective endocarditis, an affected person may have a fever and unique signs such as splinter haemorrhages of the nails, Janeway lesions, Osler nodes and Roth spots. A particularly feared complication of valvular disease is the creation of emboli because of turbulent blood flow, and the development of heart failure.[8]

Valvular heart disease is diagnosed by echocardiography, which is a form of ultrasound. Damaged and defective heart valves can be repaired, or replaced with artificial heart valves. Infectious causes may also require treatment with antibiotics.[8]

The most common form of valvular anomaly is a congenital heart defect (CHD), called a bicuspid aortic valve. This results from the fusing of two of the cusps during embryonic development forming a bicuspid valve instead of a tricuspid valve. This condition is often undiagnosed until calcific aortic stenosis has developed, and this usually happens around ten years earlier than would otherwise develop.[10][11]

Less common CHD's are tricuspid and pulmonary atresia, and Ebstein's anomaly. Tricuspid atresia is the complete absence of the tricuspid valve which can lead to an underdeveloped or absent right ventricle. Pulmonary atresia is the complete closure of the pulmonary valve. Ebstein's anomaly is the displacement of the septal leaflet of the tricuspid valve causing a larger atrium and a smaller ventricle than normal. 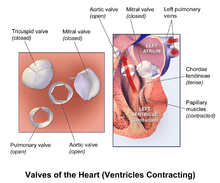 Illustration of the valves of the heart when the ventricles are contracting.