Incidents of social unrest in subsequent years helped prompt the Fraga Law in 1904, which provided for the inclusion of neighborhood representatives as commissioners in their respective precincts. The failed Revolution of 1905, by which the UCR sought to bring about reforms to the undemocratic electoral system, led to the appointment of a conservative congressman, retired Col. Ramón Falcón, to the post of chief of police; Falcón's repressive tenure ended with his 1909 assassination.[2]

The current entity resulted from an initiative by the chief of police, Col. Emilio Ramírez, assisted by LTCOL Enrique Fentanes. A panel convened by the police chief presented its findings to support the establishment of the Federal Police on November 8, 1943, and on December 24, Decree 17.750 was signed by President Pedro Pablo Ramírez (the father of the chief of police). The new force did not immediately replace the Capital Police, but was instead transferred duties under the latter's purview incrementally. The first important such transfer was the February 7, 1944, assignment as the Presidential Guard of the Casa Rosada, and on March 10, the process of unifying the two forces was initiated by decree, concluding officially on January 1, 1945.

The Federal Police changed slowly in its organizational structure in subsequent decades. Initially maintaining 45 precincts, it added five in 1946, two in 1976, and a 53rd in 1999. Its subordinate role to the national executive increasingly made the force a political instrument during the country's often authoritarian regimes. General Juan Carlos Onganía, president after a 1966 coup, named a Federal Police director, Luis Margaride, who shared his distaste for modern culture, resulting in crusades against nightclubs, long hair, and miniskirts.[3] Facing a government policy backdrop such as this, numerous avant-garde artists (and others, particularly in academia) left Argentina, many never to return.[3] The return of exiled President Juan Perón in 1973 resulted in conflict with the PFA, when the calculating populist had Alberto Villar named as chief at the behest of adviser José López Rega. Villar was a member of López Rega's newly organized paramilitary group, the Argentine Anticommunist Alliance, and Villar's participation in spiraling violence between the group and those on the far left led to his assassination in 1974. The institution's prestige was further damaged following the March 1976 coup, when the force participated in the abduction, torture and murder of thousands of dissidents and others.[3] It was only with the 1983 presidential elections (and the return to democratic rule) that the FP began restoring its prestige and its relations with the Argentine people, especially with the 1986 appointment of Juan Angel Pirker as police commissioner general.

The 1993 Olivos Pact between President Carlos Menem and his predecessor, UCR leader Raúl Alfonsín resulted in the 1994 reform of the Argentine Constitution, whose article 129 granted the City of Buenos Aires greater self-governance. This in principle included the transfer of control of the 25,000-strong Federal Police to the Jefe de Gobierno (elected Mayor), and the Buenos Aires City Legislature. Shortly before the historic, June 30, 1996, elections to these posts, however, a senior Peronist Senator, Antonio Cafiero, succeeded in limiting the city's autonomy by advancing National Law 24.588, which reserved control of the force, among other faculties, to the national government.[4]

The controversial bill, signed in 1996 by President Menem, remained a sticking point between successive Presidents (most of whom have been Peronist) and Buenos Aires Mayors (none of whom have been). A 2005 agreement on principles between Mayor Aníbal Ibarra and President Néstor Kirchner was followed by the modification of the especially contentious article 7, which denied the city its own, local police force, in 2007 - though the "Cafiero Law" otherwise remains in force. Efforts since 2007 by Mayor Mauricio Macri to declare it unconstitutional have thus far failed, and though the Mayor inaugurated a Metropolitan Police, issues of revenue sharing for its financing remain pending.[5]

The PFA, since 1974, maintains a university specializing in criminology, is associated with Interpol, and participates in special forces training programs at the Los Angeles Police Department. 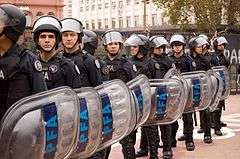 PFA officers during the 2008 Olympic Torch Relay in Buenos Aires

The PFA's headquarters, known as the Departamento Central de Policía, is located at 1650 Moreno Street, in the Montserrat section of Buenos Aires. The over 12,000 m² (128,000 ft²) resulted from an 1868 proposal for its construction, which was ultimately approved in 1884. Designed by Juan Antonio Buschiazzo, and engineered by Francesco Tamburini, the ornate headquarters is an eclectic structure with influences from Baroque architecture, and features a number of patios, notably the central, Palm Tree Patio. Argentine Passports were issued to local residents at this location until 1996.

The organization of the PFA is as follows:

Superintendencies are commanded by a superintendente, a less common word in Spanish. Both superintendente and the much more common Spanish word comisario normally translate into English as superintendent, which creates some translation problems when discussing Argentine police services.

Training for all serving agents of the service is done by the following institutions:

Aside from stations in Buenos Aires, it maintains provincial stations in select capital cities and several towns of the Provinces of Argentina. The FFS also doubles as the state fire service as well.