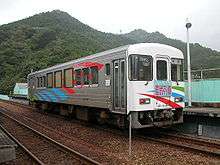 The Asatō Line (阿佐東線, Asatō-sen, "Asa East Line") is a Japanese railway line connecting Kaifu Station, Kaiyō and Kannoura Station, Tōyō. Together with JR Shikoku's Mugi Line, it has the official nickname Awa Muroto Seaside Line (阿波室戸シーサイドライン, Awa Muroto Shīsaido Rain). This is the only railway line Asa Kaigan Railway (阿佐海岸鉄道, Asa Kaigan Tetsudō, "Asa Coastal Railway") operates. The company is abbreviated as Asatetsu (阿佐鉄). Since the line goes through a relatively sparsely populated area, it is under severe business stress, to the point where closure of the line has been proposed.

The first 12km section to Kaifu opened in 1973, and further construction undertaken until work was suspended in 1980. In 1988 construction work south of Kaifu was recommenced by the Asa Kaigan Railway, the newly founded third sector company. The Kaifu - Kannoura section, now called the Asatō Line, opened in 1992.

The western portion of the planned Asa Line opened as Tosa Kuroshio Railway Asa Line to Nahari in 2002. The Kannoura - Nahari section of the proposed Asa line has not been constructed. The proposed stations were None, Muroto, Kiragawa and Tosa-Hane.