In addition to scheduled passenger operations, the airport is the base of the Japan Maritime Self-Defense Force Tokushima Air Training Group of 202 Air Training Squadron equipped with Beechcraft TC-90 and UH-60J Search and Rescue helicopter of one flight which detached from JMSDF 72 Squadron. As a result, it is the busiest airport in Shikoku by aircraft operations, with around 15,000 takeoffs and landings each year. The Japan Ground Self-Defense Force established the 14 Squadron flying at least two Fuji UH-1J and one Kawasaki OH-6D by mid-April 2010 at the airport. 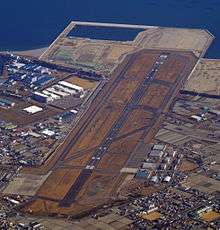 Tokushima Airport opened as an Imperial Japanese Navy air base in 1941.

On April 13, 2006, Skymark Airlines discontinued its flights to Tokyo International Airport (Haneda) leaving Japan Airlines as the sole carrier to Tokyo. In response to Skymark's exit, Japan Airlines increased the number of flights between the two cities. Since Tokyo-Haneda opened its fourth runway, All Nippon Airways announced to resume its service to Tokyo.

A new passenger terminal opened in the first quarter of 2010.