In 1944, the club competed in the first Campeonato Goiano, which was also the first official football championship in the state, and was contested between five clubs from Goiânia. The other teams were Goiânia, Vila Nova, Goiás and Campinas. Atlético Goianiense won the competition, being its first title. In 1957, the club won the state championship without losing a match, also winning the Torneio dos Invictos, played in the same year.

In 1971, the team won the Torneio da Integração Nacional, beating Ponte Preta in the final. In 1990, after defeating América Mineiro in the penalty shootout, Atlético Goianiense won the Campeonato Brasileiro Série C.

In 2003, Atlético Goianiense finished in the state championship's last place, and was relegated to the following year's second division. In 2005, the club won the Goiás State Championship Second Division, being promoted to the following year's First Division. In 2006, the club finished in second place in the Goiás State Championship First Level, and they won the league in 2010 and in 2011.The club competed in the Copa Sudamericana in 2012.

The club's greatest achievement was in 2016, when they won the Campeonato Brasileiro Série B. 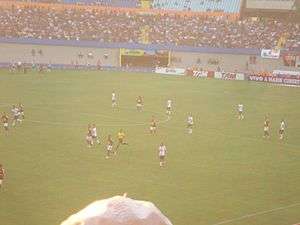 Match between Atlético Goianense and Corinthians.

The club plays its home matches at Estádio Antônio Accioly, which has a maximum capacity of approximately 12,000 people. Instead the club has plans to make his own modern arena for more than 15,000 to replace Antônio Accioly Stadium.

Atlético Goianiense's mascot is a red dragon symbolizing the club. The club is nicknamed Dragão, meaning Dragon. The flag is similar to the club's home kit, with red and black horizontal stripes, and the logo in the center.

Atlético's official anthem was composed by Joaquim Jayme, however, there is another, non-official, anthem.