Paraná Clube is a Brazilian football club, established on December 19, 1989, in Curitiba, Paraná. It is one of the several Brazilian clubs called Tricolor da Vila ("tricolored of the town") by its fans, because of its three colors and reside in the district of Vila Capanema.

Apart from football, other sports practiced at the club are bowling, futsal, martial arts, tennis, volleyball and weight-lifting.[1]

On December 19, 1989, Paraná Clube was founded by the merger of EC Pinheiros (three times winner of the state championship (1967 as Savóia FC Água Verde, 1984, 1987)), and Colorado EC (winner of one state championship (1980)). Rubens Minelli was hired as the club's first manager,[2] and Emerson de Andrade was chosen as the director of football.[3]

In 1992, the club won the Campeonato Brasileiro Série B, gaining the right to compete in the following year's Série A.[6] After 8 years, Paraná Clube won another national championship. In 2000, Paraná beat AD São Caetano to win the Yellow Module of the João Havelange Cup. This cup replaced the Campeonato Brasileiro (all levels), which had been suspended for one year.[7]

On April 9, 2006, Paraná Clube won the Paraná State League for the 7th time after beating ADAP of Campo Mourão 3–0 in the Maringá and drawing 1–1 at Pinheirão Stadium. The attendance of the final match was 25,306 supporters.[9]

Paraná Clube's stadium is the Estádio Durival Britto e Silva, also known as the Vila Capanema. It underwent a modernization in 2006, when more than 60 skyboxes were built, as well as new bathrooms and snack bars. The capacity of the "new" Vila Capanema rose to 20,083 spectators, and the inaugural match was held on September 20, 2006 when Paraná beat Fortaleza 2–0 in the Campeonato Brasileiro.

In 2007, Paraná played its first Copa Libertadores de América match. In the first stage, Paraná eliminated Cobreloa from Chile, winning the first leg 2–0 in Calama and drawing 1–1 in Curitiba. In the group stage, the club finished in second place. Paraná was eliminated in the Round of 16 by Libertad, of Paraguay.[10] 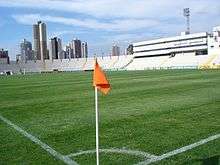 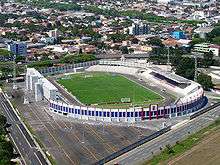 Paraná Clube's official stadium is Estádio Durival Britto e Silva, also known as Vila Capanema. They occasionally used to play at the Pinheirão.[11] Vila Olímpica also belongs to Paraná Clube but it is only used for training:[12]

The club's logo has a stylized conifer cone format, in red, with a white contour, and inside there are an azure jay and a white pine. The club's name is written in blue, as well as the word Brasil. The word Clube is written in white.[2]

Paraná's flag is rectangular, divided in two equal parts vertically. The right side is red and the left side is blue.[2]

The Paraná Clube anthem was written by João Arnaldo and Sebastião Lima.[2]

Paraná Clube's colors are red, blue and white. The red color was Colorado's main color, the blue color was Pinheiros' main color, and white was a color adopted by both teams.[2]

Their biggest rivals are from the same city: Atlético-PR and Coritiba.[2] 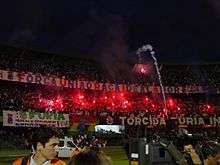 Paraná Clube fanbase is distributed mostly in Curitiba and its metropolitan area, as well as Paraná state coast. According to recent polls made by Curitiba's newspaper Gazeta do Povo, Paraná Clube has more than 300,000 fans in the city (almost 15%). The number of fans outside Curitiba is unknown.

Paraná's average attendance is around 12,000 fans per game, which is almost the same number as the general average of the Campeonato Brasileiro in 2006.

1In 2000, Paraná Clube won the Yellow Module of the Copa João Havelange. This title is not recognized by the CBF.[13]