This article is about the military strategy. For the Israeli-Egyptian conflict, see War of Attrition. For the game theoretical model, see War of attrition (game).

Attrition warfare is a military strategy in which a belligerent attempts to win a war by wearing down the enemy to the point of collapse through continuous losses in personnel and materiel. The war will usually be won by the side with greater such resources.[1] The word attrition comes from the Latin root atterere to rub against, similar to the "grinding down" of the opponent's forces in attrition warfare.[2]

Military theorists and strategists have viewed attrition warfare as something to be avoided. In the sense that attrition warfare represents an attempt to grind down an opponent through superior numbers, it represents the opposite of the usual principles of war in which one attempts to achieve decisive victories by using minimal necessary resources and in minimal amount of time, through maneuver, concentration of force, surprise, and the like.

On the other hand, a side that perceives itself to be at a marked disadvantage in maneuver warfare or unit tactics may deliberately seek out attrition warfare to neutralize its opponent's advantages. If the sides are nearly evenly matched, the outcome of a war of attrition is likely to be a Pyrrhic victory.

The difference between war of attrition and other forms of war is somewhat artificial since war always contains an element of attrition. One can be said to pursue a strategy of attrition if one makes it the main goal to cause gradual attrition to the opponent eventually amounting to unacceptable or unsustainable levels for the opponent while limiting one's own gradual losses to acceptable and sustainable levels. That should be seen as opposed to other main goals such as the conquest of some resource or territory or an attempt to cause the enemy great losses in a single stroke (such as by encirclement and capture).

Attritional methods are in themselves usually sufficient to cause a nation to give up a nonvital ambition, but other methods are generally necessary to achieve unconditional surrender. 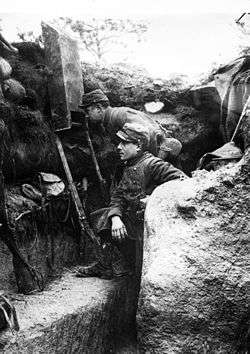 It is often argued that the best-known example of attrition warfare was on the Western Front during World War I.[3] Both military forces found themselves in static defensive positions in trenches running from Switzerland to the English Channel. For years, without any opportunity for maneuvers, the only way the commanders thought that they could defeat the enemy was to repeatedly attack head on and grind the other down.[4]

One of the most enduring examples of attrition warfare on the Western Front is the Battle of Verdun, which took place throughout most of 1916. Erich von Falkenhayn later claimed that his tactics at Verdun were designed not to take the city but rather to destroy the French Army in its defense. Falkenhayn is described as wanting to "bleed France white"[5] and thus the attrition tactics were employed in the battle.

Attritional warfare in World War I has been shown by historians such as Hew Strachan to have been used as a post hoc ergo propter hoc excuse for failed offensives. The decision to launch a war of attrition at Verdun was also used to mask the failure of Falkenhayn's original tactical plan.Citation needed Contemporary sources disagree with Strachan's view on this. While the Christmas Memorandum is a post-war invention, the strategy of "Bleeding France white" was the original strategy for the battle.[6]

Attrition to the enemy was easy to assert and difficult to refute and thus may have been a convenient facesaving excuse in the wake of many indecisive battles. It is, in many cases, hard to see the logic of warfare by attrition because of the obvious uncertainty of the level of damage to the enemy and of the damage that the attacking force may sustain to its own limited and expensive resources while trying to achieve that damage. Historians such as John Terraine and Gary Sheffield have suggested that attritional warfare was, however, a necessary step on the road to eventual victory, a 'wearing down process' that sapped Central Powers strength and left them vulnerable during the Hundred Days campaign of 1918.

That is not to say that a general will not be prepared to sustain high casualties while trying to reach an objective. An example in which one side used attrition warfare to neutralize the other side's advantage in maneuverability and unit tactics occurred during the latter part of the American Civil War, when Ulysses S. Grant pushed the Confederate Army continually, in spite of losses, he correctly predicted that the Union's supplies and manpower would overwhelm the Confederacy even if the casualty ratio was unfavorable.