The following outline is provided as an overview of and topical guide to war:

War – organised and often prolonged armed conflict that is carried out by states and/or non-state actors – is characterised by extreme violence, social disruption, and economic destruction.[1][2] War should be understood as an actual, intentional and widespread armed conflict between political communities, and therefore is defined as a form of political violence or intervention.[1][3]

An absence of war is usually called peace.

Warfare by equipment or weapon type 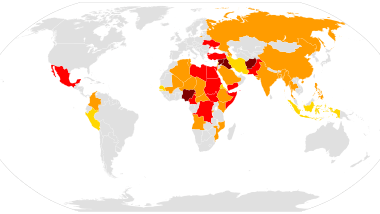 See: Warfare by era, above

Wars by type of conflict

Types of military operations, by scope:

Philosophy of war – examines war beyond the typical questions of weaponry and strategy, inquiring into such things as the meaning and etiology of war, the relationship between war and human nature, and the ethics of war.

During the Middle Ages

During the Mongol Invasions

During the Hundred Years' War

At the Siege of Malta

During the American Revolution

During the Napoleonic Wars

During the Taiping Rebellion

During World War I