For other places known by this name, see Sansha (disambiguation).

Sansha is a prefecture-level city of Hainan province of the People's Republic of China. It administers (actually or nominally) several island groups and undersea atolls in the South China Sea including the Spratly Islands, the Paracel Islands and the Macclesfield Bank, and a number of other ungrouped maritime features.[2] The entire territory is disputed,[3][4][5] and the PRC's de facto control over the area varies.

Foreign reaction to the declaration was not positive. The United States Department of State called the change in the administrative status of the territory "unilateral", and the move has received criticism from nations engaged in the South China Sea dispute, particularly the Philippines and Vietnam.[9]

The centre of government for Sansha is located on Woody Island (Yongxing Dao) in the Paracels,[10] where about 1,000 Chinese (PRC) reside.[8] With a land area of 210ha, Woody Island is the largest contiguous land area in the South China Sea.[11] The total land area of Sansha, which includes the islands in the Paracel and Spratly groups, is less than 5 square miles (13 km2).[12] Nationally, Sansha is the smallest prefecture-level city, by both population and land area, but the largest by total area,[13] and is also the southernmost prefecture-level city of the PRC.

On 16 February 2016, the U.S. Department of Defense announced that the Chinese had deployed HQ‑9 surface‑to‑air missiles on the island.[14] 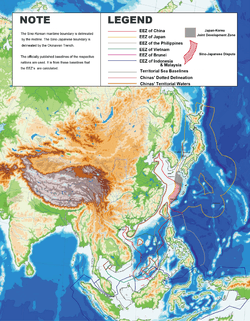 New Baselines and EEZs of China

Following being given approval by the State Council on 24 March 1953,[15] the "Guangdong Province Paracels, Spratlys, and Zhongsha Islands Authority" was established as a county-level administrative division on Woody Island (Yongxing Dao). During the Cultural Revolution, when Revolutionary Committees were being set up across the country, the Authority was upgraded to the "Guangdong Province Paracels, Spratlys, and Zhongsha Islands Revolutionary Committee" on 4 March 1959.[15] On 22 October 1981 the original Authority was restored. Administration was transferred to Hainan on National Day, 1984, when the Hainan Administrative Region was established, followed by the establishment of Hainan Province on 13 April 1988. On 19 September 1988,[15] the Authority's name was officially changed to the "Hainan Province Paracels, Spratlys, and Zhongsha Islands Authority". On 25 December 2006, Woody Island census-town's first-ever Residents' and Fishermen's Congress was held. Three representatives at the township and village levels were selected to represent the census-town's Neighborhood Committee of the North and South Villages. The Neighborhood Committee began work on Woody Island the following day with an office at the Border Guards of the Paracels' Police Station. These were the first ever actual subdivisions created within the county-level authority.[15]

The prospect of the establishment of a "city" on Woody Island was first mooted on 19 November 2007 in a report by Mingpao, a Hong Kong-based newspaper, through a telephone interview with a Mr. Zhang of the Propaganda Department of Wenchang, Hainan. This report claimed that a county-level city was to be established by the PRC State Council in November 2007 to administer three disputed archipelagos in the South China Sea:[16] the Paracel Islands, Macclesfield Bank (Zhongsha Islands) and the Spratly Islands. This was to replace the county-level "Paracels, Spratlys, and Zhongsha Islands Authority". The city of Wenchang would provide supplies and logistics to the to-be-established city.

On 23 July 2012 the PRC Central Military Commission announced it had authorized the People's Liberation Army Guangzhou Military Command to form a "garrison command" in Sansha City. The troops would be responsible for managing the city's national defence mobilisation, military reserve, and carrying out military operations.[17]

On 24 July 2012, the PRC officially established the city of Sansha in Yongxing Island.[6]

Sansha is governed by a municipal congress of 60 delegates directly elected, with a standing committee of 15 members.[18] It is further subdivided into 3 islands-districts at county-level, 4 towns/management committees at the township-level, and further into 11 residential communities at village-level, based on the island groups:

Because Sansha's jurisdiction comprises island groups that several nations besides the PRC claim as their own, the "city" is considered by some as controversial.

In 2007, the Foreign Ministry of Vietnam protested against the city's proposed establishment, which had been recently [23] approved by the PRC's State Council, as Vietnam claims two of the three island groups that comprise Sansha.[24] This was later followed by student demonstrations at the Chinese embassy in Hanoi, and at a consulate in Ho Chi Minh City.[25]

Days prior to the official establishment of the city in late July 2012,[6] Vietnam again stated its opposition and was joined in its protests by the Philippines.[26] The United States Department of State also weighed in on the issue stating, "we remain concerned should there be any unilateral moves of this kind that would seem to prejudge an issue."[27] The chair of the US Senate Foreign Relations East Asian and Pacific Affairs Subcommittee, Jim Webb, also made a statement regarding Sansha and questioned whether the city's creation was a violation of international law.[28] While Senator Webb stated that the establishment of Sansha was China "creating a governmental system out of nothing",[28] the Chinese government has included the island groups that comprise Sansha in its administrative structure since 1959.[29] Before these island groups were under the nominal administration of Sansha, they were nominally administered by an administrative office under the provincial government of Hainan.[10]

The second stage of a greening project for Sansha was announced on 30 June 2014.[30] It states: "According to the investment plan, 18 million yuan (about 2.92 million U.S. dollars) will be used to build desalination systems and grow trees on Xishazhou Island (West Sand - NW Crescent Group) in the hope of turning the island into a new oasis." The article makes references to the greening of: