History of the administrative divisions of China before 1912

For other uses, see History of the administrative divisions of China.

The history of the administrative divisions of the Imperial China is quite complex. Across history, what is called 'China' has taken many shapes, and many political organizations. For various reasons, both the borders and names of political divisions have changed—sometimes to follow topography, sometimes to weaken former states by dividing them, and sometimes to realize a philosophical or historical ideal. For recent times, the number of recorded tiny changes is quite large; by contrast, the lack of clear, trustworthy data for ancient times forces historians and geographers to draw approximate borders for respective divisions. But thanks to imperial records and geographic descriptions, political divisions may often be redrawn with some precision. Natural changes, such as changes in a river's course (known for the Huang He, but also occurring for others), or loss of data, still make this issue difficult for ancient times.

See also: List of current and former capitals of subnational entities of China

Before the establishment of the Qin Dynasty, China was ruled by a network of kings, nobles, and tribes. There was no unified system of administrative divisions. According to ancient texts, China in the Xia and Zhou dynasties consisted of nine zhou, but various texts differ as to the names and even functions of these zhous.

During the Zhou dynasty, the nation was nominally controlled by the "Son of Heaven". In reality, however, the country was divided into competing states, each with a hereditary head, variously styled "prince", "duke", or "king". The rivalry of these groups culminated in the Warring States period, which ended with the victory of Qin.

Provinces under the Qin dynasty 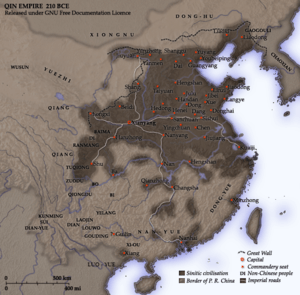 The boundaries and commandery capitals of the Qin Empire in 210 BC. 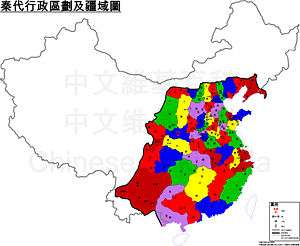 After the Kingdom of Qin managed to subdue the rest of China in 221 BC, the First Emperor divided his realm into relatively small commanderies, which were divided into still smaller counties. Repudiating the fiefs of the Zhou, both levels were centrally and tightly controlled as part of a meritocratic system. There was also a separately-administered capital district known as the Neishi.

The commanderies were grouped into four large divisions: Guanzhong, named for the lower valley of the Wei River around the capital "within the pass" leading to the North China Plain; Hebei north of the Yellow River; Henan south of it; and Jianghan, named for the Yangtze and Han rivers and incorporating the conquered lands of modern Hunan and Guangdong. Control over some of these, particularly Fujian ("Min Commandery"), was particularly loose.

Provinces under the Han and Jin Dynasties

Further information: the Chinese Wikipedia articles on the administrative divisions of the Western Han, Xin, and Eastern Han Dynasties 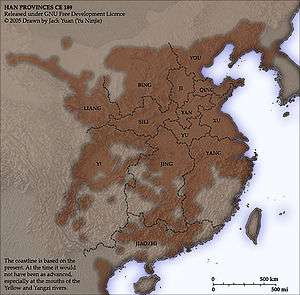 The Han Dynasty initially added a top level of "kingdoms" or "principalities" (王国, wángguó), each headed by a local king or a prince of the imperial family. From the establishment of the dynasty, however, the tendency was slowly absorb this quasi-federal structure into the imperial bureaucracy. After the Rebellion of the Seven States, the system was standardized, replacing the kingdoms and principalities with thirteen provinces (州, zhōu).

Throughout the Han Dynasty, the Three Kingdoms Period, and the Western Jin Dynasty, this system remained intact. This changed, however, with the invasion of tribes from the north, who disrupted the unity of China and set up a variety of governments.

* One of the original provinces established during the Eastern Han Dynasty

Ping was formed out of You; Qin out of Liang (涼/凉); Liang (梁) and Ning out of Yi; and Guang out of Jiao. Jiao had been established from a territory called Jiaozhi (交趾); Si too was a new creation, its territory formerly administered by a metropolitan commandant (司隷校尉, Sīlì xiàowèi) with capacities similar to the provincial governors'. Shuofang (朔方, Shuòfāng), a similar territory in northern Shaanxi, was merged into Bing rather than becoming a full province in its own right.

Further information: the Chinese Wikipedia article on the administrative divisions of the Sui Dynasty 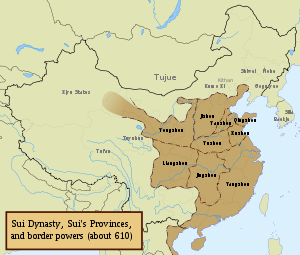 By the time unity was finally reestablished by the Sui Dynasty, the provinces had been divided and redivided so many times by different governments that they were almost the same size as commanderies, rendering the two-tier system superfluous. As such, the Sui merged the two together. In English, this merged level is translated as "prefectures". In Chinese, the name changed between zhou and jun several times before being finally settled on zhou. Based on the apocryphal Nine Province system, the Sui restored nine zhou.[2]

The Sui had 9 provinces, 190 prefectures, 1,225 counties, and about 9 million registered households or approximately 50 million people.[3]

Provinces under the Tang Dynasty 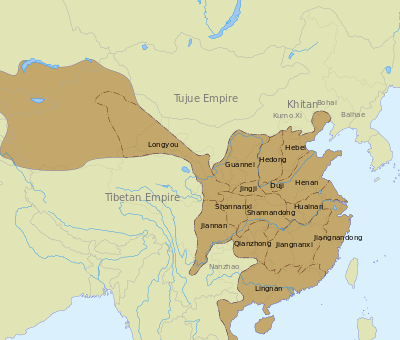 Emperor Taizong (r. 626−649) set up 10 "circuits" (道, dào) in 627 as inspection areas for imperial commissioners monitoring the operation of prefectures, rather than a new primary level of administration. In 639, there were 10 circuits, 43 commanderies (都督府, dūdū fǔ), and 358 prefectures (州 and later 府, fǔ).[4] In 733, Emperor Xuanzong expanded the number of circuits to 15 by establishing separate circuits for the areas around Chang'an and Luoyang, and by splitting the large Shannan and Jiangnan circuits into 2 and 3 new circuits respectively. He also established a system of permanent inspecting commissioners, though without executive powers.[5]

The Tang Dynasty also created military districts (藩鎮/藩镇, fānzhèn) controlled by military commissioners (節度使/节度使, jiédushǐ) charged with protecting frontier areas susceptible to foreign attack (similar to the Western marches and marcher lords). This system was eventually generalized to other parts of the country as well and essentially merged into the circuits. Just as in the West, the greater autonomy and strength of the commissioners permitted insubordination and rebellion, which in China led to the Five Dynasties and Ten Kingdoms period.

Provinces under the Song Dynasty

The Song Dynasty abolished the commissioners and renamed their circuits 路 (lù, which however is still usually translated into English as "circuits"). They also added a number of "army" prefectures (軍/军, jūn).

Provinces under the Jin and Southern Song Dynasties

The Jurchens invaded China proper in Jin–Song wars of the 12th century. In 1142, peace was formalized between the Jurchen Jin dynasty and the Southern Song Dynasty, which was forced to cede all of North China to the Jurchens.

By the beginning of the 13th century, the Jurchens had moved their capital to Zhongdu (modern Beijing) and had adopted Chinese administrative structures. The Song Dynasty also maintained the same structure over the southern half of China that they continued to govern.

Provinces under the Yuan Dynasty

The Mongols, who succeeded in subjugating all of China under the Yuan Dynasty in 1279, introduced the precursors to the modern provinces as a new primary administrative level:

The area around the capital, corresponding to modern Hebei, Shandong, Shanxi, central Inner Mongolia, Beijing, and Tianjin, was called the Central Region (腹裏/腹里) and not put into any province, but was directly controlled by the Central Secretariat (Zhongshu Sheng). The Tibetan Plateau was controlled by the Bureau of Buddhist and Tibetan Affairs (Xuanzheng Yuan).

Provinces under the Ming Dynasty

The Ming Dynasty continued with this system and had provinces that were almost exactly the same as those in modern China proper. The differences were Huguang had not yet been split into Hubei and Hunan; Gansu and Ningxia were still part of Shaanxi; Anhui and Jiangsu were together as South Zhili; portions of what are today the provinces of Hebei, Beijing, and Tianjin were part of the province of North Zhili; and Hainan, Shanghai, and Chongqing were still parts of their original provinces at this time. This makes for a total of 15 provinces. Jiaozhi Province, formerly known as Jiaozhi, Jiaozhou, Lingnan and Rinan, was also re-established in 1407 when the area encompassing northern and central Vietnam was reconquered for the fourth time. However, the province eventually emerged as its own state in 1428 under the Later Le Dynasty of Dai Viet.

Provinces and Protectorates under the Qing Dynasty 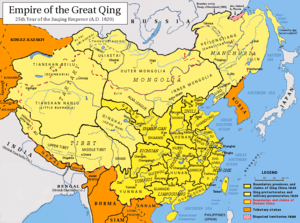 1820's China and its provinces, near its greatest extent.

In 1644, Beijing fell to the Manchus, who established the Qing Dynasty, the last dynasty of China. The Qing government applied the following system over China proper:

The Qing split Shaanxi into Shaanxi and Gansu, Huguang into Hubei and Hunan, and South Zhili into Jiangsu and Anhui. Hebei was now called Zhili rather than North Zhili. These provinces are now nearly identical to modern ones. Collectively they are called the "Eighteen Provinces", a concept that endured for several centuries as synonymous to China proper.

This system applied only to China proper, with the rest of the empire under differently systems. Manchuria, Xinjiang, and Outer Mongolia were ruled by military generals assigned by the Lifan Yuan, while Inner Mongolia was organized into leagues. The Qing court put Amdo under their direct control and organized it as Qinghai and also sent imperial commissioners to Tibet (Ü-Tsang and western Kham, approximately the area of the present-day Tibet Autonomous Region) to oversee its affairs.

In the late 19th century, Xinjiang and Taiwan were both set up as provinces. However, Taiwan was ceded to Imperial Japan after the First Sino-Japanese War in 1895. Near the end of the dynasty, Manchuria was also reorganized into three more provinces (Fengtian, Jilin, Heilongjiang), bringing the total number to twenty-two. In 1906, the first romanization system of Mandarin Chinese, postal romanization, was officially sanctioned by the Imperial Postal Joint-Session Conference, which showed in the following table.