Alagar koyil is a village in Madurai district in the South Indian state of Tamil Nadu. The history and living of the village is centered around Kallazhagar Temple. Constructed in the Dravidian style of architecture, the temple is glorified in the Divya Prabandha, the early medieval Tamil canon of the Azhwar saints from the 6th–9th centuries AD. It is one of the 108 Divyadesam dedicated to Vishnu, who is worshipped as Kallazhagar and his consort Lakshmi as Thirumamagal.[1] 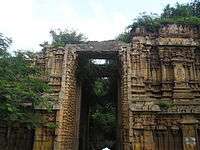 One of the broken gateway towers of the temple

Kallazhagar temple covers an area of about 2 acres (0.81 hectares) and has a five-tiered gopuram (gateway tower). The temple in enclosed in a rectangular enclosure with huge granite walls. The central shrine houses the image of the presiding deity, Uragamellayan Perumal in reclining posture on a snake bed similar to that of Srirangam Ranganathaswamy temple. The images of Sridevi and Bhudevi are also housed in the sanctum. There two life size images of Narasimha, the avatar of Vishnu. One of them is shown holding the demon Hiranya and other slaying him.[2]