Soundararajaperumal Temple is a temple dedicated to Hindu god Vishnu, located in Thadikombu, a village near Dindigul in the South Indian state of Tamil Nadu. Constructed in Dravidian style of architecture, the temple is believed to have been built by Achyuta Deva Raya during the 16th century AD. Vishnu is worshiped as Soundararaja Perumal and his consort Lakshmi as Soundaravalli.

The temple is known for the Ranga Mandapam, which features rare life size sculptures. The temple has two inscriptions dating from the Nayak period. The temple has a five-tiered rajagopuram (gateway tower) and enshrined within a granite wall. The complex contains all the shrines and water bodies associated with it.

Soundararaja Perumal is believed to have appeared for sage Mandukya. The temple observes six daily rituals and three yearly festivals. The chariot festival, celebrated during the Tamil month of Chittirai (March–April), is the most prominent festival of the temple. The temple is maintained and administered by the Hindu Religious and Endowment Board of the Government of Tamil Nadu.

Mandukya means frog - once a sage was cursed to be in the form a frog in the place around the temple. He was troubled by a demon and the frog worshipped Vishnu for rescue. Vishnu was pleased by the devotion and saved the frog by killing the demon. Vishnu chose to stay at the place where he rescued the frog, which went on to become the temple.[1] 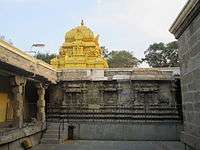 Andal shrine in the temple

During the 15th century, Dindigul was the scene of heavy warfare and people moved in large numbers to Thadikombu. The temple is believed to have been built during the rule of Achyuta Deva Raya (1529–1542 CE), the younger brother of Krishna Deva Raya, during the 16th century. The construction supposedly began during the rule of his predecessor, Aliya Rama Raya (1485 – 1565 CE). There are inscriptions from various ruling empires on the contributions made to the maintenance of the temple. The outer halls and the sculptures were included during the period of Thirumalai Nayak (1623–59) in 1629. A damaged inscription in the temple from the period of Rama Raya is found in the Garuda Mandapa. An inscription in the Sundara Pandya Madap indicates the conduct of marriage festival of Kallazhagar in Madurai. Other inscription mention that the people of Madurai consider Thadikombu as their northern settlement. It is also learnt that a chieftain by name Sundaresan appointed the priests of the temple.[2] It is also believed that a hall being named Sundarapandya, the temple might have existed from the earlier Pandyan era and might have been expanded by the Vijayanar kings.[3]

The temple is located in Thadikombu, a vilalge in the outskirts of Dindigul in the South Indian state of Tamil Nadu. The main entrance of the temple faces the East and at the entrance of the temple, there is a four pillared open hall. The temple has a 90 ft (27 m) tall rajagopuram (temple tower) and is enclosed by rectangular walls around it. The temple has two precincts. The temple is a madakovil, with its plithe constructed in an elevated platform around 2 m (6.6 ft) in height. The parapets in the steps are decorated with curled yalis, the lion faced Vijayanagar sculptures.[2][3]

The presiding deity, Soundararajan, is housed in the sanctum. The first precinct also has shrines for his consort, Soundaravalli, Andal and Viswaksenar. All the inner shrines face East, leaving the shrine of Viswaksenar, which faces South. The Dwajasthambam (flag staff) and a hall are located in axial alignment from the gateway tower to the sanctum. The South-west corner of the second precinct houses the image of Chakrathazwar. The images of the Dasavatara, the ten avatars of Vishnu, are housed in the Anna Mandapa.[2]

The Ranga Mandapam (also called Anna Mandapam) has beautiful architectural representation of various forms of Vishnu. It is located near the Soundaravalli shrine leading to the sanctum. It is believed that similar architectural specimens of the Vijayanagar kingdom is found in Alagar Koyil, Krishnapuram Venkatachalapathy temple, Srivilliputhur Divya Desam and Jalakandeswarar Temple, Vellore.[3]

The temple occupies an area of 1.5 acres (0.61 ha) and is surrounded by granite walls on all four sides. All four sides around the temple is paved in such a way to accommodate movement of the temple car during festive occasions. The presiding deity is housed in the sanctum in standing posture and has a height of 5 ft (1.5 m). Bhudevi and Sridevi are positioned on either side of him. The image of the festive deity is also housed in the sanctum. The Kalyan Mandapa has musical pillars, each of which produce different musical sounds. The same are found in Meenakshi Amman temple, Thanumalayan temple, Kasi Viswanathar temple, Tenkasi, Krishnapuram Venkatachalapathy temple and Azhwar Tirunagari temple. The image of standing Ganesa holding Angusa in his hands, Vishnu Durga containing exceptional features and Anjaneya occupying pillars are noteworthy. The fourteen life size images of the Sundarapandiya Mandapa are Vaikuntanatha, Stunanarasimha, Mahavishnu, Chakkarathazwar, Madanagopala, Manmadan & Rathi, Trivikrama, Nataraja & Kali, Agora Veerabhatra, Rama and Kartha Veerayarjuna.[2] 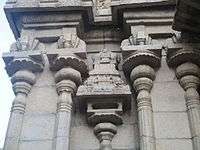 Image of sculpture in the temple

The temple follows the traditions of the Thenkalai sect of Vaishnavite tradition and follows vaikanasa aagama. The temple priests perform the pooja (rituals) during festivals and on a daily basis. As at other Vishnu temples of Tamil Nadu, the priests belong to the Vaishnavaite community, a Brahmin sub-caste. The temple rituals are performed four times a day: Kalasanthi at 8:00 a.m., Uchikalam at 12:00 p.m., Sayarakshai at 6:00 p.m., and Ardha Jamam at 10:00 p.m. Each ritual has three steps: alangaram (decoration), neivethanam (food offering) and deepa aradanai (waving of lamps) for both Soundararajan and Soundaravalli. During the last step of worship, nagaswaram (pipe instrument) and tavil (percussion instrument) are played, religious instructions in the Vedas (sacred text) are recited by priests, and worshippers prostrate themselves in front of the temple mast. There are weekly, monthly and fortnightly rituals performed in the temple.[1]