Ranganātha (Tamil: அரங்கநாதர், Sanskrit : रङ्गनाथ) also known as Sri Ranganatha, Aranganathar, Ranga and Thenarangathan is a Hindu deity, more well known in South India, and the chief deity of the Sri Ranganathaswamy Temple, Srirangam. The deity is a resting form of Lord Vishnu, recumbent on the great form of the serpent god Adisesha, one of the foremost of Hindu Gods. His consort is Goddess Lakshmi, also known as Ranganayaki Thayar (mother in Tamil). His two other consorts seen next to his recumbent figure are Bhudevi and Nila Devi. Most of the deities portray a 'smiling' lord in a reclining position over the celestial serpent Adisesha in the sea of cosmic dissolution (pralaya).[1] This is the form in which he is open to listening to all of his devotee's woes, and blesses them. Apart from being worshipped by all Hindus, this form is of particular importance to the Sri Vaishnava community.[2][3] His name in Tamil means "leader of the place of assembly", coined from two Tamil words 'Arangam' and 'Nathan'. This temple is of particular interest for scholars in the south because of the vast history attached to it in shaping the religion in the south. However, the lack of proper mention about this temple or Lord Vishnu as "resting on a bed of snake in an ocean of milk" in the "Puranas", the Vishnu Sahasranama or other Sanskrit texts pertaining to North India makes it a center of lesser importance in the north.

Symbolic representation of Ranganatha and Nataraja has been compared as the meaning of both is the same except for their locations. In Ranganatha, ‘Ranga’ means "stage" and which in the broadest sense refers to "the world, the cosmos or better still of the body and the senses". Nataraja also means the "Lord of the Stage" and in this case his stage is in ‘Chidambaram’ meaning the "sphere of wisdom", while Ranganatha rests on the milkyway, which is a metaphysical or esoteric concept which is not easy to interpret as it is perceived in different ways by different people.[4] 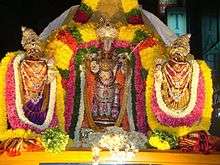 The Utsava Murthy of God Ranganatha in Bangalore

Parasara Batttar, well known poet of the times who has written a commentary on "Vishnu Sahasranama" (thousand names of Lord Vishnu) has noted the beautiful image of Ranganatha at Srirangam temple as ornamented with basil (tulsi) garland on the chest (favorite of Vishnu), Kaustubha, Vaijayanthi hara (a necklace) and a few other ornaments, which once formed the divine jewelry of Krishna, the avatar (incarnation) of Vishnu, are also decorating the image of Ranganatha.[8]

The Ranganatha temple is also the religious center of Sri Vaishnavism propagated by Saint Ramanuja from Srirangam. The temple worship at the Ranganatha Swamy temples is done traditionally in the Tamil and Sanskrit scriptures written by the 12 Alvars and Ramanuja.[9]

Also among the 108 Divya Desams (sacred places of worship of Lord Vishnu), Ranganatha or the reclining posture of the God can be found in many temples. Some of these temples are at Thirumayam, Thirukoshtiyur, Koviladi, Kapisthalam, Thiruneermalai, Tiruvallur, Anbil, Appokudathan, Mayiladuthurai, Srivilliputhur, and Padmanabhaswamy Temple at Tiruvanathapuram.

There are many other Ranganatha temples spread over many towns and villages of South India and to mention a few are: Pallikonda Ranganatha where his three consorts Shri Devi, Bhudevi and Nila Devi are also deified next to Ranganatha; At Singavaram, a rock cut reclining image of Ranganatha, which measures 7.5 metres (25 ft).[7] Other notable temples of Ranganatha are at Nellore, Namakkal and Bangalore, {Sri Varadhahastha aanjaneya swamy sametha sri ranganatha swamy temple}, {Narasambhudhi}, {Agali Mandal}, {Ananthapuramu District}, {AP}.