Kallazhagar Temple in Alagar Koyil, a village in the South Indian state of Tamil Nadu, is dedicated to the Hindu god Vishnu. Constructed in the Dravidian style of architecture, the temple is glorified in the Divya Prabandha, the early medieval Tamil canon of the Azhwar saints from the 6th–9th centuries AD. It is one of the 108 Divyadesam dedicated to Vishnu, who is worshipped as Kallazhagar and his consort Lakshmi as Thirumamagal.[1]

A granite wall surrounds the temple, enclosing all its shrines. The temple has a seven-tiered rajagopuram. The temple is surrounded by a large fort, part of which is dilapidated.

Kallazhagar is believed to have appeared sage Suthapava. The temple follows Thenkalai tradition of worship. Six daily rituals and many yearly festivals are held at the temple, of which the float festival during the Tamil month of Masi (February–March), Navrathri during September–October and Vaikunta Ekadasi during Margazhi (December–January) being the most prominent. The temple is maintained and administered by the Hindu Religious and Endowment Board of the Government of Tamil Nadu. 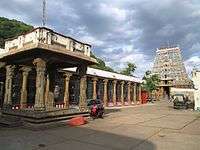 The gateway towers of the temple

As per Hindu legend, sage Suthapas was taking bath in Nupura Ganga at Azhagar Hill and did not pay heed to sage Durvasa, who was passing by. The enraged Durvasa cursed Suthapas that he would turn into a frog until he is redeemed of his curse by Sundararajar, who is also known as Kallazhagar. Suthapas Maharishi, who is named as ‘Manduka maharisi’ because of his frog form, performed penance on the banks of river Vaigai, which is otherwise known as Vegavathi, at Thenur. Kallazhagar descended from his abode in Azhagar Hill to redeem Manduka Maharishi off his curse. Since days unknown, it is believed that Kallazhagar comes to Thenur via Malaipatti, Alanganallur and Vayalur. In Thenur Mandap, the lord redeems the sage of his curse and leaves for his abode. "During Thirumalai Nayak regime (1623 to 1659 AD), in 1653 the Manduka Maharishi relieving ritual was shifted to Vandiyur village where the event is performed at Thennur Mandapam, built by Thirumalai Nayak himself,".[2]

Pillared halls of Kalyana Mandapam, where rare Vijayanagara period images are housed in the sculpted pillars

Kallazhagar temple covers an area of about 2 acres (0.81 hectares) and has a seven-tiered gopuram (gateway tower). The temple in enclosed in a rectangular enclosure with huge granite walls. The central shrine houses the image of the presiding deity, Uragamellayan Perumal in reclining posture on a snake bed similar to that of Srirangam Ranganathaswamy temple. The images of Sridevi and Bhudevi are also housed in the sanctum. There two life size images of Narasimha, the avatar of Vishnu. One of them is shown holding the demon Hiranya and other slaying him.[3]

The architecture of the Azhagar temple corresponds to any of those of south Indian temples, with large gopurams and pillared mandapams. The gopuram of the Karuppa swamy shrine depicts the passionate side of human relationship in the form of beautiful statues. Apart from these, it also depicts the evolution of cultural aspects of the local society including a depiction of an Englishman in British police uniforms.

The main tower entrance (Mukya Gopuram) always remains closed, with the shrine of Karupana Swami. The steps behind the closed door is worshipped as Patinettaam padi Karuppan(meaning, the black deity who occupies the eighteen steps ). There are various legends associated with it. Only Once in a year, the doors are opened and Sudarshana Chakra (Chakrathaazhvar), the famous Vishnu's wheel, passes over through the open door. This is a centuries-old practice, where even the festive deity of the presiding deity is not allowed to pass through the doors.

Some research scholars opine that this was earlier a Jain temple, (the Somaskanda Vimanamfor instance) but was later converted into a Vishnu temple. During archaeological excavations, many Jain caves and inscriptions were found in the same hill around this temple. However, the famous Vaishnava works in Tamil, belonging to the early 4th to 6th Centuries point that to this temple as a Vishnu temple. The Sangam age Silapadikaram belonging to 3rd Century AD, points out to this temple as a Vishnu temple. During 2013, while cleaning the area in front of Karupana Samy shrine, a big Teppakulam was discovered, filled with sand and covered with dense undergrowth.

Garuda, vahana of Vishnu carrying him

Kallazhagar temple is revered in Nalayira Divya Prabhandam, the 7th–9th century Vaishnava canon, by Periazhwar and Peyazhwar. The temple is classified as a Divyadesam, one of the 108 Vishnu temples that are mentioned in the book. During the 18th and 19th centuries, the temple finds mention in several works like 108 Tirupathi Anthathi by Divya Kavi Pillai Perumal Aiyangar.[2]

The temple follows the traditions of the Thenkalai sect of Vaishnavite tradition and follows Vaikanasa aagama. In modern times, the temple priests perform the pooja (rituals) during festivals and on a daily basis. As at other Vishnu temples of Tamil Nadu, the priests belong to the Vaishnavaite community, a Brahmin sub-caste. Six daily rituals are held at various times of the day and many yearly festivals are held at the temple, of which the float festival during the Tamil month of Masi (February–March), Navrathri during September–October and Vaikunta Ekadasi during Margazhi (December–January) being the most prominent. There are weekly, monthly and fortnightly rituals performed in the temple.[2]

Every year during the Tamil month of Chithirai, Chithirai Thiruvizha is celebrated. Chithirai Thiruvizha is an yearly event of the marriage of Meenakshi, believed to be Azhagar's sister. The first 15 days of the event is celebrated in Madurai for the arrangements between Meenakshi and Sundareswarar, while the next 15 days is about Azhagar making preparations for her marriage. The main event is Kallazhagar crossing the Vaigai river. Millions of people gather in Madurai to witness this event. While Kallazhagar enters the river, he comes to know that his sister's marriage is already over, he returns to Karuparayar Mandapam and then he takes ten avathars and finally returns to Azhagar Kovil. This temple obtained a new Car, after 300 years, built with a team of 15 artisans using vengai tree wood for the structure and Burma teakwood for sculptures. The trial run was held on 6 July 2015.[5]