For the Greek god who was patron deity of this river, see Meander (mythology)

The Büyük Menderes River (historically the Maeander or Meander, from Ancient Greek: Μαίανδρος, Maíandros; Turkish: Büyük Menderes Irmağı), is a river in southwestern Turkey. It rises in west central Turkey near Dinar before flowing west through the Büyük Menderes graben until reaching the Aegean Sea in the proximity of the ancient Ionian city Miletus. The word "meander" is used to describe a winding pattern, after the river.

The river rises in a spring near Dinar and flows to Lake Işıklı. After passing the Adıgüzel Dam and the Cindere Dam, the river flows past Nazilli, Aydın and Söke before it drains into the Aegean Sea.

The Maeander was a celebrated river of Caria in Asia Minor. It appears earliest in the Catalog of Trojans of Homer's Iliad along with Miletus and Mycale.

The river has its sources not far from Celaenae in Phrygia (now Dinar),[1] where it gushed forth in a park of Cyrus.[2] According to some[3] its sources were the same as those of the river Marsyas; but this is irreconcilable with Xenophon, according to whom the sources of the two rivers were only near each other, the Marsyas rising in a royal palace.[4] Others[5] state that the Maeander flowed out of a lake on Mount Aulocrene. William Martin Leake[6] reconciles all these apparently different statements by the remark that both the Maeander and the Marsyas have their origin in the lake on Mount Aulocrene, above Celaenae, but that they issue at different parts of the mountain below the lake. 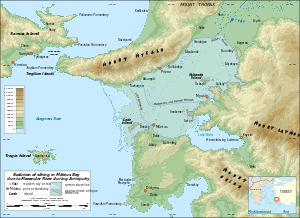 Map of the river's mouth and the evolution of silting of Miletus Bay during Antiquity.

The Maeander was so celebrated in antiquity for its numerous windings, that its classical name "Maeander" became, and still is, proverbial.[7] Its whole course has a southwesterly direction on the south of the range of Mount Messogis. South of Tripolis it receives the waters of the Lycus, whereby it becomes a river of some importance. Near Carura it passes from Phrygia into Caria, where it flows in its tortuous course through the Maeandrian plain,[8] and finally discharges itself in the Gulf of Icaros (an arm of the Aegean Sea), between Priene and Myus, opposite to the Ionian city of Miletus, from which its mouth is only 10 stadia distant.[9]

The Maeander is a deep river,[10] but not very broad. In many parts its depth equals its breadth and, so, it is navigable only by small craft.[11] It frequently overflows its banks and, as a result of the quantity of mud it deposits at its mouth, the coast has been pushed about 20 or 30 stadia further into the sea and several small islands off the coast have become united with the mainland.[12]

There was a legend about a subterranean connection between the Maeander and the Alpheus River in Elis.[13]