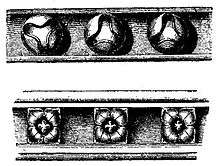 The ball-flower (also written ballflower) is an architectural ornament in the form of a ball inserted in the cup of a flower, which came into use in the latter part of the 13th, and was in great vogue in the early part of the 14th century.[1] It is generally placed in rows at equal distances in the hollow of a moulding, frequently by the sides of mullions. The earliest known is said to be in the west part of Salisbury Cathedral, where it is mixed with the tooth ornament. It seems to have been used more and more frequently, till at Gloucester Cathedral, in the south side, it is in profusion.[2]