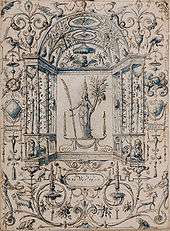 Mannerist grotesque ornament drawing by the Dutch painter and architect Hans Vredeman de Vries (1527–1609), of around 1604. The figures of the fauns at bottom, and almost the dragons at top, are moresques.

Moresque is an obsolete alternative term to "Moorish" in English, and in the arts has some specific meanings. By itself the word is used of forms found in ornament and decoration in the applied arts in Europe. Often it is a synonym for arabesque or interlace patterns in the Mannerist and Northern Mannerist styles of the 16th century, derived from Islamic ornament. It was defined in 1611 by Randle Cotgrave's A Dictionarie of the French and English Tongues as: "a rude or anticke painting, or carving, wherin the feet and tayles of beasts, &c, are intermingled with, or made to resemble, a kind of wild leaves, &c." [1] The word is also used for such a figure, starting off as a human or animal, but terminating as part of a decorative scheme of foliage or geometric strapwork.

In fact the origin of figures like those described by Cotgrave comes not from the Islamic world, but from the Renaissance version, influenced by the Ancient Roman grotesque decorative style, of medieval ornament, especially that found in illuminated manuscripts. Here men and beasts whose forms disappear into geometric or foliage decoration go back almost a thousand years to the interlace of Insular art seen in the Book of Kells and other manuscripts. These themselves derive from the Animal style of barbarian Europe. However the term "moresque" is not used of these medieval versions.