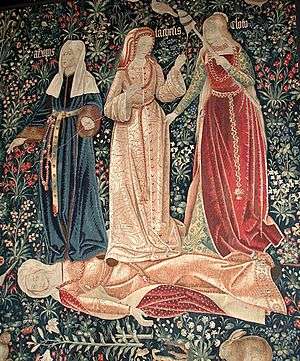 Tapestry "The Triumph of Death, or the Three Fates" with a typical mille-fleurs background, Flemish, c. 1510-20. 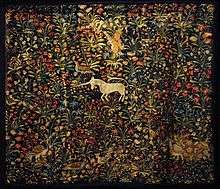 Millefleur, millefleurs or mille-fleur (French mille-fleurs, literally "thousand flowers") refers to a background style of many different small flowers and plants, usually shown on a green ground, as though growing in grass. It is essentially restricted to European tapestry during the late Middle Ages and Early Renaissance, from about 1400 to 1550, but mainly about 1480-1520. The style had a notable revival by Morris & Co in 19th century England, being used on original tapestry designs, as well as illustrations from his Kelmscott Press publications. The millefleur style differs from many other styles of floral decoration, such as the arabesque, in that many different sorts of individual plants are shown, and there is no regular pattern. The plants fill the field without connecting or significantly overlapping. In that it also differs from the plant and floral decoration of Gothic page borders in illuminated manuscripts.

There is also a rather different style known as millefleur in Indian carpets from about 1650 to 1800.

In the millefleur style the plants are dispersed across the field on a green background representing grass, to give the impression of a flowery meadow, and cover evenly the whole decorated field. At the time they were called verdures in French. They are mostly flowering plants shown as a whole, and in flower. Many are recognizable as specific species, with varying degrees of realism, but accuracy does not seem to be the point of the depiction. There are very often animals and sometimes human figures dispersed around the field, often rather small in relation to the plants, and at a similar size to each other, whatever their relative sizes in reality.

The tapestries usually include large figures whose meaning is not always apparent, which seems to derive from the division of labour under the guild system, so that the weavers were obliged to repeat figure designs by members of the painters' guild, but could design the backgrounds themselves. Such was the case in Brussels at any rate, after a lawsuit between the two groups in 1476.[1] The subjects are generally secular, but there are some religious survivals.[2]

Millefleur style was most popular in late 15th and early 16th century French and Flemish tapestry, with the best known examples including The Lady and the Unicorn and The Hunt of the Unicorn. These are from what has been called the "classic" period, where each "bouquet" or plant is individually designed, improvised by the weavers as they worked, while later tapestries, probably mostly made in Brussels, usually have mirror images of plants on the right and left sides of the piece, suggesting a cartoon re-used twice. The precise origin of the pieces has been much argued about, but the only surviving example whose original payment can be traced was a large heraldic millefleur carpet made for Duke Charles the Bold of Burgundy in Brussels, part of which is now in the Bern Historical Museum.[3]

The beginnings of the style may be seen in earlier tapestries. The famous Apocalypse Tapestry series (Paris, 1377–82) has several backgrounds covered in vegetal motifs, but these are springing from tendrils in the way of illuminated manuscript borders. In fact most of the very large sets do not fully use the style, with the meadow of flowers extending right to the top of the picture space. The early Devonshire Hunting Tapestries (1420s) have naturalistic landscape backgrounds, seen from a somewhat elevated viewpoint, so that the lower two-thirds or so of each scene has a millefleur background, but this gives way to forest or sea and sky at the top of the tapestry. The The Justice of Trajan and Herkinbald (about 1450) and most of The Hunt of the Unicorn set (about 1500) are similar. From the main period, each tapestry in the The Lady and the Unicorn set has three distinct zones of millefleur background: the island containing the figures, where the plants are densely arranged, an upper background zone where they are arranged in vertical bands, and accompany animals at very varied scales, and a lower zone where a single row of plants have slight gaps between them.

During the 1800s, the millefleur style was revived and incorporated into numerous tapestry designs by Morris & Co. The company's Pomona (1885) and The Achievement of the Grail (1895-96) tapestries demonstrate an adherence to the medieval millefleur style. Other tapestries such as their The Adoration of the Magi (1890) and The Failure of Sir Gawain (c.1890s) use the style more liberally, borrowing the flowers' often flat, splayed appearance, but overlapping them and using them as part of a landscape and not as a purely decorative backdrop. The Adoration of the Magi was one of the company's most popular designs, with ten versions woven between 1890-1907.

The term is also used to describe north Indian carpets, originally of the late Mughal era in the late 17th and 18th century. However these have large numbers of small flowers in repeating units, often either springing unrealistically from long-ranging twisting stems, or arranged geometrically in repeating bunches or clusters. In this they are essentially different from the irregularly arranged whole plant style of European tapestries, and closer to arabesque styles. The flowers springing from the same stem may be of completely different colours and types. There are two broad groups, one directional and more likely to show whole plants (an early version is the upper illustration), and one not directional and often just showing stems and flowers.[4]

They appear to have been manufactured in Kashmir and modern Pakistan. They reflect a combination of European influences and underlying Persian-Mughal decorative tradition, and a trend for smaller elements in designs.[5] The style, or styles, were later adopted by Persian weavers, especially for prayer rugs, up to about 1900.

Millefiori decoration uses the Italian version of the same word, but is a different style, restricted to glass. 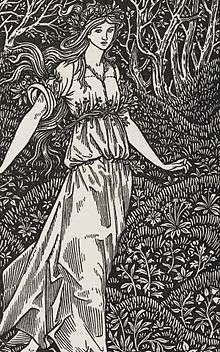 Sir Edward Burne-Jones' frontispiece to The Wood Beyond the Worlds (Kelmscott Press, 1894)

The millefleur style is sometimes used liberally in Sir Edward Burne-Jones' illustrations for the Kelmscott Press publications, such in as his frontispiece to The Wood Beyond the World (1894).

Millefleur are used in artist Leon Coward's mural The Happy Garden of Life which appeared in the 2016 sci-fi movie 2BR02B: To Be or Naught to Be. The flowers in the mural were adapted and redesigned from those in The Unicorn in Captivity from The Hunt of the Unicorn tapestry series, as part of the mural's religious allusions.[6]