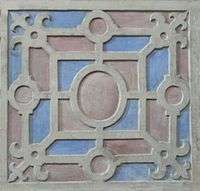 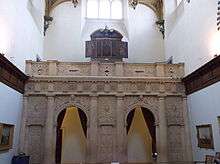 The stone screen in the hall at Wollaton Hall outside Nottingham 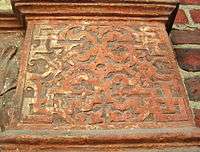 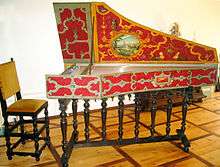 Modern reproduction harpsichord uses bandwork or strapwork motifs based on a Flemish book of 1579, mixed in with grotesque elements. 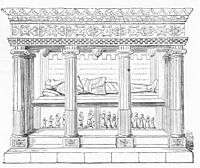 In the history of art and design, strapwork is a stylised representation in ornament of leather straps,[1] consisting of flattened strips or bands of curling leather, parchment or metal cut into elaborate shapes, with piercings, and often interwoven in a geometric pattern.

Strapwork is a frequent element of grotesques — arabesque or candelabra figures filled with fantastical creatures, garlands and other elements—which were a frequent decorative motif in 16th-century Mannerism, and revived in the 19th century and which may appear on walls—painted, in frescos, carved in wood, or moulded in plaster or stucco — or in graphic work.[2]

Strapwork became popular in England in the late 16th and 17th centuries as a form of plasterwork decorative moulding used particularly on ceilings, but also sculpted in stone for example around entrance doors, as at Misarden Park (1620), Gloucestershire, or on monumental sculpture, as on the frieze of the monument to Sir John Newton (d.1568), at East Harptree, Gloucestershire, and on that of Sir Gawen Carew (d.1575) in Exeter Cathedral. Wollaton Hall outside Nottingham makes especially extensive, and for some excessive, use of strapwork inside and out. 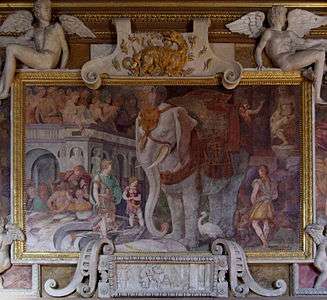 French stucco strapwork (top and bottom) by Rosso Fiorentino in the Palace of Fontainebleau, 1530s

Strapwork was found earlier, but really came to prominence after it was used in stucco in the enormous elaborate decorative frames designed by Rosso Fiorentino for the Palace of Fontainebleau in the 1530s. Thereafter, spread by prints, it became part of the vocabulary of Northern Mannerist ornament. Where there is no suggestion of three dimensions — curling ends and the like — the decoration may also be called bandwork or "interlaced bands", the more technically correct term. Peter Fuhring derives this style from Islamic ornament.[3] 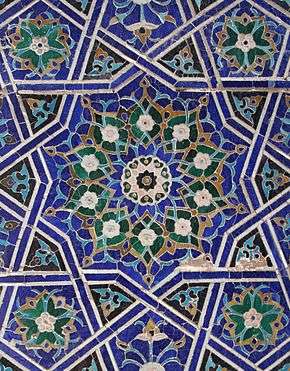