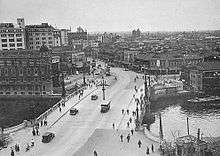 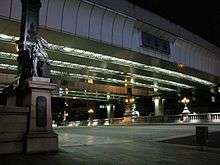 Chūō (中央区, Chūō-ku, "Central Ward") is a special ward that forms part of the heart of Tokyo, Japan. The ward refers to itself in English as Chūō City.

Its Japanese name literally means "Central Ward", and it is historically the main commercial center of Tokyo, although Shinjuku has risen to challenge it since the end of World War II. The most famous district in Chūō is Ginza, built on the site of a former silver mint from which it takes its name. The gold mint, or Kinza (金座), formerly occupied the site of the present-day Bank of Japan headquarters building, also in Chūō.

As of May 1, 2015, the ward has an estimated resident population of 141,454 and a population density of 13,850 persons per km². The total area is 10.21 km². However, because of the concentration of businesses, offices and retail space, the daytime population swells to an estimated 650,000.

Chūō is in the central area of Tokyo, surrounded by the five special wards of Chiyoda, Minato, Taitō, Sumida, and Kōtō.

Administratively, Chūō is divided into the three zones of Nihonbashi, Kyobashi and Tsukishima. Nihonbashi and Kyobashi are predominantly commercial areas on the east side of Tokyo Station, and incorporate the famous districts of Ginza and Tsukiji. Tsukishima is a separate island in Tokyo Bay dominated by condominium towers.

Until World War II, the area was criscrossed by small rivers and canals, used by small boats which were the primary vehicles of commerce at the time. After the war, many of these waterways were filled in to make way for new roads, buildings and expressways. However, the former waterways are the basis for many of the neighborhood divisions in the ward. The Sumida River forms the eastern boundary of the ward.

Chūō is physically the second-smallest ward in Tokyo, with a total area of just 10.15 km²; only Taitō is smaller. 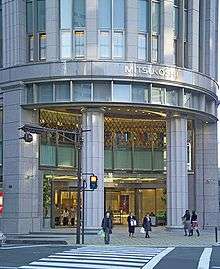 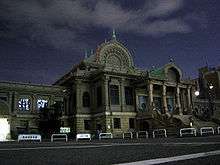 IBM has its Japan headquarters in Chūō.[24]

In the late 1990s GeoCities Japan was headquartered in the Nihonbashi Hakozaki Building in Nihonbashi.[26]

Tokyopop maintained its Japanese headquarters in Mid-Tower of the Tokyo Towers.[27]

Chuo is run by a city assembly of 30 elected members. The current mayor is Yoshihide Yada, an independent backed Liberal Democratic Party and Komeito.

For more details on this topic, see Transportation in Greater Tokyo.