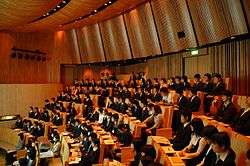 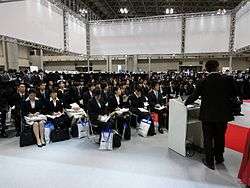 In Japan, most students hunt for jobs before graduation from university or high school, seeking "informal offers of employment" (内々定, nainaitei) one year before graduation, which will hopefully lead to "formal offer of employment" (内定, naitei) six months later, securing them a promise of employment by the time they graduate. Japanese university students generally begin job hunting all at once in their third year. The government permits companies to begin the selection process and give out informal offers beginning April 1, at the start of the fourth year. These jobs are mainly set to begin on April 1 of the following year. Due to this process, attaining a good position as a regular employee at any other time of year, or any later in life, is extremely difficult.

Since companies prefer to hire new graduates, students who are unsuccessful in attaining a job offer upon graduating often opt to stay in school for another year. According to a survey conducted by Mynavi, nearly 80% of job-seekers who had recently graduated from university had difficulty applying for entry-level positions in Japan.[2] This is in contrast to other countries, where companies do not generally discriminate against those who have recently graduated.

By contrast, potential employees in Japan are largely judged by their educational background. The prestige of the university and high school that a student attends has a marked effect on their ability to find similarly sought-after jobs as adults.

Large companies in particular (e.g. those listed in Nikkei 225), prefer to hire new graduates of prestigious universities "in bulk" to replace retiring workers and groom in-house talent, and the numbers can vary widely from year to year. Employers tend to hire a group of people in a mechanical fashion every year. One example is Toyota; the company hired over 1,500 new graduates in 2010, but this number was barely half of the number employed the year before, and Toyota announced its intention to cut new hires in 2011 further down to 1,200. The company may offer more jobs later on, but those who missed out on the current round of hiring will have a slim chance of gaining a position because they will be overshadowed by fresh graduates.

This practice leaves thousands of young Japanese sidelined in extended studies, part-time jobs, or on unemployment benefits instead of fully participating in the domestic economy and contributes to producing a great number of freeters and neets in Japan.

According to the nonprofit group Lifelink's survey conducted in July, 2013, one in five Japanese college students thought about committing suicide during the job-hunting process.

This custom has been seen to cause many social problems in modern Japan. Students who do not reach a decision about their employment before graduating from university often face great hardships searching for a job after the fact, as the majority of Japanese companies prefer to hire students scheduled to graduate in the spring. In recent years, an increasing number of university seniors looking for jobs have chosen to repeat a year to avoid being placed in the "previous graduate" category by companies. Under the current system, Japanese companies penalize students who study overseas or have already graduated.

Reiko Kosugi, a research director at the Japan Institute for Labor Policy and Training, criticized this process in a 2006 essay in The Asia-Pacific Journal, saying, "If business is in a slump at the point of one's graduation and he cannot get a job, this custom produces inequality of opportunity, and people in this age bracket tend to remain unemployed for a long time."[3] Nagoya University professor Mitsuru Wakabayashi has stated, "If this custom is joined to permanent employment, it produces closed markets of employment, where outplacement is hard, and the employees tend to obey any and all unreasonable demands made by their companies so as not to be fired.",[4] and Yuki Honda, a professor at the University of Tokyo's Graduate School of Education, has said "Whether they get a job when they graduate decides their whole life". Ken Mogi, a Japanese brain scientist, points out that limiting job opportunities would lead to a human rights issue and that Japanese companies cannot secure non-traditional competent people in the current job hunting system.[5]

Japan ranks at the bottom of the 19 OECD countries regarding freedom of choice in life.[6]