Boggart is one of numerous related terms used in English folklore for either a household spirit or a malevolent genius loci inhabiting fields, marshes or other topographical features. Other names of this group include bug, bugbear, bogey, bogeyman, bogle, etc., presumably all derived from (or related to) Old English pūcel, Irish púca and Welsh bwg with the same meaning (itself a probable loan from the English bug).[1]

The household form causes mischief and things to disappear, milk to sour, and dogs to go lame. The boggarts inhabiting marshes or holes in the ground are often attributed more serious evil doing, such as the abduction of children.

Always malevolent, the household boggart will follow its family wherever they flee. It is said that the boggart crawls into people's beds at night and puts a clammy hand on their faces. Sometimes he strips the bedsheets off them.[2] Sometimes a boggart will also pull on a person's ears. Hanging a horseshoe on the door of a house and leaving a pile of salt outside your bedroom are said to keep a boggart away.

In some areas, Northumberland for example, it was believed that helpful household sprites, "silkies" or "brownies", could turn into malevolent boggarts if offended or ill-treated.[3]

In Northern England, at least, there was the belief that the boggart should never be named, for when the boggart was given a name, it would not be reasoned with nor persuaded, but would become uncontrollable and destructive. Within the folklore of North-West England, boggarts can cause mischief in homes but tend to live outdoors, in marshland, holes in the ground, under bridges and on dangerous sharp bends on roads. The book Lancashire Folklore of 1867, makes a distinction between "House boggarts" and other types.[4] In Lancashire a skittish or runaway horse was said to have "took boggarts" - that is, been frightened by a, usually invisible, boggart. When a person got lost in a marsh and was never seen again, the people were sure that a boggart had caught the poor unfortunate and devoured him.[5] The name of at least one Lancashire boggart was recorded, "Nut-Nan", who flitted with a shrill scream among hazel bushes in Moston near Manchester.[6] In Yorkshire boggarts also inhabit outdoor locations, one is said to haunt Cave Ha, a limestone cavern at Giggleswick near Settle.[7]

The Scots variant is the bogle (or boggle).

The recorded folklore of Boggarts is remarkably varied as to their appearance and size. Many are described as relatively human-like in form, though usually uncouth, very ugly and often with bestial attributes. One such boggart was "a squat hairy man, strong as a six year old horse, and with arms almost as long as tacklepoles".[8] Other accounts give a more completely beast-like form. The "Boggart of Longar Hede" from Yorkshire was said to be a fearsome creature the size of a calf, with long shaggy hair and eyes like saucers. It trailed a long chain after itself, which made a noise like the baying of hounds.[9] The "Boggart of Hackensall Hall" in Lancashire had the appearance of a huge horse.[10] At least one Lancashire boggart could take the form of various animals, or indeed more fearful creatures.[11]

The boggarts of Lancashire were said to have a leader, or master, called 'Owd Hob', who had the form of a satyr or archetypical devil: horns, cloven hooves and a tail.[12]

A piece of folklore concerning a Lancashire boggart was published in 1861; the author had a conversation with an elderly couple one evening about their local boggart. They maintained that the boggart was buried at a nearby bend in the road under an ash tree, along with a cockerel with a stake driven through it. Despite being buried, the boggart was still able to create trouble. A farmer's wife, the old couple claimed, just two weeks earlier had heard doors banging in her farmhouse at night, then loud laughter, she looked out to see three candles casting blue light and a creature with red burning eyes leaping about. The following morning many marks of cloven hooves were seen outside the house. The couple claimed that the boggart had unhitched their own horse and overturned their cart on occasion. "Never name it [the boggart]" the old man repeated, and stated that he would never dig near its grave.[13]

The Farmer and the Boggart

In one old tale said to originate from the village of Mumby in the Lincolnshire countryside, the boggart is described as being rather squat, hairy and smelly. The story goes that a farmer bought a patch of land that was inhabited by the boggart. When the farmer tried to cultivate the field the boggart got angry, but after much arguing they decided to work the land together and share the bounty. The clever farmer however, began to ponder a way to cheat the boggart out of his share. When they were debating what to plant, he asked the boggart, "Which half of the crop do you want for your share, the part below the ground or the part above it?" The boggart thought for a while before answering "The part below the ground". The farmer sowed the field with barley. At harvest time the farmer boasted a big pile of barley while all the boggart had to show for his work was stubble. It flew into a rage and screeched that next time it would take what lay above the ground. The next time the farmer sowed the field with potatoes. At harvest time the farmer laughed as he claimed his massive pile of potatoes while the boggart was yet again left with nothing to show for his efforts. Simmering with rage, the boggart stormed off, never to return again.[14]

This story is identical to the European fable The Farmer and the Devil, cited in many 17th-century French works. (See Bonne Continuation, Nina M. Furry et Hannelore Jarausch) 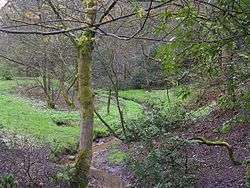 A variety of geographic locations and architectural landmarks have been named for the boggart.

There is a large municipal park called Boggart Hole Clough, which is bordered by Moston and Blackley in Manchester, England. Clough is a northern dialect word for a steep-sided, wooded valley; a large part of Boggart Hole Clough is made up of these valleys and is said to be inhabited by boggarts.[15] Supposed mysterious disappearances over the years, particularly in the early 19th century, were often attributed to the Boggart of the Clough.

There is a Boggart Bridge in Burnley, Lancashire, where tradition says that whoever crosses the bridge must give a living thing to the boggart or forfeit his or her soul.

Boggarts Roaring Holes are a group of potholes on the moors of Newby Moss near Clapham in the Yorkshire Dales. Legend has it that these potholes are the dwelling place of grotesque flesh-eating boggarts whose angry growls have allegedly been heard reverberating from the depths of the dark caverns beneath (hence the name).

Halfway between Scarborough and Whitby, on Robin Hood's Bay, there is a place called Boggle Hole. In the local mythology, a boggle is the local name for a hobgoblin, mischievous "little people" who were thought to live in caves along the coast. Boggle Hole is a natural cave formed by wave action where smugglers used to land their contraband in past times.

On Puck, a moon of Uranus, there is a crater named Bogle, in deference to the system of nomenclature on this satellite, whose features are all named after various mischievous spirits.

Boggarts feature prominently in a number of popular fantasy novels, in various incarnations. These include the "boggles" of C. S. Lewis's Chronicles of Narnia, the boggart of Susan Cooper's The Boggart and The Boggart and the Monster, the boggart in the Septimus Heap series, the boggarts in Joseph Delaney's The Wardstone Chronicles, and the boggar in William Mayne's Earthfasts. Other books, including The Spiderwick Chronicles, Tasha Tudor's Corgi-related picture books, and Mark Del Franco's Convergent World books feature brownies which turn into boggarts when angered.

The boggarts of J. K. Rowling's Harry Potter series are shape-shifters whose true form is unknown, unlike most boggarts of British folklore. Their closest parallel, in being able to change shape at will, is probably to be found in a reference to a Lancashire boggart in the book Lancashire Folklore of 1867.[16]

In the 2014 fantasy film Seventh Son an enormous malevolent boggart attacks the protagonists while they're on their journey to find the antagonist character. Boggarts also appear in the film's original source material, The Spook's Apprentice.

In the CITV children's show The Treacle People, boggarts are furry, gremlin-like creatures that originate from the Treacle Mines. They are mischievous, frequently playfighting and causing a mess. They serve as pets, friends and pests to the townspeople. They have the ability to walk up walls and other inclined surfaces due to their feet, which resemble plungers.