This article is about the mythological creature. For other uses, see Ogre (disambiguation).
"Ogress" redirects here. For the heraldic term, see Roundel (heraldry). 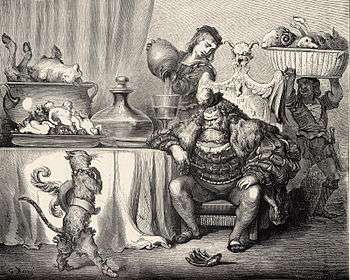 Puss in Boots before the ogre. One of the platters on the table serves human babies (Illustrated by Gustave Doré).

An ogre (feminine ogress) is a legendary monster usually depicted as a large, hideous, manlike being that eats ordinary human beings, especially infants and children. Ogres frequently feature in mythology, folklore, and fiction throughout the world. They appear in many classic works of literature, and are most often associated in fairy tales and legend with a taste for infants.

In mythology, ogres are often depicted as inhumanly large and tall and having a disproportionately large head, abundant hair, unusually colored skin, a voracious appetite, and a strong body. Ogres are closely linked with giants and with human cannibals in mythology. In both folklore and fiction, giants are often given ogrish traits (such as the giants in "Jack and the Beanstalk" and "Jack the Giant Killer", the Giant Despair in The Pilgrim's Progress, and the jötnar of Norse mythology); while ogres may be given giantish traits.

Famous examples of ogres in folklore include the ogre in Puss and Boots and the ogre in "Hop-o'-My-Thumb"; and in fiction, Shrek and Fiona from Shrek. Other characters sometimes described as ogres include the title character from "Bluebeard", the Beast from "Beauty and the Beast", Grendel from "Beowulf", Polyphemus the Cyclops from Homer's Odyssey, the cyclops in "Sinbad the Sailor", and the oni of Japanese folklore. 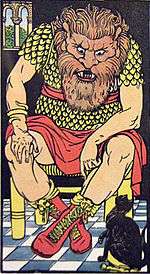 Puss in Boots before the ogre. (Illustrated by Walter Crane.)

The word ogre is of French origin, originally derived from the name of the Etruscan god Orcus, who fed on human flesh. Its earliest attestation is in Chrétien de Troyes' late 12th-century verse romance Perceval, li contes del graal, which contains the lines:

"And it is written that he will come again,
to all the realms of Logres,
known as the land of ogres,
and destroy them with that lance."

The ogres in this rhyme may refer to the ogres who, in the pseudohistorical work History of the Kings of Britain by Geoffrey of Monmouth, were the inhabitants of Britain prior to human settlement. despite that ogres still feature prominently in Cornish Folklore. Ogre could possibly derive from the biblical Og, last of the giants (or from the Greek river god Oiagros, father of Orpheus). 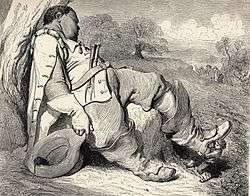 The word ogre came into wider usage in the works of Charles Perrault (1628–1703) or Marie-Catherine Jumelle de Berneville, Comtesse d' Aulnoy (1650–1705), both of whom were French authors. Other sources say that the name is derived from the word Hongrois, which means Hungarian, as of western cultures referred to Hungarians as a kind of monstrosity.[1] The word ogre is thought to have been popularized by the works of Italian author Giambattista Basile (1575–1632), who used the Neapolitan word uerco, or in standard Italian, orco. This word is documented[2] in earlier Italian works (Fazio degli Uberti, 14th century; Luigi Pulci, 15th century; Ludovico Ariosto, 15th–16th centuries) and has even older cognates with the Latin orcus and the Old English orcnēas found in Beowulf lines 112–113, which inspired J.R.R. Tolkien's Orc.[3] All these words may derive from a shared Indo-European mythological concept (as Tolkien himself speculated, as cited by Tom Shippey, The Road to Middle-earth, 45). Some see the French myth of the ogre as being inspired by the real-life crimes of Gilles de Rais.[4]

The first appearance of the word ogre in Perrault's work occurred in his Histoires ou Contes du temps Passé (1696). It later appeared in several of his other fairy tales, many of which were based on the Neapolitan tales of Basile. The first example of a female ogre being referred to as an ogress is found in his version of Sleeping Beauty, where it is spelled ogresse. Madame d'Aulnoy first employed the word ogre in her story L'Orangier et l'Abeille (1698), and was the first to use the word ogree to refer to the creature's offspring.