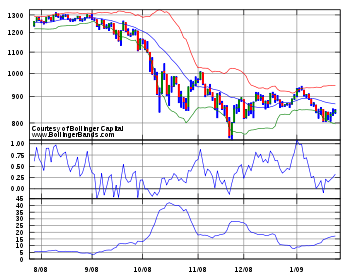 S&P 500 with 20-day, two-standard-deviation Bollinger Bands, %b and bandwidth.

Bollinger Bands is a tool invented by John Bollinger in the 1980s as well as a term trademarked by him in 2011.[1] Having evolved from the concept of trading bands, Bollinger Bands and the related indicators %b and bandwidth can be used to measure the "highness" or "lowness" of the price relative to previous trades. Bollinger Bands are a volatility indicator similar to the Keltner channel.

Typical values for N and K are 20 and 2, respectively. The default choice for the average is a simple moving average, but other types of averages can be employed as needed. Exponential moving averages is a common second choice.[note 1] Usually the same period is used for both the middle band and the calculation of standard deviation.[note 2]

The purpose of Bollinger Bands is to provide a relative definition of high and low. By definition, prices are high at the upper band and low at the lower band. This definition can aid in rigorous pattern recognition and is useful in comparing price action to the action of indicators to arrive at systematic trading decisions.[3]

Bandwidth tells how wide the Bollinger Bands are on a normalized basis. Writing the same symbols as before, and middleBB for the moving average, or middle Bollinger Band:

Using the default parameters of a 20-period look back and plus/minus two standard deviations, bandwidth is equal to four times the 20-period coefficient of variation.

Uses for %b include system building and pattern recognition. Uses for bandwidth include identification of opportunities arising from relative extremes in volatility and trend identification.

Various studies of the effectiveness of the Bollinger Band strategy have been performed with mixed results. In 2007 Lento et al. published an analysis using a variety of formats (different moving average timescales, and standard deviation ranges) and markets (e.g., Dow Jones and Forex).[6] Analysis of the trades, spanning a decade from 1995 onwards, found no evidence of consistent performance over the standard "buy and hold" approach. The authors did, however, find that a simple reversal of the strategy ("contrarian Bollinger Band") produced positive returns in a variety of markets.

Similar results were found in another study, which concluded that Bollinger Band trading strategies may be effective in the Chinese marketplace, stating: "Finally, we find significant positive returns on buy trades generated by the contrarian version of the moving-average crossover rule, the channel breakout rule, and the Bollinger Band trading rule, after accounting for transaction costs of 0.50 percent."[7] (By "the contrarian version", they mean buying when the conventional rule mandates selling, and vice versa.) A recent study examined the application of Bollinger Band trading strategies combined with the ADX for Equity Market indices with similar results.[8]

A paper from 2008 uses Bollinger Bands in forecasting the yield curve.[9]

Companies like Forbes suggest that the use of Bollinger Bands is a simple and often an effective strategy but stop-loss orders should be used to mitigate losses from market pressure.[10]

Security price returns have no known statistical distribution, normal or otherwise; they are known to have fat tails, compared to a normal distribution.[11] The sample size typically used, 20, is too small for conclusions derived from statistical techniques like the central limit theorem to be reliable. Such techniques usually require the sample to be independent and identically distributed, which is not the case for a time series like security prices. Just the opposite is true; it is well recognized by practitioners that such price series are very commonly serially correlated—that is, each price will be closely related to its ancestor "most of the time". Adjusting for serial correlation is the purpose of moving standard deviations, which use deviations from the moving average, but the possibility remains of high order price autocorrelation not accounted for by simple differencing from the moving average.

For such reasons, it is incorrect to assume that the long-term percentage of the data that will be observed in the future outside the Bollinger Bands range will always be constrained to a certain amount. Instead of finding about 95% of the data inside the bands, as would be the expectation with the default parameters if the data were normally distributed, studies have found that only about 88% of security prices (85%-90%) remain within the bands.[12] For an individual security, one can always find factors for which certain percentages of data are contained by the factor defined bands for a certain period of time. Practitioners may also use related measures such as the Keltner channels, or the related Stoller average range channels, which base their band widths on different measures of price volatility, such as the difference between daily high and low prices, rather than on standard deviation.

Bollinger bands outside of finance

The International Civil Aviation Organization is using Bollinger bands to measure the accident rate as a safety indicator to measure efficiency of global safety initiatives.[14] %b and bandwidth are also used in this analysis.