In technical analysis, support and resistance is a concept that the movement of the price of a security will tend to stop and reverse at certain predetermined price levels.[1] These levels are denoted by multiple touches of price without a breakthrough of the level.

A support level is a level where the price tends to find support as it falls. This means the price is more likely to "bounce" off this level rather than break through it. However, once the price has breached this level, by an amount exceeding some noise, it is likely to continue falling until meeting another support level.[2]

A resistance level is the opposite of a support level. It is where the price tends to find resistance as it rises. This means the price is more likely to "bounce" off this level rather than break through it. However, once the price has breached this level, by an amount exceeding some noise, it is likely to continue rising until meeting another resistance level.

Reactive vs Proactive support and resistance

Proactive support and resistance methods are 'predictive' in that they often outline areas where price has not actually been.[3] They are based upon current price action that through analysis has been shown to be predictive of future price action. Proactive support and resistance methods include Measured Moves, Swing Ratio Projection/Confluence (Static (Square of Nine), Dynamic (Fibonacci)), Calculated Pivots, Volatility Based, Trendlines and Moving averages, VWAP, Market Profile (VAH, VAL and POC).[3]

Reactive support and resistance are the opposite: they are formed directly as a result of price action or volume behaviour. They include Volume Profile, Price Swing lows/highs, Initial Balance, Open Gaps, certain Candle Patterns (e.g. Engulfing, Tweezers) and OHLC.[3]

A price histogram is useful in showing at what price a market has spent more relative time. Psychological levels near round numbers often serve as support and resistance.[3]

Support and resistance levels can be identified by trend lines (technical analysis).[4] Some traders believe in using pivot point calculations.[5]

The more often a support/resistance level is "tested" (touched and bounced off by price), the more significance given to that specific level.[6]

Psychological Support and Resistance levels form an important part of a trader's technical analysis.[8] As price reaches a value ending in 50 (ex. 1.2050) or 00 (ex. 1.3000), humans often see these levels as a strong potential for interruption in the current movement. The price may hit the line and reverse, it could hover around the level as Bulls and Bears fought for supremacy, or it may punch straight through. A trader should always exercise caution when approaching 00 levels in general and 50 levels if it has previously acted as Support or Resistance.

This is an example of support switching roles with resistance, and vice versa: 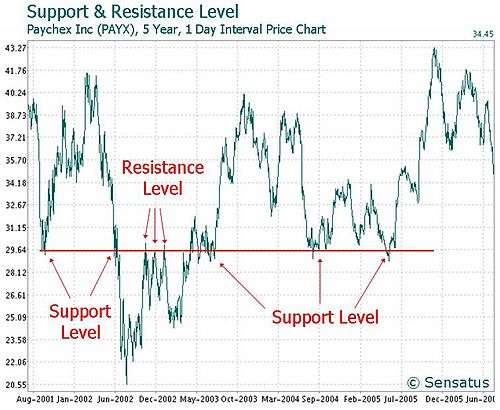 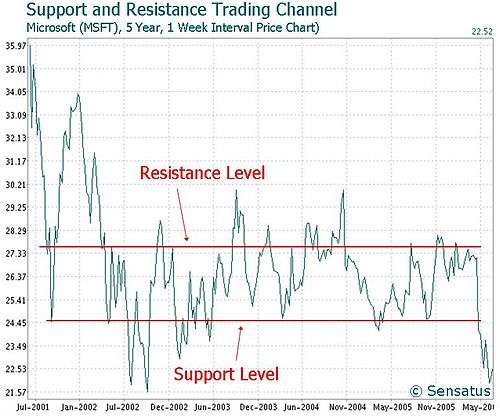 When judging entry and exit investment timing using support or resistance levels it is important to choose a chart based on a price interval period that aligns with your trading strategy timeframe. Short term traders tend to use charts based on interval periods, such as 1 minute (i.e. the price of the security is plotted on the chart every 1 minute), with longer term traders using price charts based on hourly, daily, weekly or monthly interval periods. Typically traders use shorter term interval charts when making a final decisions on when to invest, such as the following example based on 1 week of historical data with price plotted every 15 minutes. In this example the early signs that the stock was coming out of a downtrend was when it started to form support at $30.48 and then started to form higher highs and higher lows signalling a change from negative to positive trending. 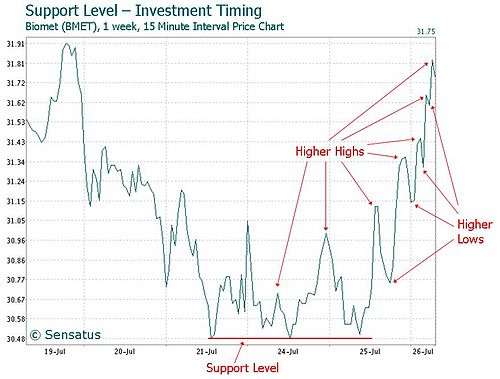