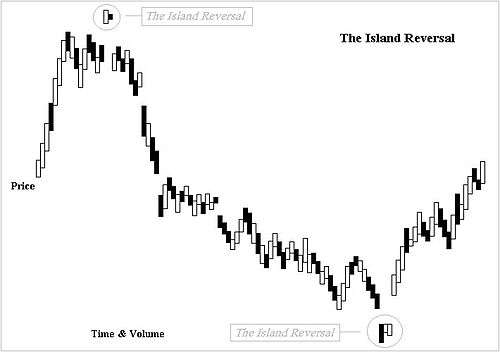 In stock trading and technical analysis, an island reversal is a candlestick pattern with compact trading activity within a range of prices, separated from the move preceding it. This separation is said to be caused by an exhaustion gap and the subsequent move in the opposite direction occurs as a result of a breakaway gap.

An example of a bearish island reversal pattern was identified by Kenneth Gruneisen and published via CANSLIM.net when ITT Educational Services (ESI) topped in January 2009. ESI fell from $120 to $12 in the 4 years that followed. http://premium.canslim.net/CSNNews/templates/OPENARCHIVES.aspx?a=16266

This article is issued from Wikipedia - version of the 11/4/2014. The text is available under the Creative Commons Attribution/Share Alike but additional terms may apply for the media files.