Vindhya Pradesh was a former state of India. It occupied an area of 23,603 sq. miles.[1] It was created in 1948, shortly after Indian independence, from the territories of the princely states in the eastern portion of the former Central India Agency. It was named for the Vindhya Range, which runs through the centre of the province. The capital of the state was Rewa. It lay between Uttar Pradesh to the north and Madhya Pradesh to the south, and the enclave of Datia, which lay a short distance to the west, was surrounded by the state of Madhya Bharat.

Vindhya Pradesh was merged into Madhya Pradesh in 1956, following the States Reorganisation Act.[2]

Bundelkhand Division with its headquarters at Nowgaon comprised the following 6 districts:[1]

Baghelkhand Division with its headquarters at Rewa comprised the following 4 districts:[1] 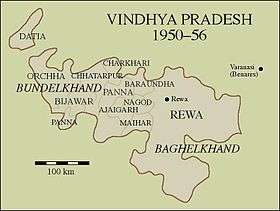 The nominal heads of the state were the Rajpramukh from 1948–49, the Chief Commissioner from 1949-March, 1952 and the Lieutenant Governor from March, 1952-31 October 1956. The state had a Vidhan Sabha comprising 60 members elected from 48 constituencies (36 single-member and 12 double-member).[3] There were 4 Lok Sabha constituencies in the state (2 single-member and 2 double-member).[4]

In the first general election in 1951, the Indian National Congress won 40 seats and the Socialist Party won 11 seats.[3] S.N.Shukla of Indian National Congress became the Chief Minister of the state on 13 March 1952, Shivanand became the Speaker and Ram Kishore Shukla of Socialist Party the leader of the opposition of the house. The house dissolved on 31 October 1956.