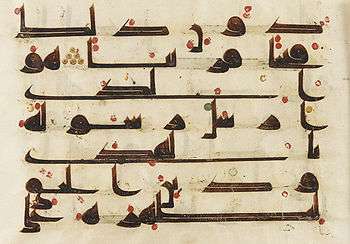 Kufic is the oldest calligraphic form of the various Arabic scripts and consists of a modified form of the old Nabataean script. Kufic developed around the end of the 7th century in Kufa, Iraq, from which it takes its name, and other centres.[1]

Kufic script used in a copy of the Qur'an

Kufic was prevalent in manuscripts from the 7th to 10th centuries.[2] Until about the 11th century it was the main script used to copy the Qur'an.[1] Professional copyists employed a particular form of kufic for reproducing the earliest surviving copies of the Qur'an, which were written on parchment and date from the 8th to 10th centuries.[3]

Kufic is commonly seen on Seljuk coins and monuments and on early Ottoman coins. Its decorative character led to its use as a decorative element in several public and domestic buildings constructed prior to the Republican period in Turkey.

The current flag of Iraq (2008) includes a kufic rendition of the takbir. Similarly, the flag of Iran (1980) has the takbir written in white square kufic script a total of 22 times on the fringe of both the green and red bands.

Square or geometric Kufic is a very simplified rectangular style of Kufic widely used for tiling. In Iran sometimes entire buildings are covered with tiles spelling sacred names like those of God, Muhammad and Ali in square Kufic, a technique known as banna'i.[4]

"Pseudo-Kufic", also "Kufesque", refers to imitations of the Kufic script, made in a non-Arabic context, during the Middle Ages or the Renaissance: "Imitations of Arabic in European art are often described as pseudo-Kufic, borrowing the term for an Arabic script that emphasizes straight and angular strokes, and is most commonly used in Islamic architectural decoration".[5]