Naval Cathedral of Saint Nicholas in Kronstadt, by Vasily Kosyakov.

The Byzantine Revival (also referred to as Neo-Byzantine) was an architectural revival movement, most frequently seen in religious, institutional and public buildings. It emerged in the 1840s in Western Europe and peaked in the last quarter of 19th century in the Russian Empire; an isolated Neo-Byzantine school was active in Yugoslavia between World War I and World War II. Neo-Byzantine architecture incorporates elements of the Byzantine style associated with Eastern and Orthodox Christian architecture dating from the 5th through 11th centuries, notably that of Constantinople (present-day Istanbul) and the Exarchate of Ravenna. 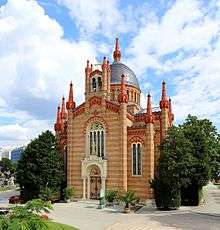 Earliest examples of emerging Byzantine-Romanesque architecture include the Alexander Nevsky Memorial Church, Potsdam, by Russian architect Vasily Stasov, and the Abbey of Saint Boniface, laid down by Ludwig I of Bavaria in 1835 and completed in 1840. The basilica followed the rules of 6th century Ravenna architecture, although its corinthian order was a clear deviation from the historical Byzantine art. In 1876 Ludwig II of Bavaria commissioned Neo-Byzantine interiors of the externally Romanesque Neuschwanstein Castle, complete with mosaic images of Justinian I and Greek saints.

Danish architect Theophil Hansen became a supporter of the style in the 1850s. His major works belonged to Neo-Grec style, however, Hansen as a professor of Byzantine art in University of Vienna shaped a generation of architects that popularized Neo-Byzantine architecture in Austro-Hungary, Serbia and post-war Yugoslavia. Hansen's own Neo-Byzantine work include the Holy Trinity Greek Orthodox Church, Vienna (1856—1858) and the Christuskirche in Matzleindorf (1858—1860).

Sophia Cathedral in Pushkin (1782—1788) was the earliest and isolated experiment with Byzantine treatment of otherwise neoclassical structures. In 1830s Nicholas I of Russia promoted the so-called Russo-Byzantine style of churches designed by Konstantin Thon. Nicholas I despised true Byzantine art; Thon's style in fact had little common with it. Notably, Thon routinely replaced the circular Byzantine arch with a keel-shaped gable, and the hemispherical Byzantine dome with an onion dome; layout and structural scheme of his churches clearly belonged to neoclassical standard.

True Byzantine art, popularized by Grigory Gagarin and David Grimm, was adopted by Alexander II of Russia as the de facto official style of the Orthodox Church. Byzantine architecture became a vehicle of Orthodox expansion on the frontiers of Empire (Congress Poland, Crimea, the Caucasus). However, few buildings were completed in the reign of Alexander II due to financial troubles. Alexander III changed state preference in favor of Russian Revival trend based on 16th-17th century Moscow and Yaroslavl tradition, yet Byzantine architecture remained a common choice, especially for large cathedrals. Neo-Byzantine cathedrals concentrated in the western provinces (Poland, Lithuania), the Army bases in Caucasus and Central Asia, the Cossack hosts and the industrial region in Urals around the city of Perm. Architects David Grimm and Vasily Kosyakov developed a unique national type of a single-dome Byzantine cathedral with four symmetrical pendentive apses that became de facto standard in 1880s-1890s.

The reign of Nicholas II was notable for the architects's turn from this standard back to Hagia Sophia legacy, peaking in the Naval Cathedral in Kronstadt and Poti cathedral. These designs employed reinforced concrete that allowed very fast construction schedule; their interiors contained clear references to contemporary Art Nouveau yet the exteriors were a clear homage to medieval Constantinople. Russian Neo-Byzantine tradition was terminated by the revolution of 1917 but was continued by emigrant architects in Yugoslavia and Harbin.

In the United States and elsewhere, the Neo-Byzantine style is often seen in vernacular amalgamations with other Medieval revivalist styles such as Romanesque and Gothic, or even with the Mission Revival or Spanish Colonial Revival styles.

Notable American examples include many buildings on the campus of Rice University in Texas, and Christ Church United Methodist in Manhattan by Ralph Adams Cram; Immaculate Conception Church in New Orleans, St. Francis de Sales Church in Philadelphia, Cathedral Basilica of St. Louis and the Basilica of the National Shrine of the Immaculate Conception built between 1920 and 1959 in Washington, D.C. In the early 1980s, Philip Johnson designed a Post-Modernist addition to the Cleveland Play House that reflects Byzantine influences, and could thus be termed Neo-Byzantine.

Westminster Cathedral (1895–1903), the Catholic cathedral in London, is the largest and most thorough British effort in the style, by John Francis Bentley (1839–1902), but there are a number of other churches and other buildings such as the Christ Church, Brixton Road, also in London, by Arthur Beresford Pite, 1897–1903, near the Oval Cricket Ground. From about 1850 to 1880 in Bristol a related style known as Bristol Byzantine was popular for industrial buildings which combined elements of the Byzantine style with Moorish architecture.