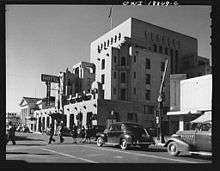 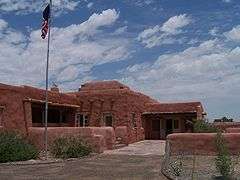 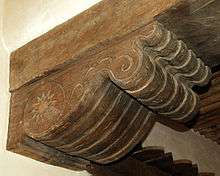 The Pueblo Revival style is a regional architectural style of the Southwestern United States, which draws its inspiration from the Pueblos and the Spanish missions in New Mexico. The style developed at the turn of the 20th century and reached its greatest popularity in the 1920s and 1930s, though it is still commonly used for new buildings. Pueblo style architecture is most prevalent in the state of New Mexico.

Pueblo-style architecture imitates the appearance of traditional Pueblo adobe construction, though more other materials such as brick or concrete are often substituted. If adobe is not used, rounded corners, irregular parapets, and thick, battered walls are used to simulate it. Walls are usually stuccoed and painted in earth tones. Multistory buildings usually employ stepped massing similar to that seen at Taos Pueblo. Roofs are always flat. Common features of the Pueblo Revival style include projecting wooden roof beams or vigas, which sometimes serve no structural purpose, "corbels", curved—often stylized—beam supports and latillas, which are peeled branches or strips of wood laid across the tops of vigas to create a foundation (usually supporting dirt or clay) for a roof.[1] [2] 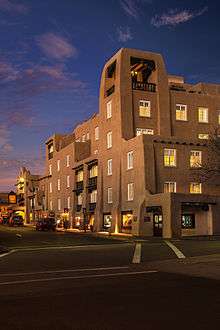 View of the La Fonda hotel from the southwest, built in 1922 and remodeled in 1929

The regional architecture from which the Pueblo style draws its inspiration is primarily found in New Mexico and Arizona, but also Colorado. Although the revival movement is most closely associated with the state of New Mexico, many early examples were built in other western states. In the 1890s, architect A. C. Schweinfurth incorporated Pueblo features into a number of his buildings in California.[3] Mary Elizabeth Jane Collter's Hopi House (1904) in Grand Canyon National Park drew heavily on the Pueblo style. In 1908, architect Isaac Rapp used the San Estevan Del Rey Mission Church as a template for his Colorado Supply Company warehouse in Morley, Colorado.[4]

The Pueblo Revival style made its first appearance in New Mexico at the University of New Mexico in Albuquerque, where UNM president William G. Tight adopted the style for a number of building projects during his tenure. The best known of these was his 1908 remodeling of Hodgin Hall, though a new heating plant and the Estufa were completed earlier. Nearly all subsequent university buildings have also employed the Pueblo style, albeit in increasingly loose interpretations.

The other stronghold of Pueblo-style architecture is Santa Fe, where it was popularized in the 1920s and 1930s by a group of artists and architects seeking to establish a unique regional identity. In 1957, a committee led by John Gaw Meem drafted Santa Fe "H" Historical District Regulations Ordinance No. 1957-18,[5] commonly known as the Historical Zoning Ordinance. This ordinance mandated the use of the "Old Santa Fe Style," which encompassed "so-called Pueblo, Pueblo-Spanish or Spanish-Indian and Territorial styles," on all new buildings in central Santa Fe.[6] This ordinance remains in effect, meaning the Pueblo style continues to predominate.

Pueblo-style houses are still frequently constructed in Albuquerque, Santa Fe, and elsewhere. Updated versions of the style have also been used for newer commercial and public buildings such as the Albuquerque International Sunport terminal (1966) and the newer UNM buildings.

This article is issued from Wikipedia - version of the 12/3/2015. The text is available under the Creative Commons Attribution/Share Alike but additional terms may apply for the media files.