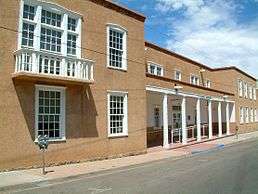 Territorial Revival architecture describes the style of architecture developed in the U.S. state of New Mexico in the 1930s that incorporated elements of traditional regional building techniques with higher style elements. The style, named after the New Mexico Territory (1850-1912), was intended to recall the state's Territorial history and was extensively employed for state government buildings in Santa Fe. The style was encouraged by a State Planning Board proclamation of 1934, which advocated the redesign of the state capitol in "the local Santa Fe type of architecture."[1] Distinguishing features of the style are the use of adobe construction with low, flat roofs with a sharp brick edging, and sash windows.[2] 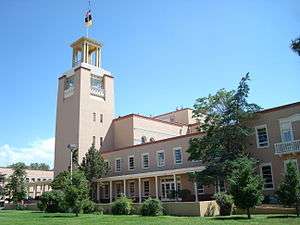 Territorial architecture was current in the New Mexico Territory from about 1848 until 1900. The original style was adapted to domestic architecture, typically of one story. Doors and windows sometimes featured pediments or decorative trim reminiscent of Greek Revival architecture.[3] The revival style was applied to much larger buildings and is confined to New Mexico.

The Territorial Revival style continues to be popular in New Mexico into the 21st century, particularly for commercial buildings, small offices and strip malls.

This article is issued from Wikipedia - version of the 8/12/2015. The text is available under the Creative Commons Attribution/Share Alike but additional terms may apply for the media files.