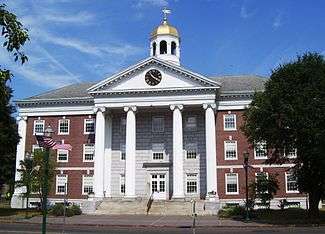 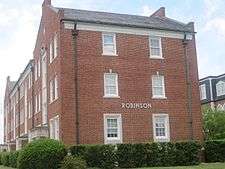 Historic Robinson Hall on the Louisiana Tech University campus in Ruston, Louisiana, is named for the second president of the institution, William Claiborne Robinson

Colonial Revival (also Neocolonial, Georgian Revival or Neo-Georgian) architecture was and is a nationalistic design movement in the United States. Part of a broader Colonial Revival Movement embracing Georgian and Neoclassical styles, it seeks to revive elements of architectural style, garden design, and interior design of American colonial architecture.

The Centennial Exhibition of 1876 reawakened Americans to their colonial past. This movement gained momentum in the 1890s and was accelerated by the early 20th century advent of the automobile, which expanded the ability of ordinary Americans to visit sites connected with their heritage.

Successive waves of revivals of British colonial architecture have swept the United States since 1876. In the 19th century, Colonial Revival took a formal style. Public interest in the Colonial Revival style in the early 20th century helped popularize books and atmospheric photographs of Wallace Nutting showing scenes of New England. Historical attractions such as Colonial Williamsburg helped broaden exposure in the 1930s.

In the post-World War II era, Colonial design elements were merged with the then popular ranch-style house design. In the early part of the 21st century, certain regions of the United States embraced aspects of Anglo-Caribbean and British Empire styles. 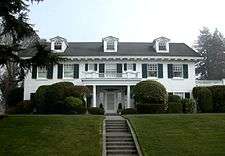 Colonial Revival sought to follow American colonial architecture of the period around the Revolutionary War, which drew strongly from Georgian architecture of Great Britain.

Structures are typically two stories with the ridge pole running parallel to the street, have a symmetrical front facade with an accented doorway, and evenly spaced windows on either side of it. 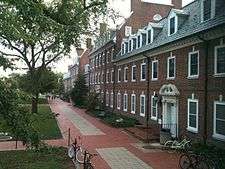 Brown and Sypherd Residence Halls, University of Delaware. Much of the central campus is built in Colonial Revival style.