This article is about the region surrounding and including the City of Calgary in Alberta, Canada. For other uses, see Calgary (disambiguation).

The Calgary Region is a major transportation hub for southern Alberta, Saskatchewan, eastern British Columbia, and parts of the northern United States. It is home to the Calgary International Airport, the third busiest airport in the country in terms of total aircraft movements.[2]

The Calgary CMA, as defined by Statistics Canada, includes the following nine municipalities:[3]

Also in terms of area, the Calgary CMA makes up approximately 40% of Statistics Canada's Division No. 6 in Alberta.[4][5] The balance of Division No. 6 includes the census consolidated subdivisions of the MD of Foothills No. 31 to the south and Mountain View County to the north.[6]

The MD of Foothills No. 31 and the municipalities within are often considered as part of Calgary's metropolitan area due to, among other things, the MDs shared boundary with the City of Calgary and the bedroom community nature of towns like Okotoks, High River, Black Diamond and Turner Valley.

Founded in 1999,[7] the Calgary Regional Partnership (CRP) is a cooperative between 15 urban municipalities in the greater Calgary area that deals with regional growth and planning issues.[8] The CRP's motto is Thinking regionally... acting locally...[8]

The CRP's current membership includes three cities (Airdrie, Calgary and Chestermere), nine towns (Banff, Black Diamond, Canmore, Cochrane, Irricana, Nanton, Okotoks, Strathmore, and Turner Valley), and one townsite (Redwood Meadows).[8][9] Of these thirteen municipalities, four of the ten towns (Banff, Canmore, Nanton, and Strathmore) are outside, but in proximity to, the Calgary Region's boundaries as defined in this article. Of the remaining six towns, three of them (Black Diamond, Okotoks, and Turner Valley) are outside of the Calgary CMA boundaries as defined by Statistics Canada.

Membership in the CRP once consisted of the four municipal districts and two additional towns. These included the MD of Bighorn No. 8, the MD of Foothills No. 31, Rocky View County, Wheatland County and the towns of Crossfield and High River. The MD of Bighorn No. 8 pulled out of the CRP in March 2009 due to the lack of opportunity for infrastructure connectivity to the balance of the Calgary Region.[10] In June 2009, the latter three opposed the Calgary Metropolitan Plan that was being considered for approval by the CRP's member municipalities.[11][12] All three subsequently withdrew from the CRP in September 2009.[12][13][14] Crossfield and High River withdrew from the CRP in December 2011 and April 2013 respectively citing concerns that the CRP was becoming another layer of government.[15][9]

In an attempt to bring the MD of Foothills No. 31 and Rocky View County back to the CRP, Alberta's Minister of Municipal Affairs, Doug Griffiths, requested that the two municipal districts and the CRP engage in mediation.[16] All parties agreed to participate and the mediation process has since concluded with a report delivered to Minister Griffiths for review and decision.[17] 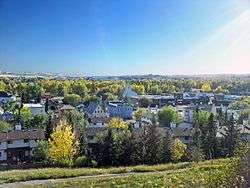 The following is a list of municipalities in the Calgary Region. Those municipalities that are within the region and are either part of the Calgary CMA, members of the CRP or both are indicated accordingly. CRP members that are proximate to, yet located outside of, the Calgary Region, such as Banff, Canmore and Strathmore, are not listed as they are located within the neighbouring regions of Alberta's Rockies and southern Alberta.