The base occupies approximately 41 square kilometres (10,000 acres) at the southern tip of Vancouver Island on the Strait of Juan de Fuca, in and around the municipality of Victoria, British Columbia, adjacent to the western limit of the provincial capital, Victoria.

The present dockyard and drydock, known as Her Majesty's Canadian (HMC) Dockyard Esquimalt, dates to the Royal Navy's Esquimalt Royal Navy Dockyard (1842–1905) and was the Royal Navy's Pacific Station until 1911; Today it serves as the Canadian Naval Headquarters in the Pacific.

Due to their significance in Canadian naval history, four sites at CFB Esquimalt (the dockyard, the former Royal Navy Hospital, the Veterans’ Cemetery and the Cole Island Magazine) have been designated the Esquimalt Naval Sites National Historic Site of Canada.[2]

HMCS Aurora, HMCS Patriot, and HMCS Patrician at Esquimalt in 1921. 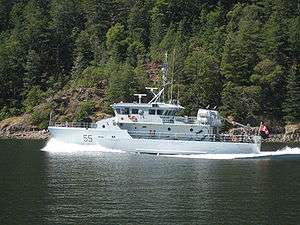 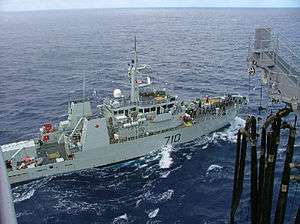 HMCS Brandon, minesweeper based out of CFB Esquimalt 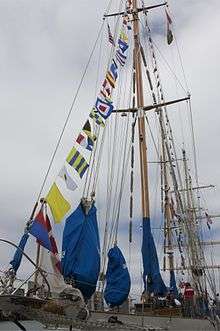 HMCS Oriole, sail training ship based out of CFB Esquimalt

CFB Esquimalt contains several recognized and classified federal heritage buildings on the Register of the Government of Canada Heritage Buildings.[4]

CFB Esquimalt Naval & Military Museum is located at HMCS Naden.[7] Building 20 (c. 1891), part of Naden Museum Square is a Municipal Heritage Property.[8] Building 37 (c. 1889) part of the Naden Museum Square is also a Municipal Heritage Property and is also on the Canadian Register of Historic Places.[9] HMCS Naden was named after the Dominion Government Ship Naden, which was commissioned as a tender for the Royal Naval College of Canada from 1918 to 1922 for training in sail.[10] The museum is affiliated with: CMA, CHIN, OMMC and Virtual Museum of Canada. 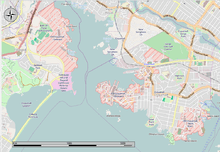 Map showing the three areas of the base.

The Lookout is the base newspaper, which covers local, national and international news with specific interest to Navy and Canadian Forces members and family issues.[11]

Other properties that are part of CFB Esquimalt include the Albert Head training area near Albert Head, Metchosin, located approximately 30 kilometres (19 mi) by road southwest of downtown Victoria. It occupies approximately 88 hectares (220 acres), 4 of which are developed as training facilities. Fort Albert Head was established in the late 1800s along with Fort Rodd Hill and other installations, to provide shore defence for the Strait of Juan de Fuca and Victoria Harbour. The training area is used for Regular and Reserve Force training throughout nine months of the year and is home to the Regional Cadet Instructor School (Pacific) that trains Canadian Forces Cadet Instructors Cadre (CIC) Branch that deliver the cadet program. During the summer months of June, July and August the area houses the Albert Head Air Cadet Summer Training Centre. Canadian Forces Maritime Experimental Test Range at Nanoose Bay is also part of CFB Esquimalt. The facility provides non-explosive technical testing of sonobouys, torpedoes and other equipment. Naval Radio Station Aldergrove in the Fraser Valley houses transmitting and receiving equipment for long distance communications.