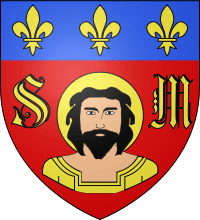 In heraldry, carnation is a tincture, the name for skin colour,[1][2] more exactly the colour of pale or white human skin[3] (i.e., pale pinkish peach).

It is rare in coats of arms in Anglophone countries but quite frequent on the European continent, in France in particular, derived from widespread use in German heraldry. In its rare appearances in the Anglophone heraldries, it is not only used for European flesh tones as in a crown rayonny or supported by two cubit arms, dexter carnation, sinister skeletal proper (crest of The Royal Australian and New Zealand College of Radiologists)[4] but also as a general pink colouring as in a horse passant argent bridled saddled and trappings or, on its head a plume of three feathers carnation (crest of The Worshipful Company of Saddlers, England).[5]

Carnation should not be distinguished entirely from rose as used in Canadian heraldry (e.g. A plate charged with three arrows, two in saltire one in pale, points in base, their feathers each terminating in a maple leaf azure, within an orle of bezants alternating with rose flowers rose, the plate encircled by a chain, the links alternately or and azure badge of Hutchison, Canadian Public Register vol. IV p. 104), as both are pinks.

In continental heraldry, carnation and rose are two distinct tinctures: carnation is quite frequently used yet nearly exclusively to color human skin when no tincture is mentioned (or when charges are blazoned as proper), while rose is extremely rare and can be any distinct shade of our common pink.